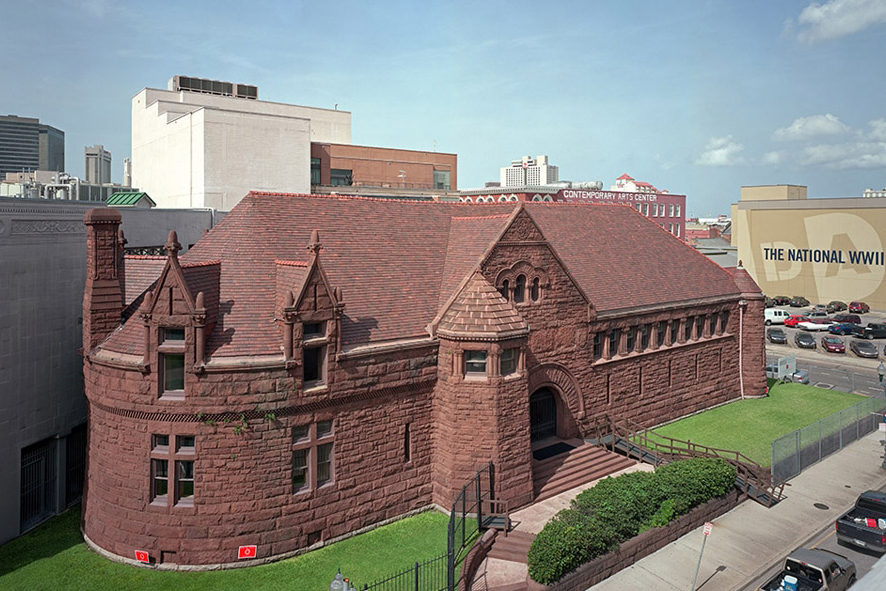 Have you ever walked by that massive, copper-colored stone building on the corner of Camp Street and Andrew Higgins Boulevard and wondered: What is that? Who owns it? What happens inside of it?

You’re surely not alone! Considering practically all of its neighboring buildings were constructed in the 20th or 21st century, the Patrick F. Taylor Library astounds tourists and New Orleans residents alike with its thick walls, semi-circular arched entrance and rounded towers. All of these features are central characteristics of the Romanesque architectural style popular in medieval Europe. Upon entering the Library, eyes are drawn toward the dome-vaulted, wooden ceiling and its 16 dragon heads jutting out toward the center of the room from the rounded walls.

How did a building of such stature end up in New Orleans? The building’s style and design seem so foreign to the place and year in which it was constructed (1889). Originally, the building was deemed the Howard Memorial Library, dedicated to the founder of the Louisiana State Lottery Company, Charles T. Howard. This odd treasure of a building was designed by Henry Hobson Richardson, a Louisiana native who worked primarily in the Northeast. The Howard Memorial Library, the last of Richardson’s works in a group of public library projects, was actually a design to be implemented in East Saginaw, Michigan. After his death in 1886, a Boston architectural firm committed to Richardson’s legacy took over the project.

Although foreign to the late 19th century American architectural approaches such as the flat roofs and horizontal lines of the Prairie School or the skyscrapers of the Chicago School, the Romanesque style of the Howard Memorial Library was the heart of Richardson’s work. Architects and critics have now come to describe his unique and revival style as “Richardsonian Romanesque.”

Now what about that building adjacent to the Patrick F. Taylor Library on Camp Street? Its reddish hues and semi-circular arches look similar to the Library. Are they connected? The short answer is: Not anymore.

Even though it was built in the late 1800s as a Louisiana reference library, you won’t find books there. The Library’s collections were transferred to Tulane University in the mid 20th century, and the space was repurposed for war efforts. After several more transformations (radio station, office spaces and a law firm), restorations and a name change in 1989 marking its centennial, the Patrick F. Taylor Library was acquired by the University of New Orleans Foundation to be executed as the Ogden Museum of Southern Art, University of New Orleans.

Today, the Ogden Museum primarily utilizes the Library as a venue space for events such as our annual O What a Night! Gala and in some cases, the weekly Ogden After Hours entertainment series for larger performances. The venue also hosts our free screenings of Southern films open to the public, our annual King Cake Walk and holiday art markets. Couples are drawn to the Library’s rustic beauty for wedding ceremonies and receptions. Nonprofits, organizations and companies alike rent the space for dinners or cocktail mixers. Needless to say, the Patrick F. Taylor Library has become an integral space for programming and events at the home of Southern art.

Read the Full History of the Library Host your next event at the Patrick F. Taylor Library