Celebrate and Support the Art of the American South

IMPORTANT UPDATE ON O WHAT A NIGHT! GALA 2021

O What a Night! Gala has been moved from Saturday, October 17, 2021 to Saturday, January 15, 2022. After much consideration and in light of recent city-wide recovery efforts due the impact of Hurricane Ida, the Board of Trustees, Gala Committee and Museum Staff have rescheduled the celebration in favor of the city’s continued recovery efforts post Hurricane Ida and for the arts community, hospitality partners and patrons to fully recover.⁣
⁣
Since 2004, O What a Night! has been an annual event to celebrate the art and artists of the American South while raising money for Ogden Museum and its educational mission. This year Ogden Museum is proud to honor Sally Mann, an internationally recognized American photographer from Lexington, Virginia, with the annual Opus Award, given each year to a member of the arts community whose life’s work constitutes a major contribution to the cultural landscape of the South.⁣
⁣
Ogden Museum would like to thank O What a Night! sponsors, benefactors, patrons and participating artists for continuing to support this event, which is the Museum’s largest fundraiser. Tickets that were originally purchased for the October 17, 2021 date will be applied to the January 15, 2022 event date. ⁣

Ogden Museum of Southern Art will host its annual O What a Night! Gala in-person on Saturday, January 15, 2022 at 6 p.m.!

Ogden Museum of Southern Art, dedicated to broadening the knowledge, understanding, interpretation and appreciation of the visual arts and culture of the American South, will hold its annual O What a Night! Gala honoring internationally recognized photographer and author, Sally Mann, on Saturday, January 15, 2022, along with a Patron Party and auction preview on Thursday, January 13, 2022 from 5-9 p.m. at the home of Jason Waguespack and Jeffery Morgan. 2021 Co-chairs Beverly Dale and Dale A. Mott invite you to join them at the O What a Night! Gala, which sells out every year and plays host to affluent and influential patrons from New Orleans and across the country. This evening is not only an experiential celebration of the very best in Southern art, music and food, but also provides critical funds for Ogden Museum’s award-winning educational programs and our dynamic exhibitions.

What makes this event so special? The people and the art! People from all over the country will be able to bid on works of art in the live and silent art auctions. Year after year, art collectors look forward to viewing all of the beautiful works of art created by artists of the South.

This year, the O What a Night! silent auction preview and cocktail hour will take place in Goldring Hall to allow for ample social distancing. Overall event capacity is also reduced.

Attendees must provide proof of at least one dose of an approved COVID vaccine or a negative PCR test within 72 hours to access. We will accept original vaccine cards, the LA Wallet app or high-resolution photos of both sides of your vaccine card as proof of vaccination. Physical copies or a photo of a negative PCR test will also be accepted. Masks required at all times except when actively eating or drinking.

The format of the event is subject to change depending on local, state and CDC guidelines.

• Name recognition as Patron Host on all print and digital materials including 2,000 printed invitations and 400 event programs and catalogs

The format of the event is subject to change depending on local, state and CDC guidelines.

Wine Experience in the Champagne Region of France 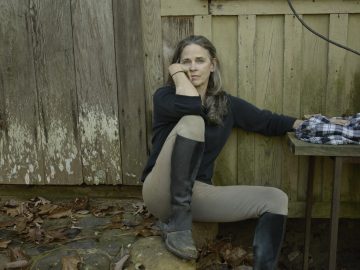 To be able to take my pictures, I have to look, all the time, at the people and places I care about. And I must do so with both ardor and cool appraisal, with the passions of eye and heart, but in that ardent heart there must also be a splinter of ice.

Sally Mann is known for her photographs of intimate and familiar subjects rendered both sublime and disquieting. Her projects explore the complexities of familial relationships, social realities, and the passage of time, capturing tensions between nature, history, and memory.

Born in Lexington, Virginia, Mann began to study photography in the late 1960s, attending the Ansel Adams Gallery’s Yosemite Workshops in Yosemite National Park, California and the Putney School and Bennington College, both in Vermont. She received a B.A. from Hollins College, Roanoke, Virginia, in 1974, and an M.A. in creative writing the following year. At a moment when many other photographers were creating large-scale color prints, Mann looked to photography’s past, investigating the visual and metaphorical potential of employing nineteenth-century technologies. She has long used an 8 x 10 bellows camera and has explored platinum, bromoil, and wet-plate collodion processes for making prints.

Mann had her first solo museum exhibition at the Corcoran Gallery of Art, Washington, D.C., in 1977, presenting The Lewis Law Portfolio (1974–76), a series of black-and-white photographs that comprise some of her earliest explorations into the inherent abstract beauty of the everyday. In the early 1980s she published two books, Second Sight and At Twelve, the latter a study of young girls on the cusp of womanhood. Between 1984 and 1994 she worked on the series Family Pictures, which focused on her three children, then all under the age of twelve. These works touch on ordinary moments—playing, sleeping, and eating—as well as larger themes such as death and cultural perceptions of sexuality and motherhood. From 1999 to 2012, Mann photographed Cy Twombly’s warmly lit studio in Lexington, recording the moments she spent with him there as well as the traces of his artistic life.

From the late 1990s into the 2000s, Mann honed in on her relationship with the American South, taking photographs in Alabama, Mississippi, and Louisiana for her Deep South series (2005), as well as Civil War battlefields for Last Measure (2000). Her longtime interest in themes of death, time, and decay are also evident in What Remains (Bullfinch Press, 2003), a five-part study of mortality ranging from pictures of the decomposing body of her beloved greyhound to photographs of the site where an armed fugitive committed suicide on her property. In 2003, Mann began documenting the effects of muscular dystrophy on her husband, Larry. These candid and frank portraits, which would later become the Proud Flesh series (2009), recall classical sculpture while capturing a male subject in moments of intimate vulnerability.

Mann’s latest large-scale project, A Thousand Crossings, further explores the complex cultural identity of the American South, as well as Mann’s relationship with her place of origin—a region rich in literary and artistic traditions but troubled by history. The exhibition, which she began working on in 2006, debuted at the National Gallery of Art, Washington, DC in 2018 and has since traveled extensively in the United States and abroad in Paris.

A Guggenheim fellow and a three-time recipient of the National Endowment for the Arts fellowship, Mann was named “America’s Best Photographer” by Time magazine in 2001. She has been the subject of two documentaries: Blood Ties (1994), which was nominated for an Academy Award, and What Remains (2006), which premiered at Sundance and was nominated for an Emmy for Best Documentary in 2008. Mann’s Hold Still: A Memoir with Photographs (Little, Brown, 2015) received universal critical acclaim; it was named a finalist for the 2015 National Book Awards and in 2016 won the Andrew Carnegie Medal for Excellence in Nonfiction.