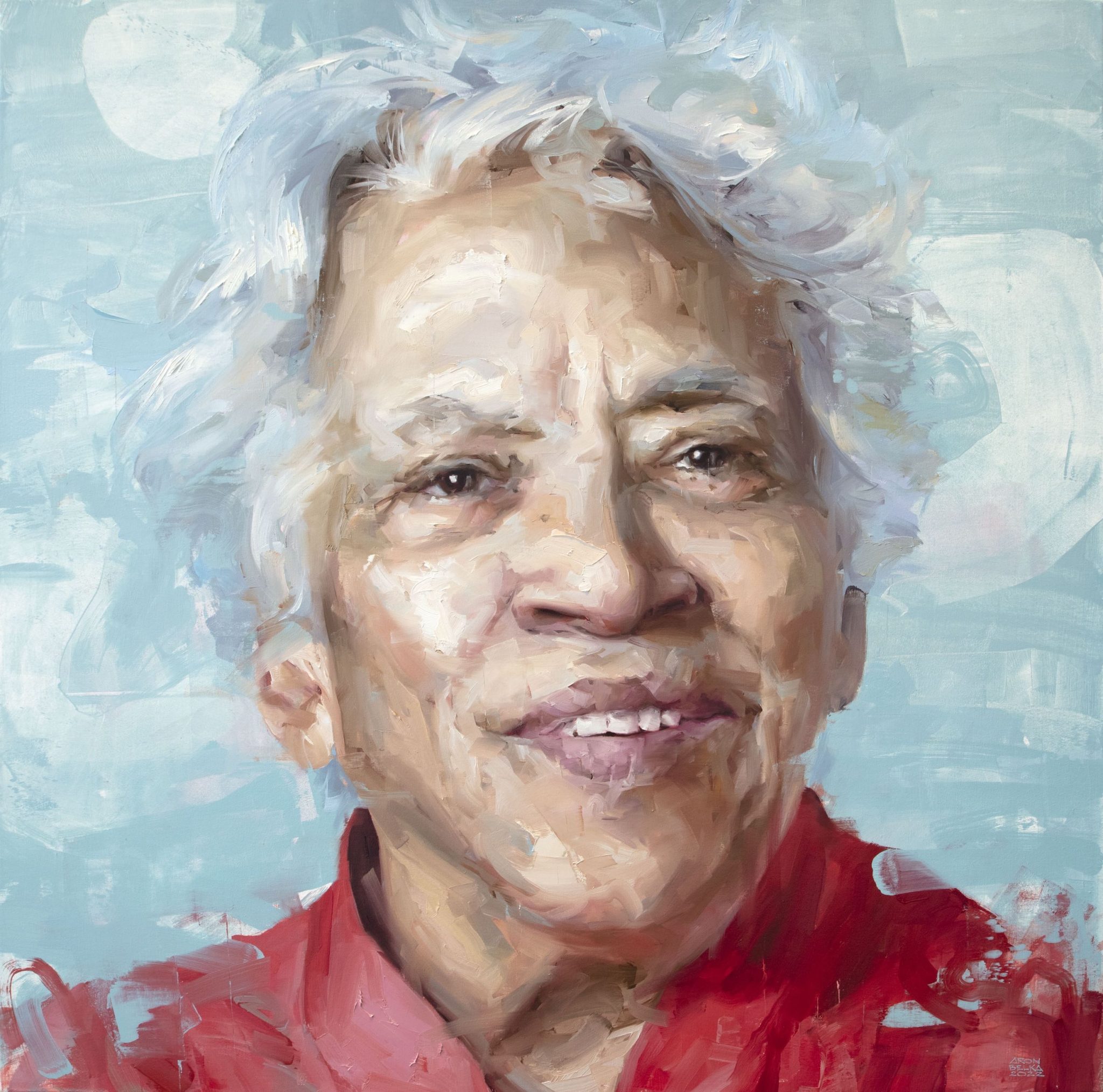 This portrait of New Orleans’ chef and “Queen of Creole Cuisine,” Leah Chase, is appropriately larger than life as is Chase’s legacy as an advocate for both Creole cooking and African-American art. Her restaurant, Dooky Chase, became central to the Civil Rights movement in the 1960s, providing a safe place for meetings with leading figures of the movement including A.P. Tureaud, Ernest “Dutch” Morial, Martin Luther King, Jr. and the Freedom Riders. Over the years, she fed scores of luminaries – such as Sarah Vaughn, Nat King Cole, James Baldwin, Ray Charles and two US Presidents, George W. Bush and Barack Obama. She would often say, “In my dining room, we changed the course of America over a bowl of gumbo and some fried chicken.”

Born in Madisonville, a small town on the north shore of Lake Pontchartrain, on January 6, 1923 – Mrs. Chase moved to New Orleans in the 7th grade to attend Catholic High School. She met Edgar “Dooky” Chase Jr., a jazz trumpeter and band leader, in 1945. Three months later they were married. Together they operated one of the only fine dining restaurants in New Orleans for African Americans during the Jim Crow Era. Her restaurant also become an art gallery, filled with works by major figures in Black American Art including Jacob Lawrence, Elizabeth Catlett and John Biggers, among others.

Leah Chase died on June 1, 2019. Her restaurant still operates in the Treme neighborhood of New Orleans, run by her family.

“My paintings are representative but I like the pull between abstraction and representation. The 21st century is filled with smartphones and laptops and little cameras from which we receive fragmented pictures of life and the world. As a result, I enjoy fragmenting my own subject matter when I paint, and I primarily make large paintings that inescapably address the viewer, forcing people to stop and really look at the picture.”

New Orleans-based artist Aron Belka was born in Salt Lake City, Utah in 1974 and earned his BFA in illustration from Utah State University in 1998. He has exhibited in numerous venues including Ogden Museum of Southern Art, the Alexandria Museum of Art, and a solo exhibition at the Marietta/Cobb Museum of Art in Georgia. He won the Juror’s Choice Award at the 2017 Huntsville Museum of Art’s Red Clay Survey and was announced the inaugural and prestigious COHN-GNOF-NOLA- ARTS award program winner in October 2021. Aron was an artist in residence at the Joan Mitchell Center in New Orleans in 2016 and more recently at the Cill Rialaig Project in County Kerry, Ireland in 2019. Belka’s paintings are included in numerous private and public collections including the New Orleans Jazz and Heritage Foundation, the Alexandria Museum of Southern Art, the Huntsville Museum of Art and Ogden Museum of Southern Art.