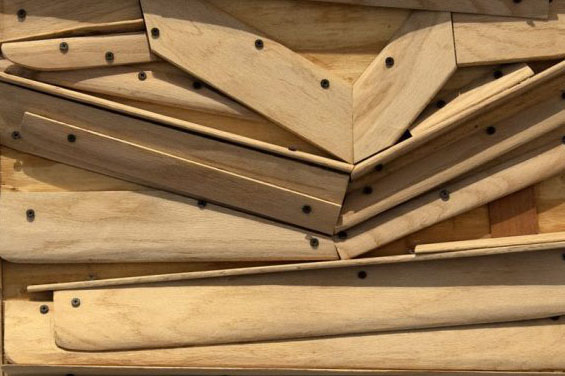 Curated Conversation with What Music is Within Artist, John Barnes

Join What Music is Within artist, John Barnes, and Bradley Sumrall, Curator of the Collection, as they discuss Mr. Barnes’ studio practice, career and inspiration. The conversation will be posted to the O Blog at noon on Thursday.

John Barnes is a sculptor who mainly deals in wood assemblages. Barnes first took an interest in art when he enrolled in the Baton Rouge public school system, but his passion flourished while enrolled at Southern A&M University. Using wood found in his Algiers neighborhood, Barnes pieces the debris and refuse into intricate designs influenced by racial politics, gentrification and income inequality. New Orleans and the Mississippi Delta region, more broadly, form the backdrop for the artist’s work, while the material, subject matter and final display are directly of the place.

Barnes is currently the director of the Visual Arts Program at Dillard University, a position he has held since 2004. John Barnes’ assemblages have been on exhibit all around New Orleans, and he was featured in the Prospect.1 International Biennial in 2008.

ABOUT WHAT MUSIC IS WITHIN: BLACK ABSTRACTION FROM THE PERMANENT COLLECTION

“My poetry, I think, has become the way of my giving out what music is within me.” ― Countee Cullen

At a time when American museums are reassessing the history of 20th century art by correcting the omissions of the past and including more artists of color in meaningful and significant ways in collections and exhibitions, What Music is Within: Black Abstraction from the Permanent Collection presents some of the strongest voices from the Ogden Museum of Southern Art’s permanent collection. These works use abstraction as a powerful modality of expression. Each of these artists project their own voice to convey their individual visions. With work that spans almost five decades, this exhibition includes masters such as Sam Gilliam and emerging practitioners like Horton Humble. The critical contributions of Xavier University, a keystone New Orleans art program, is also strongly represented through artists John T. Scott, Ron Bechet, Martin Payton and Jeffrey Cook.

The creative process is a highly individual and personal endeavor – a way of giving physical form to abstract ideas or emotions. The African American artists in this exhibition all have deep ties to the American South and they each create through the language of abstraction. Yet, even with those shared elements of identity, they maintain strong unique voices, expressing, as Countee Cullen wrote, “what music is within.”