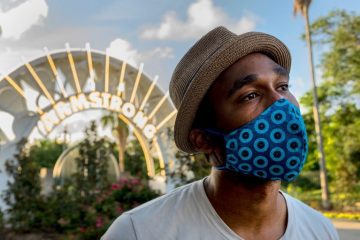 Edward Wycliff is the owner and designer of Bow Shoeshoe – Mountain Kingdom Clothing, an ethical apparel company based in New Orleans, Louisiana and Lesotho. Wycliff served as a Pease Corps Volunteer in Lesotho in 2014-2015, working on an HIV/AIDS project in one of Lesotho’s most remote mountain ranges. Wycliff has been working with these communities in Lesotho to produce garments with the local fabric, focusing on a community-driven model of production. The company began producing bow ties in 2015. In an effort to pivot due to COVID-19, Wycliff began organizing teams in Lesotho, South Africa and New Orleans to produce face masks with the same vibrant textiles. Originally from Houston, Texas, Wycliff holds a B.A. in Politics from Ithaca College, an M.S. in Conflict Resolution and Governance from Universiteit van Amsterdam. He has been living between New Orleans and southern Africa for the past six years.

Purchase works by Edward Wycliff in the Museum Store today!