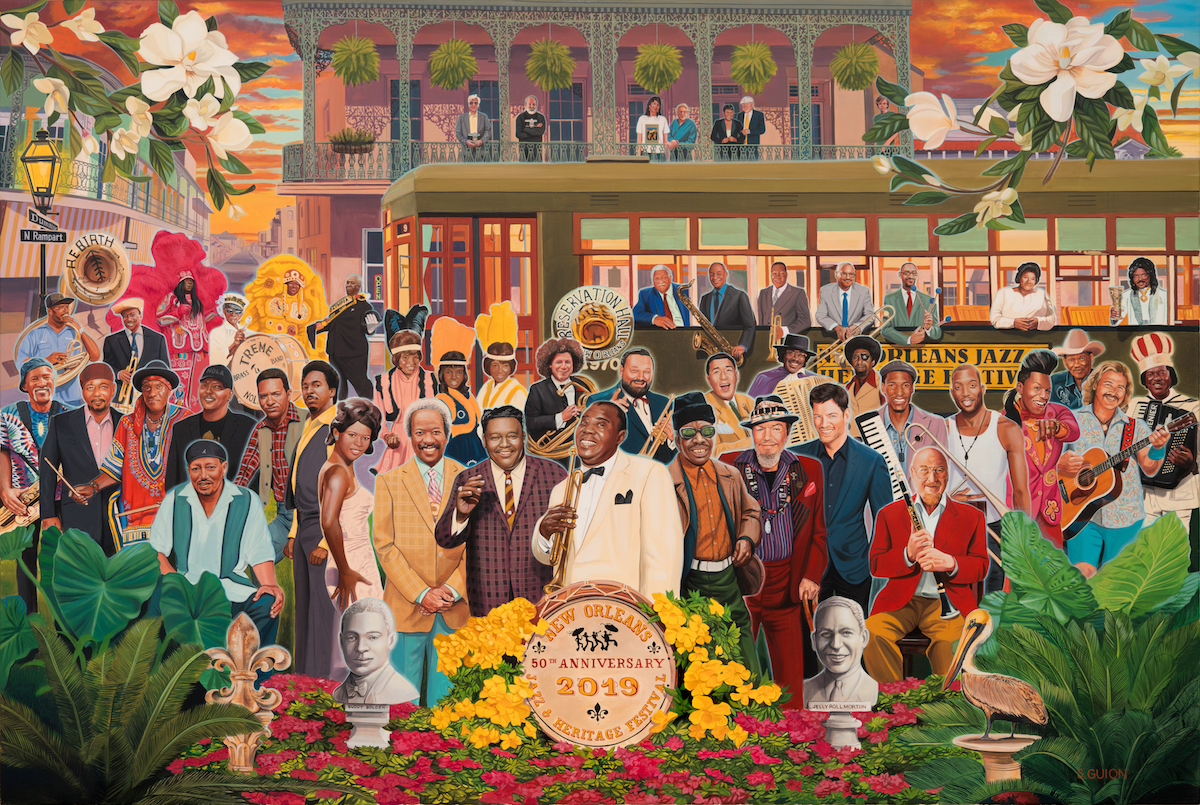 Since its inception in 1975 by Bud Brimberg, the Jazz Fest poster has become a long standing and singular highlight of the annual celebration of music and culture in New Orleans. The poster provides great support for the New Orleans Jazz & Heritage Festival Foundation and encapsulates the energy and enthusiasm for each year’s festival. The 50th Anniversary of Jazz Fest presented a distinct opportunity – and challenge – to showcase the history of the festival, its celebrated poster and the city of New Orleans in a single dynamic image. After a two-year search, the poster publisher, Art4now, selected the brilliant scenic portraitist Scott Guion to capture this seminal moment.

Scott Guion is an artist and musician born in New Orleans in 1971. His murals and paintings are in museums, entertainment venues and private collections across the US. His large-scale commissions for the House of Blues, Hard Rock Cafe, B.B. King’s Blues Cafe and The Grand Ole Opry are widely admired for their brilliant synthesis of music, personality and paint.

Guion’s Family Portrait: Jazz Fest at 50 summarizes a half-century of those who influenced and played the event, while tipping its hat to the parallel history of the poster series that helped define it. Guion was inspired by Art Kane’s iconic photo A Great Day in Harlem, the 1958 black-and-white photograph of 57 jazz musicians.

In anticipation for the final composition, he created an extensive series of studies and paintings of some of New Orleans greats such as Professor Longhair, James Booker and Louis Armstrong. A selection of these works are currently on view at the Ogden Museum alongside the sketch, final painting and screenprint of Family Portrait: Jazz fest at 50 to mark the golden jubilee of the festival and the poster that commemorates it.

Come by the O and check out the original 2019 New Orleans Jazz & Heritage Festival painting and poster on view until May 12!