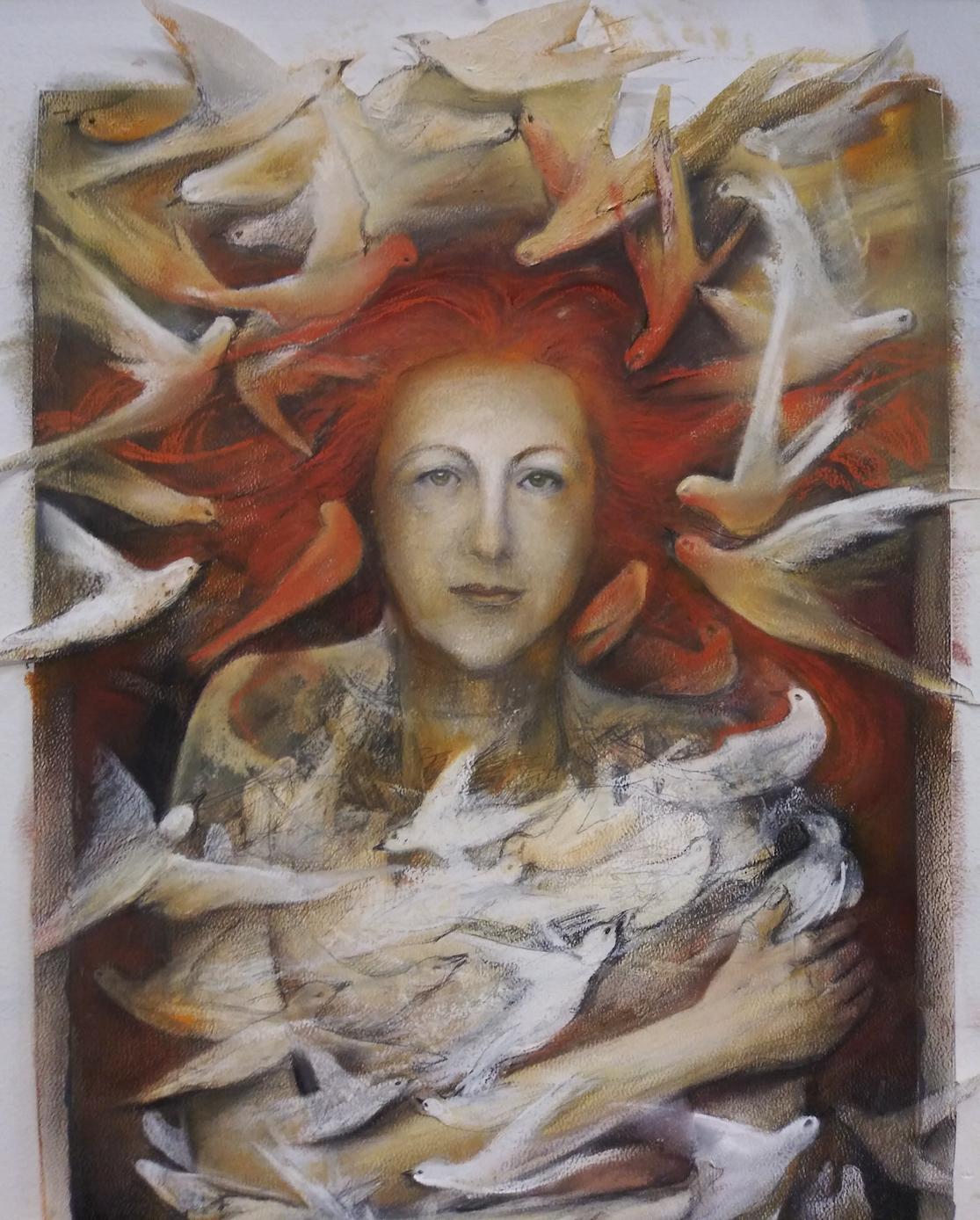 When the concepts for the exhibition, Entwined: Ritual Wrapping and Binding in Contemporary Southern Art, first starting coalescing in my mind, there were a few artists that I knew would be the backbone of the show conceptually – artists including Jeffrey Cook, Kristin Meyers and Sharon Kopriva. I had first encountered Sharon’s work in a New Orleans Gallery in 2009. A work from that exhibition, Helen’s Gate, is now part of the Museum’s permanent collection. I first met Sharon, herself, in Houston while working on an exhibition for her former teacher, John Alexander. The meeting led to a studio visit, which led to a major survey of her work in 2012 at the Ogden Museum – From Terra to Verde: The Art of Sharon Kopriva. Through that experience, Sharon and I became dear friends.

In recent years, Sharon’s sculptural work had intentionally made a turn towards abstraction through a series she titled Tubers. Working with rope, she wrapped the material around empty space, allowing the rope to guide her hands, binding the fiber together till an abstracted human form emerged. This was the work that I had envisioned for the exhibition. In the studio, though, I saw how that process and those forms had begun to influence her works on paper. Building upon the scale and composition of another series, Muses, she created a 5-panel human-scale drawing about women breaking free from their bonds (both physically and mentally). I began to see how the wrapping ritual and binding practice in her sculptural work had begun to influence her drawing, both conceptually and compositionally. I decided to include Breaking Bonds in the exhibition. It was also a conceptual breakthrough for me, opening the exhibition to 2-dimensional representation of the wrapping and binding process.

When I next visited Kopriva’s studio, a new work was in process – a work of unusual power and personal significance for the artist – Red Headed Witness. I recognized the figure immediately as Nancy Kienholz, a major figure in the art world and a huge presence in Kopriva’s life. Kienholz had just passed away a few months before, and this piece of paper on Kopriva’s studio wall would come to hold so much of Sharon’s emotions about that loss by the time it was completed.

Sharon Kopriva first met Ed and Nancy Kienholz in Houston in 1987 at the grand opening of the Menil Collection. Ed was an icon of the West Coast avant-garde scene beginning in the 1950s – a ground-breaking artist who co-founded the influential Ferus Gallery in Los Angeles with curator Walter Hopps and poet Bob Alexander. He married Nancy Reddin – daughter of famed LAPD Chief, Thomas Reddin – in 1972, becoming a collaborative art couple. All work by both artists between 1972 and 1994 is simply credited as Kienholz.

After attending a residency in the Kienholz converted schoolhouse in Hope, Idaho, Kopriva traded artwork for land, and built a summer home in the forest. She became summer neighbors with Ed and Nancy. Ed and Nancy Kienholz bought a house in Houston around the same time, after living in an apartment owned by Dominique de Menil for a season. The Koprivas and the Kienholzs spent much of the year as neighbors and friends – both in Idaho and in Houston – breaking bread often and discussing art always. Ed became a major influence on Kopriva, and Nancy became a lifelong friend and mentor. Although Ed Kienholz only lived in Houston for about five years (he died of a heart attack in 1994) – Nancy Kienholz divided her time between Idaho, Berlin and Houston for almost 30 years.

On August 7, 2019, Nancy Reddin Kienholz died in her home in Houston at the age of 75. In a private ceremony, she was interred into the driver seat of the same 1940 Packard coupe containing the body of Ed Kienholz that she had steered into their grave site 25 years before. Shortly thereafter, Sharon Kopriva began Red Headed Witness.

In this human-scaled painting on heavy archival paper, Kopriva depicts Nancy Kienholz wrapped in a cyclone of white birds. Her gaze is directed at the viewer, calm and knowing, and her fiery hair is floating among the flutter of bird wings. She worked on the piece for months, drawing and re-drawing the birds, giving wings to her own reflections on Nancy’s life and career, on a 30-year friendship and the impact they had on one another’s lives, and on the guilt Sharon felt for things left undone or unsaid.

“I don’t think I ever spent this much time before, re-drawing and drawing on top of already drawn birds, wanting them to move a spirit and free it of its bondage to Earth,” she explained. “The surface was a quality paper, one that allowed erasing and scratching through and into it. For months this crazy drawing kept me preoccupied.  Hundreds of birds became interwoven with her body.”

Finally came the title – Red Headed Witness – a reference to Nancy’s very full and very observant life, witnessing so much joy and sorrow, so much change and growth. Witnessing so much life, and so much art.  And, finally, witnessing the transition to what lies beyond. By wrapping the figure in birds, Kopriva is symbolically binding her up towards Heaven. “I was hoping to give her a little momentum,” she explained.

With this piece, Kopriva symbolically wraps the figure of Kienholz in white doves. The white dove has historically been associated with Aphrodite, the human soul and the Holy Spirit, to name a few. It is universally seen as a positive and hopeful symbol, a symbol of peace and tranquility. I believe Kopriva is offering that hope for tranquility and peace to her departed friend. It is a potent and personal painting. I am very proud that it will have its debut at the Ogden Museum of Southern Art.

Curator of the Collection
Ogden Museum of Southern Art