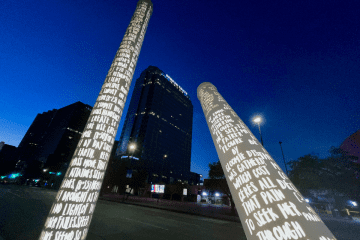 New Orleans, LA — Ogden Museum of Southern Art and New Orleans Museum of Art (NOMA) are pleased to announce a Panel Discussion featuring New Orleans-based multimedia artist Dawn DeDeaux, presented by The Helis Foundation. The discussion will be moderated by Bradley Sumrall, Curator of the Collection, Ogden Museum of Southern Art, and will also include Katie A. Pfohl, Curator of Modern and Contemporary Art, NOMA, and curator of The Space Between Worlds, DeDeaux’s first comprehensive museum exhibition now on view at NOMA. The three will explore DeDeaux’s newly installed work in the Poydras Corridor Sculpture Exhibition presented by The Helis Foundation, FREE FALL: Prophecy & Free Will in Milton’s Paradise Lost on Poydras, and will take place at Ogden Museum of Southern Art on Saturday, January 8 at 2 p.m.

“Using compositions of light and literature, this powerful sculptural installation engages the viewer to acknowledge their own agency and complicity in an impending loss of our Earthly Paradise,” explains Bradley Sumrall, Curator of the Collection, Ogden Museum of Southern Art. “With this work (much like her entire body of work) Dedeaux characteristically looks to the past to inform the future with her singular voice. It is a poetic alarm, an epic visual warning.”

DeDeaux’s FREE FALL: Prophecy & Free Will in Milton’s Paradise Lost on Poydras is a large-scale sculpture installation that pays tribute to John Milton’s 1667 ‘Paradise Lost.’ Selections from the epic poem appear on 64 concrete columns, installed at angles as though in a state of fall over several city blocks in front of the Caesar’s Superdome. The text is generated in highway reflective vinyl to offer distinctive appearances that vary from day to night: by day, the text reads in subtle pearlescence typography; and by night the verse transforms into a glowing vibrancy before the light of cellphones and headlights of passing cars – creating a moving, ever-changing choreography of light and language.

DeDeaux shares, “I am so pleased to illuminate Milton’s ‘Paradise Lost’ in highway reflective vinyl on columns that glows in the dark on Poydras Street before the Caesar’s Superdome.  Milton was blind when he wrote the poem, dictating the verses to his two suffering daughters! I was also influenced by Milton’s greatest aspiration to make our DARKNESS VISIBLE – which is the poem’s most famous word couplings. I wanted to give back to the blind poet and let him see his words in the darkness of night, and to share his poem’s sage relevance today, as we consider our own potential expulsion from Paradise. I personally now read the poem differently, and more a foreboding tale of our future rather than a myth of our past. This beautiful spinning Earth is our paradise and it needs our protection and respect.”

“I have linked the Milton’s Poydras Corridor Colonnade to the last art installation in my current retrospective at the New Orleans Museum of Art, The Space Between Worlds on view through January 23rd. Here I honor Milton with a 200 year old iron gate that is paired with the last verse of his poem describing Adam and Eve as they are expelled and depart Paradise through such a gate. I substitute Adam and Eve with my own self-portrait as a mere shadow, referencing our fragility and the ecological challenges of our time.”

This panel discussion will be free and open to the public, but advanced registration is required. All discussion attendees will receive one complimentary ticket to NOMA to see Dawn DeDeaux:The Space Between Worlds, on view through January 23, 2022. Attendees can register and to learn more by visiting www.ogdenmuseum.org.

New Orleans–based multimedia artist Dawn DeDeaux (American, b. 1952) has long worked between worlds. Since the 1970s, her art has addressed an ever-widening series of gulfs: between people, between cultures and communities, and ultimately between humans and the Earth itself. Living and working in Louisiana—one of the fastest disappearing landmasses in the world—DeDeaux has been grappling with urgent questions about Earth and humanity’s survival for the last fifty years. As we face a world increasingly imperiled by rising waters, roiling temperatures, unchecked pandemics, and escalating social strife, the future DeDeaux’s work has long foreseen is now.

For DeDeaux, physicist Stephen Hawking’s prediction in the early 2000s that humans have 100 years left—not to save the planet, but to figure out how to flee—sounded an alarm bell that humanity has a limited-time-only opportunity to come together and co-exist. Her art implores us to seize our last opportunity to heal past divisions, counter present inequality, and forestall future strife.

Looking back on five decades of work, Dawn DeDeaux: The Space Between Worlds resounds with a question that has animated DeDeaux’s entire career: If we are forced to escape—from flood, from fire, even from the Earth itself—who gets a seat on the bus? Who gets left behind?

About The Helis Foundation

Poydras Corridor Sculpture Exhibition presented by The Helis Foundation is the South’s leading rotating public sculpture exhibition. The Helis Foundation, Ogden Museum of Southern Art, and The City of New Orleans Department of Parks and Parkways work together to bring interesting and inspiring sculptures to the residents and visitors of New Orleans. Poydras Corridor Sculpture Exhibition has installed over 40 sculptures by artists of local and international acclaim on Poydras Street between Convention Center Boulevard and South Galvez. The Helis Foundation funds every aspect of the exhibition.

Bradley Sumrall is Curator of the Collection for Ogden Museum of Southern Art, where he is involved in building, researching and interpreting the nation’s most comprehensive collection of Art of the American South. A native of Mississippi, he currently lives in the Historic Tremé neighborhood of New Orleans. He has written extensively on the art and culture of the American South, and has served as curator for over seventy museum exhibitions. His shows have been reviewed in Art in America, Art Forum, Hyperallergic, Terremoto Magazine and Art & Antiques among other online and print publications.

About Katie. A. Prohl, Ph.D

Katie Pfohl is the Curator of Modern and Contemporary Art at the New Orleans Museum of Art. She completed her Ph.D. in American Art at Harvard University in 2014, and has a wide range of curatorial experience including positions at the Philadelphia Museum of Art, the Metropolitan Museum of Art, and the Museum of Fine Arts, Boston. In 2006, she completed the Whitney Independent Study Program in New York. Projects at NOMA include Mending the Sky, which featured eleven contemporary artists responding to a world in distress, Bodies of Knowledge, which invited local and international artists to reflect on questions surrounding cultural preservation and historical memory, Changing Course: Reflections on New Orleans Histories, which reflected on forgotten or marginalized histories of New Orleans, and Ear to the Ground: Earth and Element in Contemporary Art, which explored how nature can spur artistic innovation and spark new thinking about human culture and community. Current and upcoming projects include Dawn DeDeaux: The Space Between Worlds, a retrospective for New Orleans based artist Dawn DeDeaux, and a solo exhibition for the artist Ebony G. Patterson slated for Fall 2023.

About Ogden Museum of Southern Art

Located in the vibrant Warehouse Arts District of downtown New Orleans, Louisiana since 1999 and open to the public since 2003, Ogden Museum of Southern Art invites visitors to experience and learn about the artists and culture of the American South. Ogden Museum is home to a collection of more than four thousand works, making it the largest and most comprehensive repository dedicated to Southern art in the nation, with particular strength in the genres of Self-Taught art, Regionalism, photography, and contemporary art. The Museum is further recognized for its original exhibitions, public events and educational programs, which examine the development of visual art alongside Southern traditions of music, literature and local craft.

About NOMA and the Besthoff Sculpture Garden

​​The New Orleans Museum of Art, founded in 1910 by Isaac Delgado, houses more than 40,000 works of art encompassing 5,000 years of history. Works from the permanent collection, along with continuously changing special exhibitions, are on view in the museum’s 46 galleries Tuesday through Sunday, 10 am–5 pm. The adjoining Sydney and Walda Besthoff Sculpture Garden features more than 90 sculptures, including works from several 20th and 21st-century master sculptors. NOMA’s Besthoff Sculpture Garden is free and open to the public seven days a week, 10 am–5 pm. The New Orleans Museum of Art and the Besthoff Sculpture Garden are fully accessible to visitors with disabilities. Wheelchairs are available from the front desk. Museum admission is free on Wednesdays for Louisiana residents, courtesy of The Helis Foundation. Children 12 and under receive free admission. Teenagers (ages 13-19) receive free admission courtesy of The Helis Foundation.