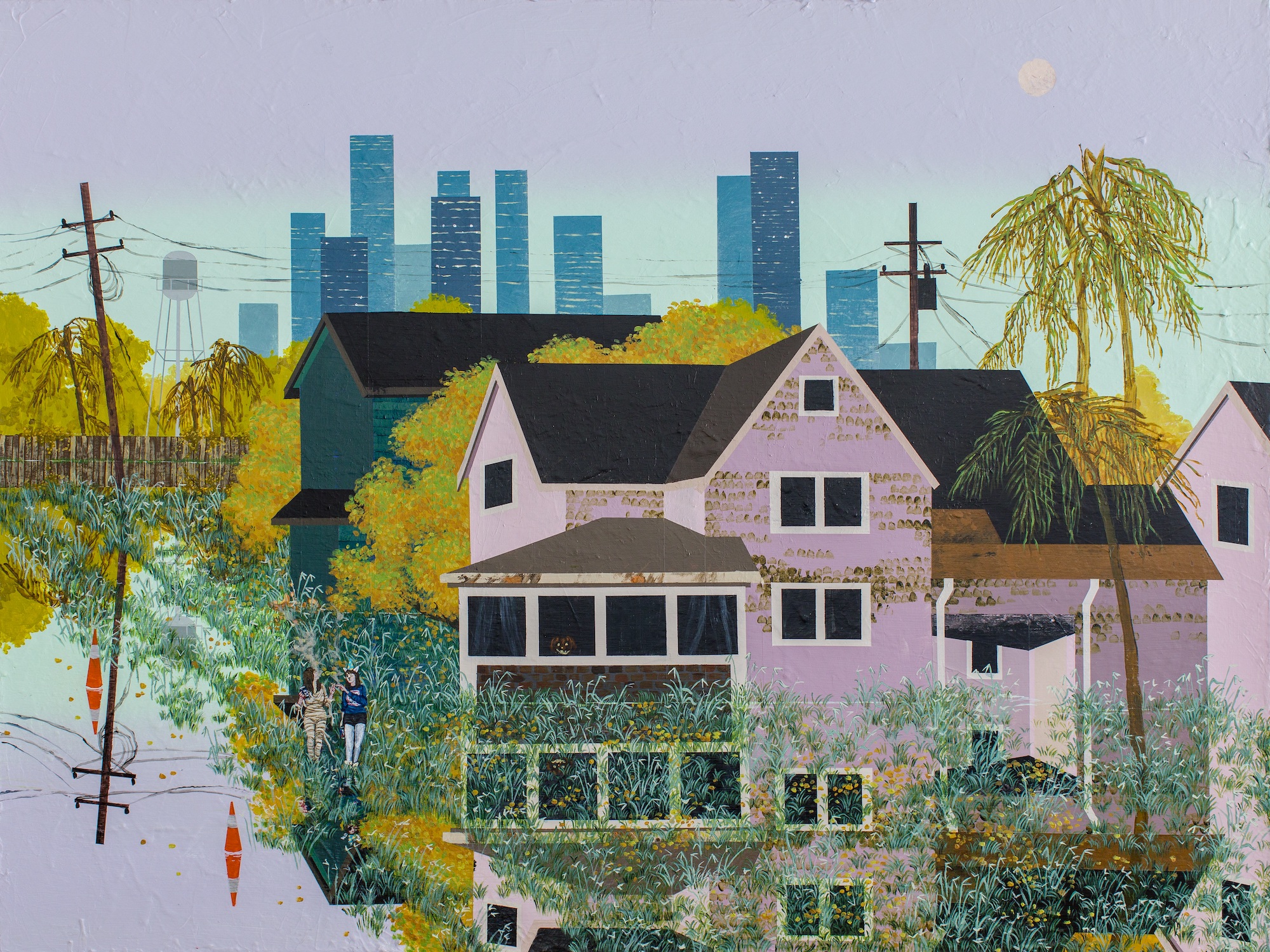 I first encountered Thomas Deaton’s work at the opening of the Louisiana Contemporary, Presented by The Helis Foundation, at Ogden Museum in 2019. The juror, David Breslin, had selected three of Thomas’s works for inclusion in the show. There were only about 50 works in total presented, so for a senior curator from the Whitney in New York to present multiple pieces from the same artist, was indicative of specific attention.

Initially, I intended to acquire one of the works from the exhibition, titled Dean’s Gun Range. The painting connected with me on multiple levels. I inquired with the artist about a potential sale and he invited me to his studio. Deaton had been working on something new, Halloween 3, which I immediately gravitated to and eventually purchased.

Halloween 3 demonstrates the best technical and creative elements of Deaton’s work. There is exacting precision in its rendering, atmospheric freedom in its palette and mystique in its characters and setting. In speaking with the artist, I learned about the essence for his fondness of incorporating water and its capacity to reflect mirror imagery; his conjuring of imagined spaces from a variety of observed locations; his consideration of personality and character in surreal settings.

Halloween 3 demonstrates all of these critical component in beautiful detail.

The work poignantly encapsulates my experience in New Orleans. The sky with its fading moon and pastel blue dawn breaking over an austere and minimal cityscape plays brilliantly over the flooded residential foreground. The architectural forms of the pink house in the foreground and its mysterious blackened windows, interrupted by a singular jack-o-lantern, resonate my memories of homes in my native upstate New York. In fact, I learned from the artist that he first observed and photographed this particular house in Maine, including it in this painting for its pronounced angularity.

The severe lines, angles and perspective throughout the Halloween 3 are balanced with soft shading, gentle light and bending vegetation. This combination of forms imparts an uncanny and sublime affect to the painting as a whole.

The two characters in the fading foreground are perhaps the least emphasized but also the most acute aspects of the work. With the jack-o-lantern in the darkened window, they are the only details that allude to the title of the piece. These two pilgrims, sharing a mysterious odyssey in the early hours, offer an anecdotal entry to the expansive landscape and offer the viewer a participatory moment therein.

In its entirety, Halloween 3 is an exceptional work. For me, it is encapsulates my impression of, and affection for New Orleans while simultaneously conveying a sense of mystery and beauty that resonates across many cities and experiences.

The call for entries is open for the 2020 exhibition, Louisiana Contemporary, Presented by The Helis Foundation.