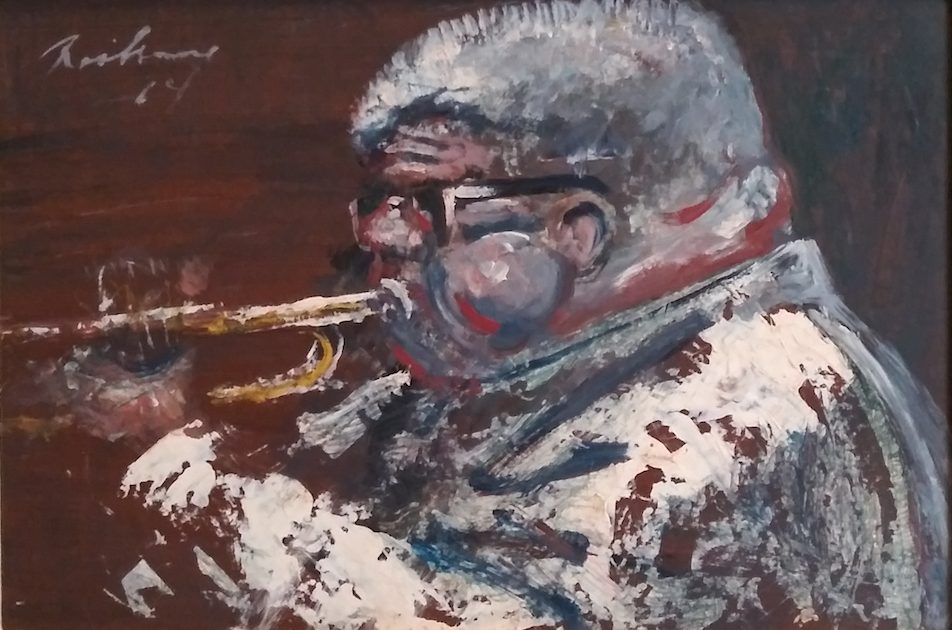 If you’ve spent any amount of time, as I have, in conversation with the old-line bohemians of the French Quarter, you’ve heard many tales of the late Noel Rockmore. He was a regular patron of the lower-Quarter artist cafes and bars central to that social scene, and he held court with no less intrigue and charisma than his fellow bohemian, Tennessee Williams. Arriving in “the last frontier of Bohemia” in 1959, Rockmore discovered the place of his dreams; a place that allowed him to both portray the fantasy and decay so central to his personal aesthetic, and to do so by painting what was there, without embellishment.

Born in New York City in 1928, he had both lived in France and studied violin by the age of five. He and his sister, Deborah, studied briefly at Julliard. By 1939, painting and art had become his passion. By 16, he was emulating the work of Rembrandt at the Metropolitan Museum. By 18, he was studying at the Art Students League.

In 1948, Joseph Hirshhorn purchased Rockmore’s Self-Portrait with a Model. At the same time, his style was being defined through a series of seventy-five drawings of Bowery bums. He depicted these crushing figures without social comment; a style he continued throughout his career. He spent time in the Natural History Museum painting monkeys and mummies. Several years were spent depicting Coney Island through drawings, etchings and paintings.

Throughout the fifties, his work matured and continued to meet growing critical success. The Whitney Museum exhibited his work in 1956. In 1958, Hirshhorn bought nine more paintings, all of which are now in the Hirshhorn Museum in Washington, D.C.

A friend recommended that Rockmore visit New Orleans in 1959, and arranged a studio for him in the home of Paul Ninas. By 1963, Rockmore had executed over 350 portraits of musicians at Preservation Hall. Ben Jaffe, bassist, creative director and proprietor heir of Preservation Hall, told me that his father would often purchase the portraits painted in Preservation Hall. It was a kind of steady income for Rockmore during his early years in New Orleans.

This painting is from that series, and depicts Percy Humphrey playing his trumpet at the Hall in 1964. Percy and his brother, clarinetist Willie Humphrey, were legendary Jazz musicians whose careers spanned over seven decades. Over the course of his life, Percy played with some of the greatest jazz musicians of the time such as Kid Howard, Bessie Smith, George Lewis, Sweet Emma Barrett, Kid Sheik, Peter Bocage, Chicken Henry, Wilbert Tillman, Big Jim Robinson and many others. He began playing at Preservation Hall when they opened in 1961, and continued well into the 1990s. He began playing with the Eureka Brass Band in the 1920s, and served as the last leader of that legendary band. His final performance was at the New Orleans Jazz and Heritage Festival in 1995, just months before he passed.

I love this painting for its history, but also its mastery. It is some of the finest knife painting I have seen, accomplishing so much light and energy with such minimal strokes. Living with this little piece of history keeps me tied to this place, and reminds me daily of the rich cultural legacy of my neighborhood.

– Bradley Sumrall, Curator of the Collection