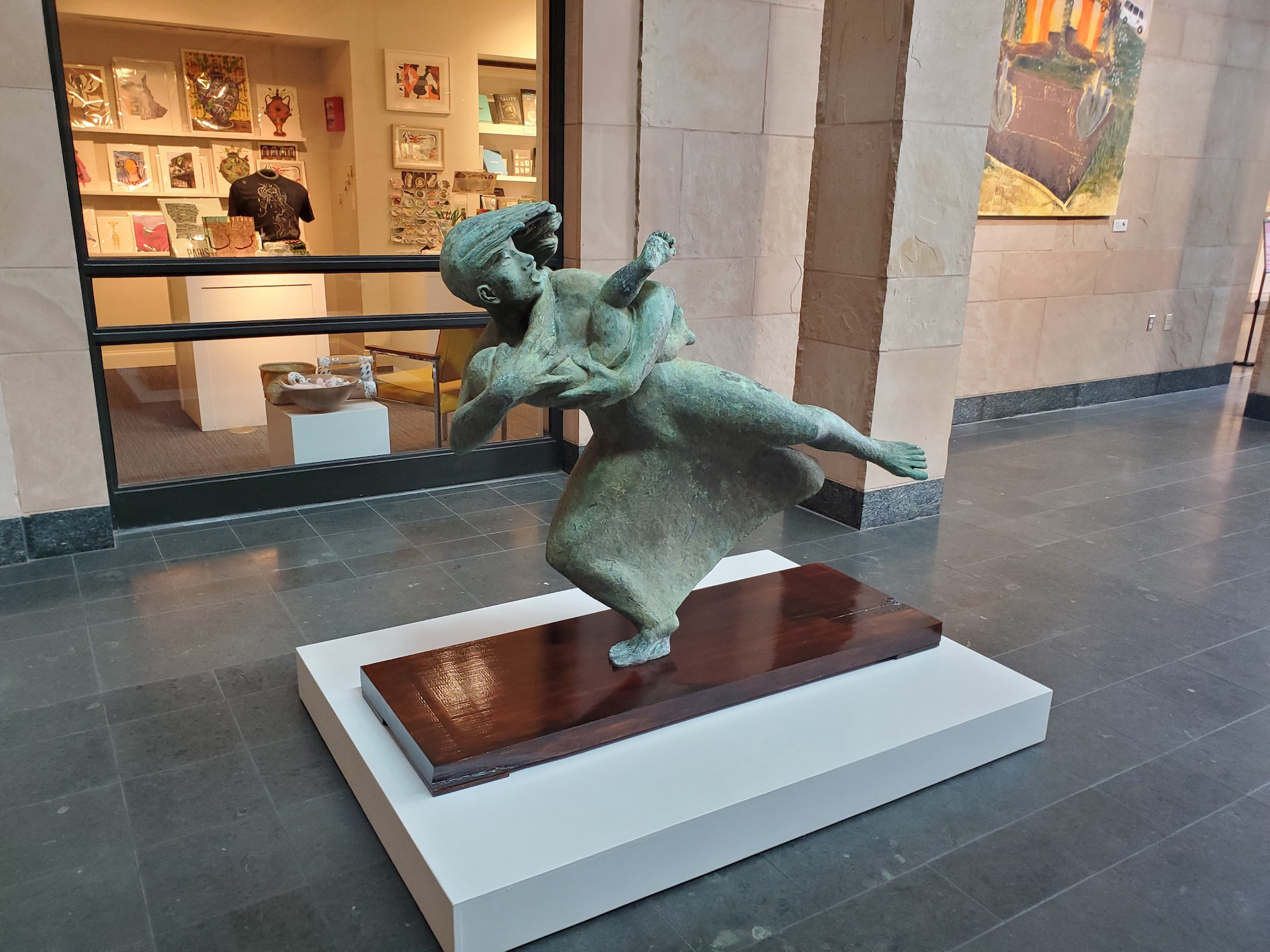 Born in the State of Zacatecas, Mexico in 1901, Enrique Alférez’s life spanned almost the entirety of the 20th century. Alférez settled in New Orleans in 1929, and in 1952 at Lafitte’s Blacksmith Shop, he met his wife, Peggy Selway, a nurse from Harrisburg, PA. The couple split their time between Mexico and New Orleans. In Peggy, Enrique found an intellectual equal described as the artist’s “other self.”

Both Enrique and Peggy were firmly against the Vietnam War, and their passionate protest is conveyed in this sculpture, La Vietnamita – Mother in Flight, now on view at Ogden Museum thanks to the generosity of Geneva and David Kerstein, The Helis Foundation and Roger Houston Ogden. 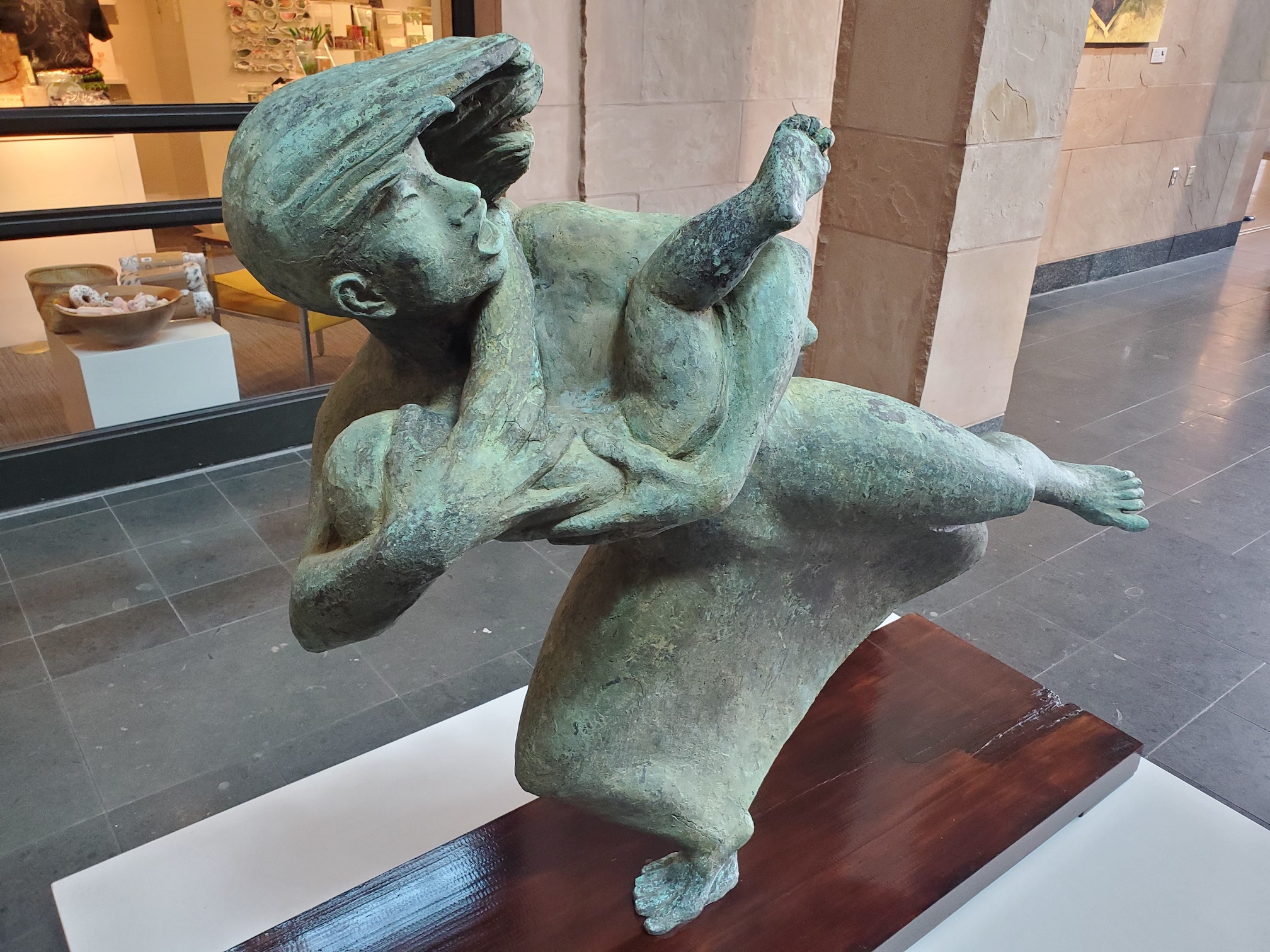 The woman, a mother, is caught mid-stride carrying her baby to safety from unseen foes as she flees. The kinetic frenzy of the wind and war-ravaged backdrop is implied through the expression on her face, the baby’s legs akimbo in her embrace, and the flowing rendering of her hair and clothing. In focusing on the mother and child, the horrors and destruction of war are implied, albeit rather poetically, through Alferez’s elegant style. The resulting effect is a sensitive and moving masterpiece, replete with beauty and meaning. [1]

In 2012, Ogden Museum exhibited, The Created World of Enrique Alférez. In describing the exhibition, Bradley Sumrall, Curator of the Collection, wrote, “Easily recognizable for its simple elegant lines, excellent craftsmanship, and iconic imagery, the work of Enrique Alférez has become an integral part of the visual landscape of the South – New Orleans, in particular. Alférez was a driven artist, dedicated to the democratic ideal of public art, and unflinching in his vision of the world he created.”

La Vietnamita – Mother in Flight can be viewed on the first floor of Ogden Museum. 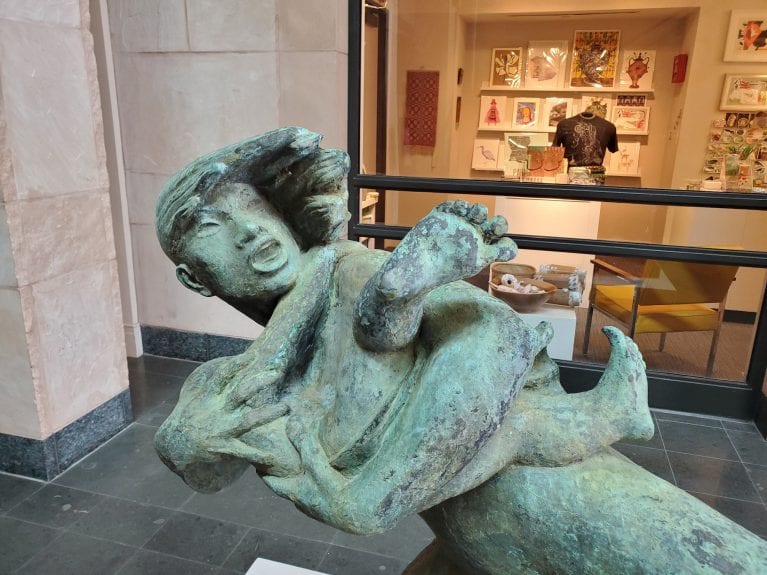 Born in 1901 in the State of Zacatecas, Mexico, Alférez was the son of an artist trained in Europe, who sculpted religious figures in Northern Mexico. At the age of 12, Alférez ran away from home. Finding himself behind the lines of the Mexican Revolution, he was forced into the ranks of Pancho Villa’s army as a map-maker. At the end of the Revolution, Alférez crossed into the United States at El Paso, Texas, where he worked for a photographer. Inspired by a lecture given by Larado Taft, he followed the sculptor to Chicago, where he studied at the Art Institute of Chicago from 1924 to 1927, and trained in Taft’s studio. Working in the dominant Art Deco style, Alférez completed his first public works while living in Chicago, including twenty-four wood relief panels for the Palmolive Building.

Arriving in New Orleans in 1929, Alférez was commissioned to execute figures for the façade of the new Church of the Holy Name of Mary. It was the beginning of a career in this city that would last for seven decades, and produce more public works than any other artist in his adopted city. During the 1930s, he directed sculpture projects for the Works Progress Administration, and taught for the legendary Arts and Crafts Club in the Vieux Carré. His Fountain of the Four Winds, created at the New Orleans Lakefront Airport caused quite a bit of controversy in 1937 when he was asked to chisel off the male genitalia. Refusing to do so, Alférez guarded the sculpture against destruction with a rifle, until the First Lady, Eleanor Roosevelt, intervened on his behalf.

During World War II, Alférez tried to enlist in the U.S. Marines, but was declined. To help further his cause, he executed Molly Marine, the first public sculpture depicting a female service member in uniform. The first version was destroyed by vandals in his studio. The final version, dedicated November 10, 1943, and made from granite and marble chips, still stands at the corner of Elk and Canal streets in New Orleans. Despite being turned down by the Marines, he served briefly in the Mexican Army as captain, and then in the U.S. Army Transportation Service. He was later made Honorary Leatherneck by the U.S. Marine Corps for his service.

After the war, he spent a brief time in New York City, working in fashion and furniture design. Returning to New Orleans, he married Peggy Selway in 1953. She would be a major advocate of the work of Alférez for the rest of her life. Their daughter, Tlaloc, continues to champion the work of her father.

In the 1980s, the family bought an old church in Uptown New Orleans, and converted it into both a home and a studio complete with exhibition space. From that studio, Alférez completed many more public works in New Orleans. Much of Enrique Alférez’s work can be seen, thanks to the generosity of The Helis Foundation, in the 8,000 square foot Enrique Alférez Scupture Garden in New Orleans City Park’s Botanical Garden.

When Enrique Alférez died in 1999, he left behind a legacy of work, both public and private, that stands as testament to a life dedicated to art. He is survived by his daughters, Dr. Tlaloc Alférez and Mrs. Robert Roesler (Chloe), three grandchildren and three great-grandchildren.