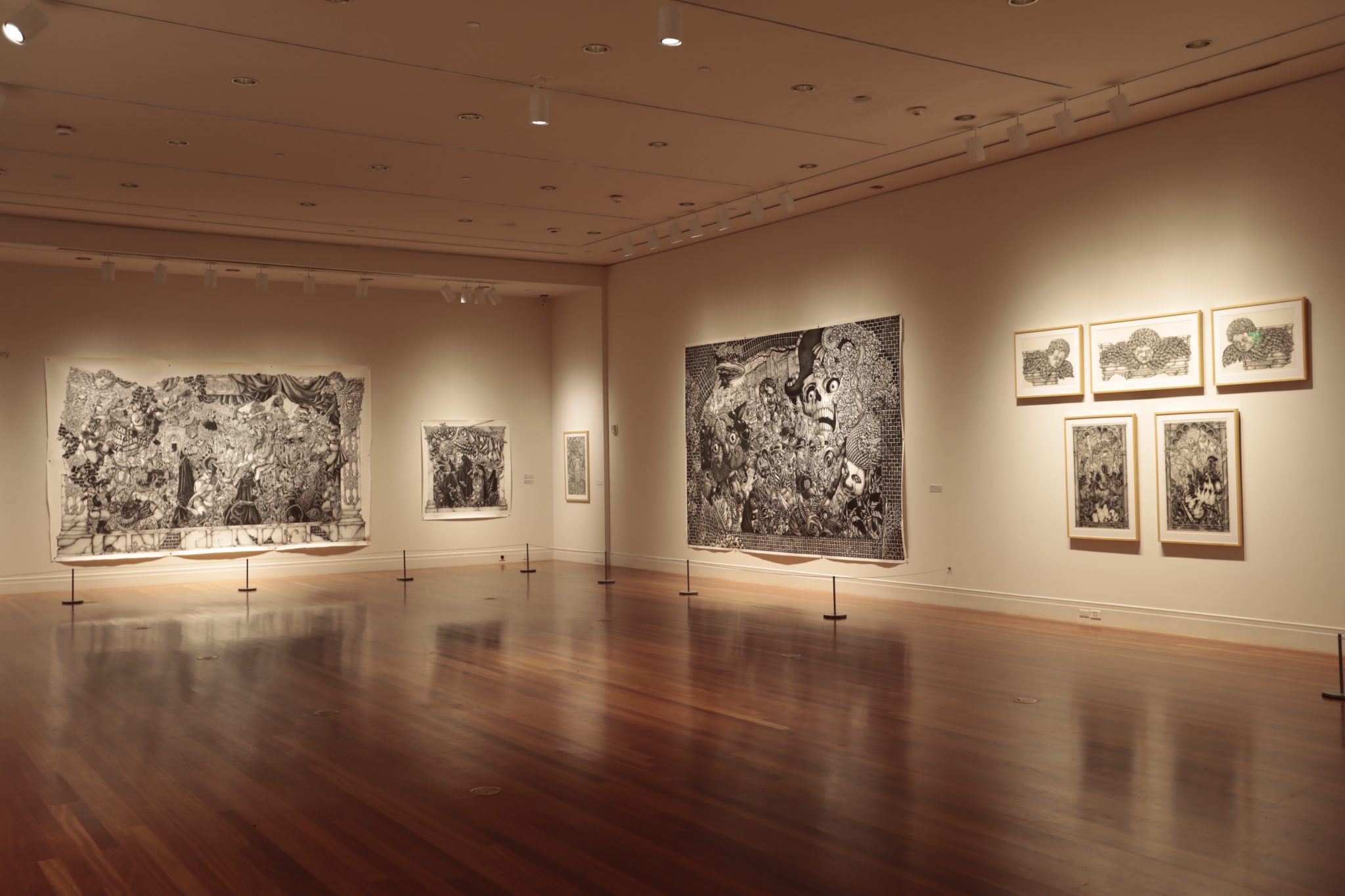 Michael Meads: Bent, Not Broken at the Ogden Museum of Southern Art, 2015

The spirit that lies in the work of Michael Meads is whimsical yet foreboding.  His graphite drawings, like the-larger-than-life “Der Liebestod’ or “Ghosts Along the Levee,” are a gluttony of New Orleans mayhem – you get lost in the detailed magistery of his scenes depicting debauchery, tragedy and chaos.  His early works consisted of photographic documentation of his friends and their lives in rural Alabama, and drawings and paintings based off of their experiences.  There is no doubt that his style blossomed once he came to New Orleans – observing and fantasizing in the midst of the condensed excitement of the French Quarter.  Yet, even in his earliest works there exists the voice of a spirit that moves in complicated and inexplicably simple ways. 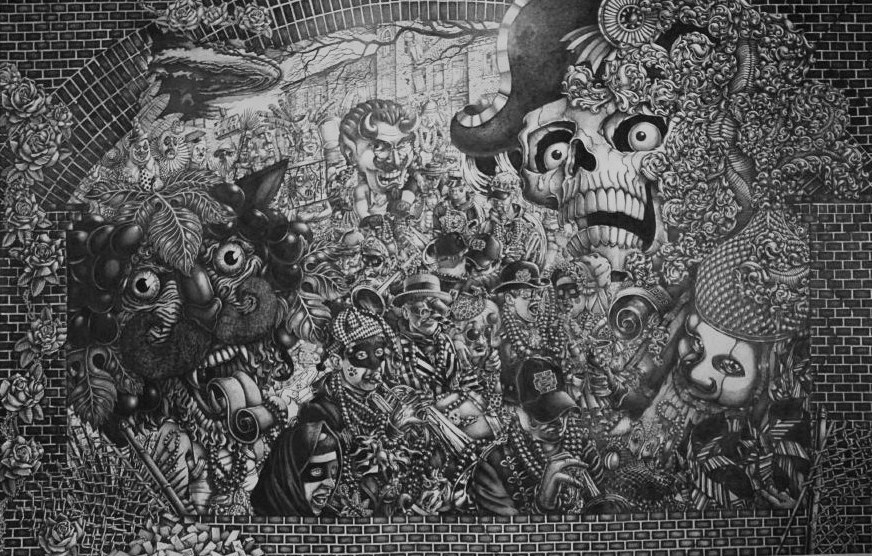 Ghosts Along the Levee: The Seniors’ Mardi Gras Parade at Holy Cross High School for Boys, 2012-2013, graphite and charcoal on acid-free paper, 120 x 168 inches, Collection of the artist (Not in the permanent collection; featured in 2015 Ogden Museum exhibition) 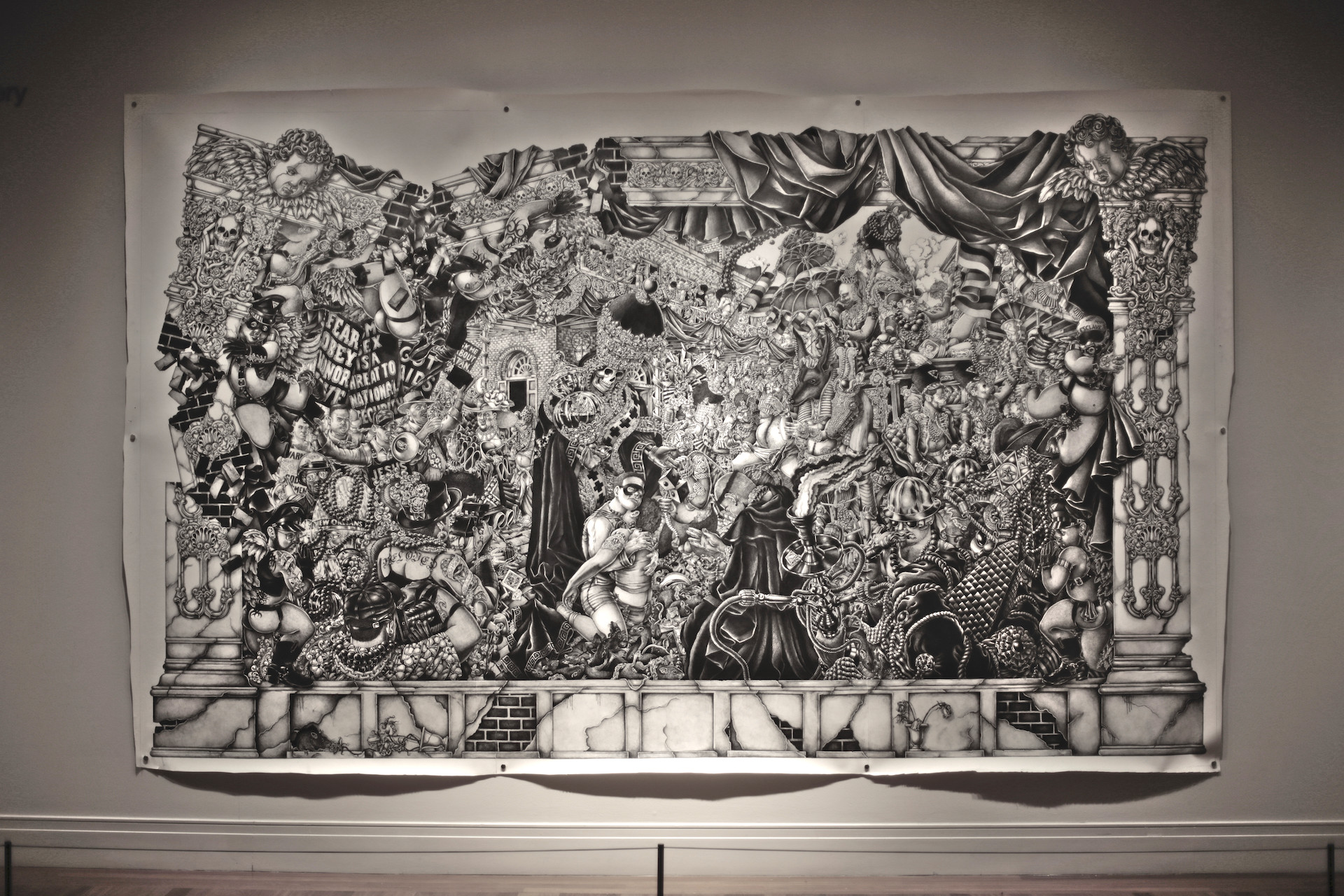 Der Liebestod, 2013-2104, graphite and charcoal on acid-free paper, 108 x168 inches, Collection of the artist  (Not in the permanent collection; featured in 2015 Ogden Museum exhibition)

One particular piece is a chronological record of a melancholy and sadly reminiscent time. Before he moved to the city of New Orleans and after graduating with an M.F.A. from the State University of New York at Albany in 1990, Meads moved back to the rural region of Eastaboga, Alabama. It was during this time, in the early 1990s, when friend Colman (and occasional model for his photography) requested that Meads document the process of going through prostate cancer treatments and his death to follow. Meads kept that promise to Colman, who was 19-years-old at the time, and records this difficult process of transitioning from a rather normal youth to slowly leaving life and the people in it. His choice of medium, sumi ink, is often used in Japanese portraiture to capture the spirit of a scene, rather than rendering all things exactly as they appear. The last two drawings of the series, Keeping My Promise, and The Vigil Ends portray the spirit of this solemn scene drastically through their similarity in appearance yet with a contrast of lightness that surrounds Colman in the final image, while friends gather to say their goodbyes.

It is hard to forget the characters and fantastical scenes that Meads presents in elegant detail. There is an unmistakable style in which he animates the sadness, cruelty and ugliness of life, but in a methodical and meticulous way. Not all in his collection evoke this idea to the same extent but one thread does persist in the work of Michael Meads – an actively searching spirit.