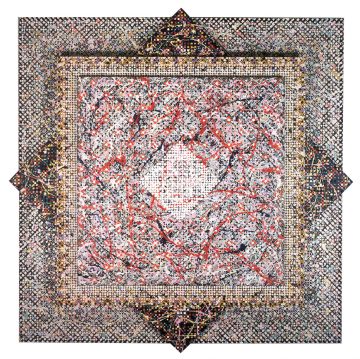 In honor of Veterans Day, we are highlighting the work of World War II veteran, Kendall Shaw!

Shaw was born in New Orleans in 1924. He served in the U. S. Navy as a radioman on an SPB Dauntless dive-bomber searching for German submarines off the mid-Atlantic coast during the second world war. The experience he gained during his service to country at a time of war informed his work for the rest of his life.

Shaw studied painting in New Orleans with George Rickey, Ida Kohlmeyer and Mark Rothko. In New York he studied with Ralston Crawford, Stuart Davis and O. Louis Guglielmi. He held faculty teaching positions at Columbia University Architecture School, Hunter College, Lehman College, The Brooklyn Museum School and Parsons School of Design. Shaw was one of the founding members of a group of artists that came to be called the Pattern and Decoration Movement in the 1970s for their use of repeating geometric patterns inspired by craft traditions from both Western and non-Western cultures.

Born in the final years of the Greatest Generation, Shaw devoted his life to art after his formative experience of military service during WWII. Kendall Shaw died peacefully in his home in Brooklyn, New York on October 18, 2019. He leaves a legacy of innovation and excellence in American Art, and remains one of the most important artists to the mission, history and trajectory of the Ogden Museum of Southern Art.