Alanni: What motivated you to become an artist?

Kyle: Motivations to become an artist, at least for me, are unknown. I have no idea. As an artist, you don’t just stumble into it, you’ve kind of just been doing it for forever. I would love to believe [that] it had something to do with my mother and my father. They came from the Caribbean, from Trinidad Tobago where it’s just like in New Orleans, carnival season is a big deal. With carnival seasons comes the aesthetic, the colors, the vibrant scenes. I do remember my earliest days in the arts were creating costumes for these activities. I want to say that’s where that started with the arts.

“…I saw that you can be successful regardless of what field you get into. As long as you have that internal desire to do so, you can do it.” – Kyle Salandy

Alanni: Did you face any challenges in your pursuit of becoming an artist?

Kyle: Yeah, absolutely. Going back to the whole immigrant parents thing, I’m first generation American. My parents came to America, and with most immigrants they don’t expect to raise student artists. They expect to raise an engineer or a doctor or a lawyer. So to let them know, yes, I am college bound, but I am college bound in the arts, it was a little bit of a hindrance. For my mother, at least, things were tough there. She wasn’t as proactive and open. I want to be in the arts, that’s a struggling man’s profession. “Don’t go that way, be a teacher” or something like that. So that was probably my biggest obstacle in regards to pursuing the arts, the peculiar support. My dad died when I was 18, so with him being a musician and my mom being a teacher, she really wasn’t as supportive. That played a role internally for me, I’m repeating this mantra that she has, that it’s not possible to make the arts a career, a profitable career. I spent some time pursuing other career fields- I was in personal banking, private banking for six years. After doing that and being in the quote, corporate world, I saw that you can be successful regardless of what field you get into. As long as you have that internal desire to do so, you can do it. So I was like, you know what, let me take a step back from this whole banking thing. It’s boring. Let me pursue something that I really want. We only got 85 years on this planet so might as well make the best of it. 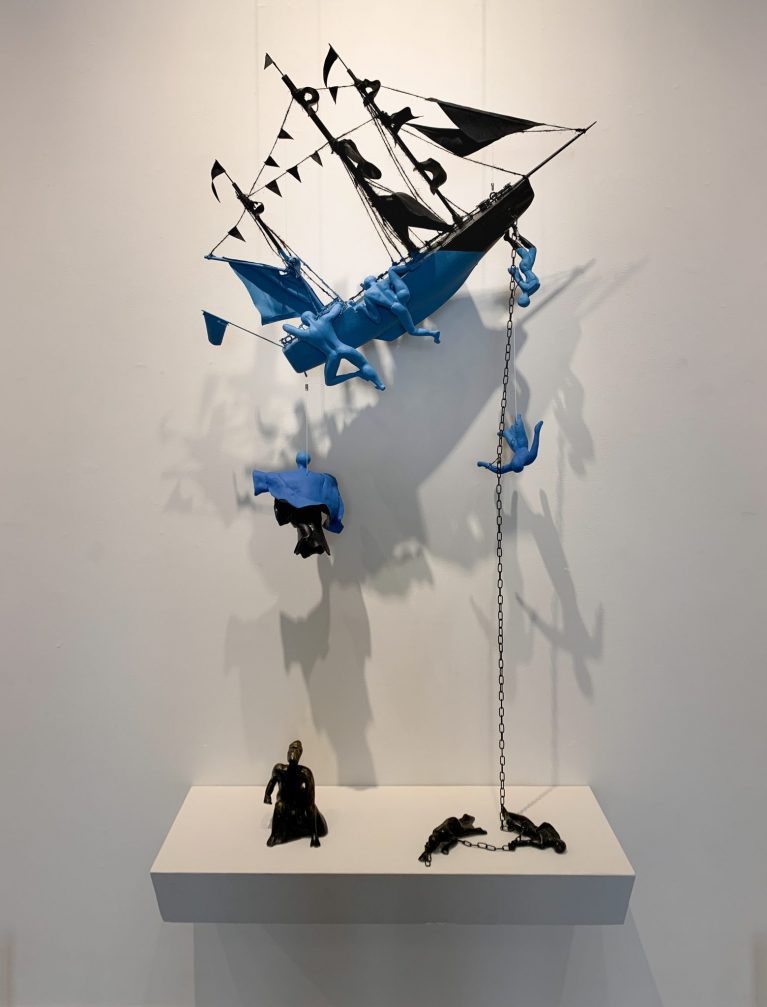 “Why can’t the Black American be allowed to progress and excel the way that other Black nations have been able to do?” – Kyle Salandy

Alanni: What inspired you to create CAPSIZE?

Kyle: I’m an angry Black man. Not really, but I’ve been angry. The past few years have really affected me internally. Once again, my family’s from the Caribbean, our history, the Caribbean history and the Afro-Caribbean history and the Afro-American history, even though it has many of the same foundations (fundamentally the same) but there was a point in history where things switched and benefited the Caribbean person more so than it did the American Black [person]. We were emancipated in the 1830s and had from the 1830s onwards self governing Caribbean nations. Yes, they had some European influence, but for the majority we were run by the ancestors of these enslaved people, Black people. So the idea of racism really wasn’t taught to me from my immigrant parents, because it’s not something that they understood well. To be first generation, I’m Black in America with Caribbean ancestry. These situations like the history of lynching, the culture of lynching, the culture of oppressing the Black person, oppressing minorities, marginalized people, gay, straight, or whatever. It’s not something that my parents have prepared me for because it’s not something they understood at all either. I’ve just developed this anger because it’s far-fetched to me, it’s weird to me. Why must this have happened to people when elsewhere in the world Caribbean nations are completely self-governing and doing well for themselves? Why can’t the Black American be allowed, for lack of a better term, why can’t the black American be allowed to progress and excel the way that other Black nations have been able to do? It was just anger. With CAPSIZE it was telling the story of the transatlantic slave trade, of the African slaves coming over. Some of them not giving up, but just realizing the predicament that they were in. That if we’re being taken away from our country by this great expanse of water, the likelihood of my child, or my grandchildren getting back to what we know is unlikely. This is probably going to be a generational thing. So they said, “We’re not going to subject our people to that.” and jumped. That was also about the Black woman. I don’t feel like the Black woman gets enough credit on the progression of the Black American or the African Indian Americans. I don’t feel like the Black woman gets enough credit. Like the Angela Davis’ of the world and the other big names, they get credit, but the mom, the aunt, the unspoken Black woman, doesn’t get enough credit for what she has done, what she has contributed to the progression of Black people. If it wasn’t for her. I mean, the political system has our fathers locked up, the Black man is supposed to be in jail. The Black woman is at home bearing the children. She’s doing a lot of the work with no real credit for what she does.

Alanni: Why did you choose this medium for CAPSIZE?

Kyle: It was for a school project. It was a found object project in a sculpture class. We were supposed to find something in the world and make art from that as the foundation. The base of the boat, the bottom half of the boat, was the best $2 I ever spent at Goodwill on Tulane [Ave]. Shameless advertisement. But yeah there’s this little boat. It was supposed to be like an old guy’s hobby or whatever. I was like I’m going to turn this into a slave ship. Let’s make this critical, I’m gonna turn it into a slave ship. So I built upon it, built the rigging, the sails, and that’s where it started from. I knew once I saw it at Goodwill, I was like, this is going to be my slave ship. I’m going to turn this into a slave ship as a metaphor for the systems that brought us over. The marginalized, the socio-economic systems, the racist systems that brought us from Africa to the new world, wherever they can go, from Argentina all the way up to Canada. I’m going to make it so that it’s showing our story; the past 500 years of depression, what’s happening now, today. We were brought over 500 years ago on these ships. Now with the political turmoil that’s going on in the country, this cultural revolution, you know, Black Lives Matter or the #MeToo [movement], or whatnot, with capsizing the same systems that brought us in for the first time and half of millennia. We have the backing outside of just Black people to say, “This is wrong. It should not be this way.” Only in the past 50, 60, 70 years maybe have we had people outside of the Black spectrum saying, or supporting us. Now we have white people saying this is wrong. Now everything’s televised. We have people across the world saying, “Wait, why are these Black Americans going through this? That’s wrong.” We’re capsizing the systems. That’s where I came up with the term capsized.

Alanni: CAPSIZE made me feel very somber. It has that effect. Was this your intention in creating this work?

Kyle: Unfortunately, yes. I’m sad that you had to experience that sadness, but that was the point. That’s what helped me develop art. It’s what helped me dig in and research a little bit more because I didn’t have that anger growing up. Once again, my immigrant parents didn’t instill the thought of racism [in me]. I always thought, everybody no matter what your color is, everybody’s happy, everybody’s good. You know, we cohabitate, be friendly, do unto others as whatever. So I’m growing up ignorant to the American racism. I felt like being angry, watching these slave documentaries, or watching these Jim Crow things or movies or whatever instilled that anger. That anger allowed me to expand [my work]. It allowed me to absorb a little bit more. I mean, it masks ignorance and I felt that was beneficial for me.

Alanni: Is there a specific audience that you hope to reach with your work?

Kyle: Everybody, honestly. The more ignorant the better, the more racist, the better. I want everybody to recognize the story because I feel like that’s the issue, that people don’t know the whole story. Just like with me, I didn’t know the whole story growing up. So there’s this level of ignorance. I’m not going to say white people, people of less color or whatnot, but they don’t know the whole story. They see what they see on TV. They see there’s shooting in New Orleans East. “Oh, I’m associating New Orleans East with Black people.” Therefore crime is synonymous with Black people. Well, why is that the case? Why is the crime associated with Black people? Well, because of the socioeconomic disparities, because fathers are in jail, so now you have a single mother household. She has to work three jobs, so [that] she can keep her kids in line, or whatever the story may be. So I want the ignorant person [to be the audience]. Not to say ignorance is bad. Ignorance allows people the chance to absorb more than, say, a non ignorant person. Everybody that doesn’t know needs to know.

Alanni: What is the legacy that you would like to leave behind through your work?

Kyle: I mean I would love for me never to have to make work like this again. I would love for this anger art to stop. If people get their stuff together and people have the discussions and people have the talks, people are just more prone to be a little bit more sympathetic or empathetic, and I wouldn’t have to make this work anymore. Ultimately the goal is to not have to make this stuff. I would love to make art with smiling faces and hearts and rainbows and stuff like that. But at this point in time, my job is to storytell and artists as storytellers. My job is to allow people the opportunity to dig deeper into this human experience. I don’t care much about leaving a legacy, not too much.

I would love to make happier artwork. I would love to. [The artwork] wouldn’t have placed such a toll on me. Each one of these sculptures, I’m under this sculpture for a month at a time. It’s all day, every day. I’m staring at this reminder of why I’m making this work. It doesn’t feel good. It doesn’t feel good at all to feel like I have to take on that burden. I would love to make happier stuff. I’m an optimist, but I’m also a realist. Realistically speaking things aren’t where they need to be. Things have definitely progressed. 30 years ago, things were not easy. 50 years ago, things were even worse. I’m an intern at the New Orleans Museum of Art, as of 1968, my Black behind couldn’t have gone there. So things have definitely progressed, and hopefully it’s going to get to a great standing in my lifetime, but I mean, we’ll see.