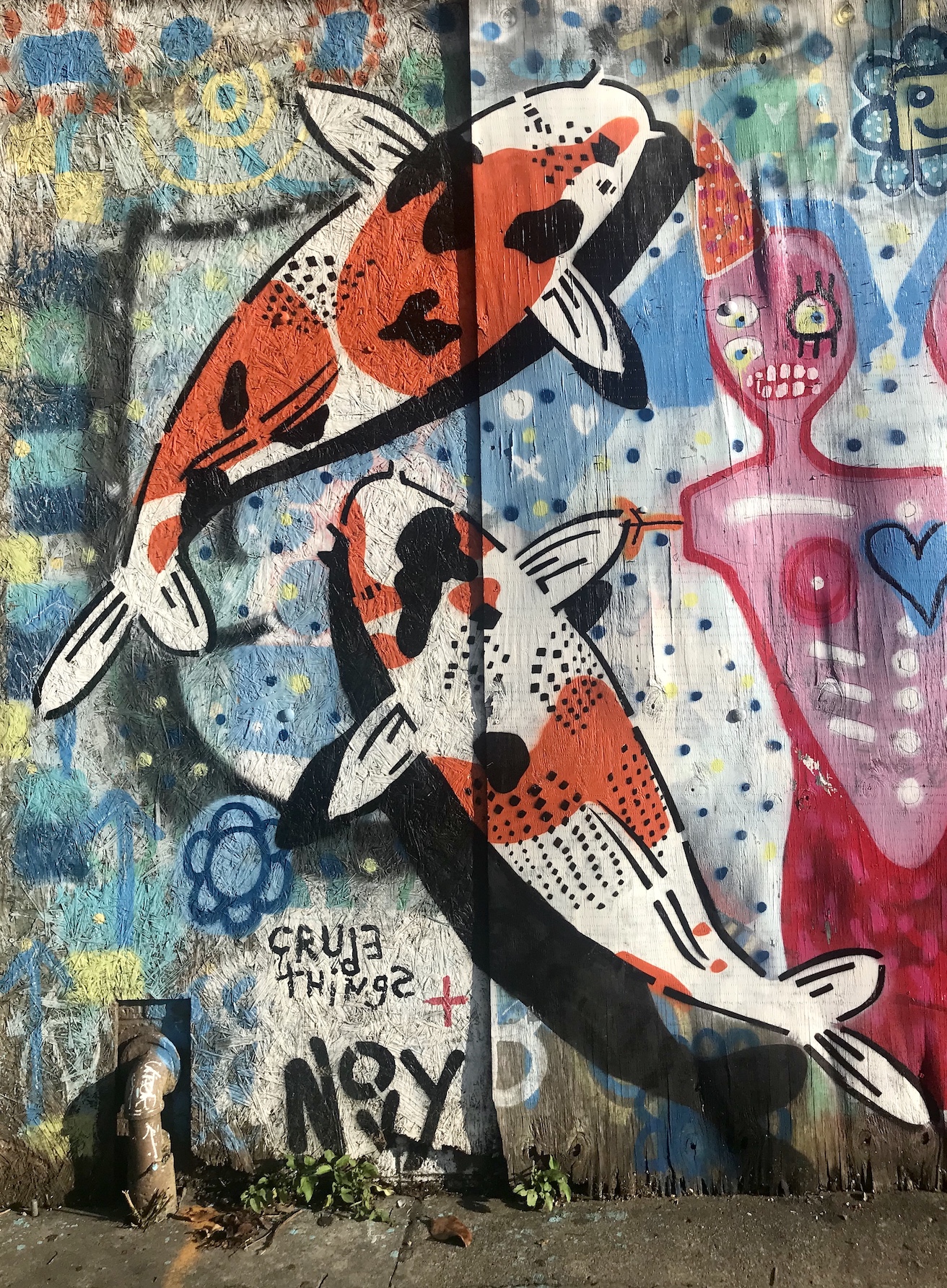 Perhaps you have been walking down a street in New Orleans and seen a group of koi fish painted on the sidewalk. Perhaps they were under water in a puddle. Perhaps it was not New Orleans, but San Francisco or New York City. Did you wonder “who painted those?’ or “what does that mean?” The artist behind these seemingly simple images is Jeremy Novy, and the story behind the koi is deeper than you may think. Jeremy Novy is a contemporary artist currently based in San Francisco whose practice is firmly rooted in Street Art traditions. He earned a degree in graphic design from Gateway Technical College in Elkhorn, Wisconsin in 2004, and a B.F.A. from the Peck School of the Arts at University of Wisconsin in 2008. It was in the train yards of Milwaukee that Novy produced some of his earliest street art, mainly stickers or “slap ups.” In 2006, he travelled to China for a three month program studying Ancient and Contemporary Chinese Art. He became fascinated with Chinese scrolls and propaganda posters.

Having a background in graphic art, Novy was already familiar with the power that branding and subliminal imagery has to persuade popular opinion. After visiting a small museum of Communist Party propaganda art in Shanghai, he was faced with the full power that graphic art has to persuade people to think and feel a certain way. By placing these images in public places as stencil art or wheat paste posters, and by reducing text to a minimum to avoid language barriers, the Communist Party could shape the opinions of millions of citizens. Novy realized that was what he wanted to do with his art practice: affect change on popular thought through his images.

The study of Chinese scrolls opened up a wealth of symbols and ideas for Novy, not the least of which is his koi fish. During the Cultural Revolution, the Communist Party (especially the Red Guard) called for the destruction of “the Four Olds”; meaning old customs, culture, habits and ideas. Buddhism and “Lucky Numbers” were among those old ideas that became hidden or discouraged in Chinese culture. In scrolls, the koi were often used as graphic replacements for the lucky numbers. The number of koi depicted would signify a certain meaning related to the meaning once communicated through numbers. Koi are also respected in Chinese culture for their beauty, strong life force and their ability to swim against the current. They can be seen as symbols of good fortune, prosperity, strength, ambition or perseverance.

Returning to the U.S., Novy began to use stencils as his primary medium. With his koi, he is honoring the traditions of Chinese art, commenting on the ways that images affect popular opinion and exploring the tension between the old and the new. His schools of koi also brighten the dirty grey sidewalks of American cities with colorful symbols of good fortune and strength. But the koi are only one symbol in his lexicon, which includes a variety of birds, words and queer culture imagery.

Jeremy Novy believes that art should be political and that it should deliver a message. He has chosen the street as his canvas because he believes in the democratization of art, making it accessible to all people. A pioneer of Queer Street Art, Novy seeks to affect social change through representation, bringing queer imagery (drag queens, bear traps, rainbows, care bears) to the streets through his stencil art and wheat paste posters. The streets belong to everyone, and he feels everyone should be represented and feel accepted.

SOCIAL MEDIA CHALLENGE (THROUGH JUNE 24)
Jeremy Novy’s koi fish can be found on the sidewalks all around New Orleans. We encourage you to go out and snap a photo of some of your favorites; in you neighborhood or outside local businesses! Tag the Ogden Museum of Southern Art on your Instagram post or email your picture to development@ogdenmuseum.org for a chance to win a Dual Membership to Ogden Museum or a Museum Store Grab Bag, full of some of our favorite items from the Ogden Museum Store. Enjoy the beautiful weather and happy fishing!

Bonus Challenge: Read the following clues to find 2 of Novy’s other pieces in New Orleans. Tag a picture of both on Instagram or email them to us for another chance to win one of our fantastic prizes!

1. In honor of Pride Month, this colorful symbol of LGBTQ pride lies waiting to welcome people across this major Marigny thoroughfare.

2. One wall of a legendary neighborhood bar is transformed by the flight of these beloved green and blue transplants.

Jeremy Novy is a contemporary artist, currently based in San Francisco, whose practice is firmly rooted in street art traditions and uses stencils as his primary medium. You may recognize the koi fish that Novy has painted on sidewalks and buildings around New Orleans. With his koi, he is honoring the traditions of Chinese art, commenting on the ways that images affect popular opinion, and exploring the tension between the old and the new. His schools of koi also brighten the dirty grey sidewalks of American cities with colorful symbols of good fortune and strength. Join us for a live art challenge led by Jeremy Novy, who will teach us how to create a unique stencil that can be used to apply images to variety of mediums.

This virtual event will be streamed on Ogden Museum’s Facebook.