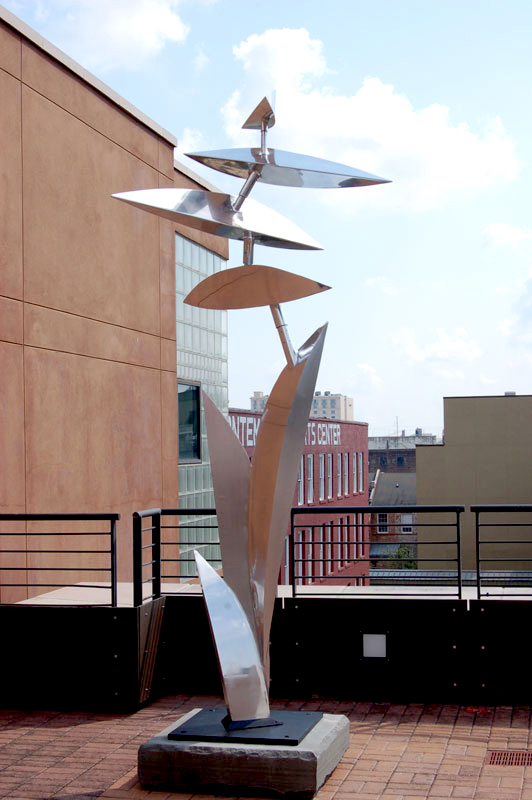 Ogden Museum of Southern Art is sad to share that New Orleans artist, Lin Emery, has passed. In 2012, Ogden Museum presented Lin Emery an exhibition of four of the artist’s most ambitious theatrical sculptures. That same year the Museum presented her with the Opus Award for Lifetime Achievement. The artist’s monumental kinetic sculpture, Mitre, is an iconic work from the Museum’s permanent collection. She has been included in multiple exhibitions at Ogden Museum, including The Whole Drum Will Sound: Women in Southern Abstraction and Tina Freeman: Artists Spaces. Currently, an early work can be seen in the exhibition, Built: Sculptural Art from the Permanent Collection and two collaborative works can be seen in Outside In, Improvisations of Space: The Ceramic Work of MaPó Kinnord.
⁣
Perhaps no other artist has had a greater impact on the contemporary art scene of New Orleans than Lin Emery. A founding member of the first artist cooperative in the city, Orleans Gallery, she actively supported and contributed to the New Orleans visual art dialogue for over 70 years. Her commanding presence could be seen anywhere art was celebrated, from the grand rooms of museums to small alternative spaces in the deep Bywater. As a teacher and mentor, she inspired generations of younger artists. Her public works are found throughout the nation, but have had a particular impact on the visual landscape of New Orleans. As an advisor and supporter, she helped define local institutions such as New Orleans Center for Creative Arts, Arts Council of New Orleans, Contemporary Arts Center of New Orleans and Ogden Museum of Southern Art. ⁣
⁣
As an artist, she has contributed greatly to the development of kinetic sculpture. Whether powered by wind, water or magnets, her most successful works move beyond the traditional definitions of sculpture, and into the realm of dance and theatre. Both her work and her very being expressed balance, movement and the physical manifestation of ideas. She leaves behind a legacy in sculpture that is thoughtful, innovative and elegant.⁣