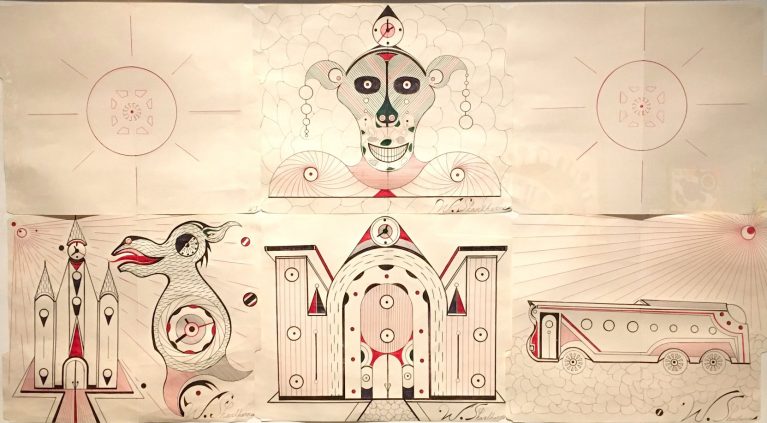 Is it a map to hidden treasure? Could it be a code to find the Holy Grail? Might it be the order of a shamanic ritual, a secret message of freedom to the Underground Railroad? Or could it depict the inner workings of a one-time inmate at one of the most notorious prisons in the country, if not the world…Angola?

The first piece of art that I saw by Welmon Sharlhorne was this untitled piece that often hangs in a gallery on the third floor of the Ogden Museum. I was drawn by the fantastical imagery and still am. It is made up of six Manila folders, with a top and bottom row of three folders each. The drawings have a certain precision and symmetry. The circles and rectangles are perfectly drawn and the buildings are architectural. The pathways leading to the two buildings lend perspective to the drawings which otherwise seem to float in an alternative reality.

The only materials that were used to create this piece were Manila folders and red and black Bic pens. While serving time at Angola, these materials are what you could get from the guards to write your lawyer, even though Mr. Sharlhorne represented himself. He used bottle caps and jar tops to create his perfect circles and also used the edge of the Manila folders to draw his perfectly straight lines. The materials and tools used are the only minimalistic aspects about Mr. Sharlhorne and his ink drawings.

His life story is much more detailed. He was born in 1952 and spent his childhood in Houma, Louisiana. He moved to New Orleans and is in every respect a New Orleanian. Back then he worked in landscaping, which was called “doing yard work.” He had a disagreement with one of his clients about what she owed him and she called the police on him. It was her word against his, his being a black man’s word that led to over twenty years in prison. Not just any prison, but Angola.

Mr. Sharlhorne came out of Angola a self-taught artist. In fact, his artwork got out before he did. He sold pieces to fellow inmates who then gave them to people on the outside. Now his work is located in museums and private collections across the country, including the Smithsonian and the Ogden. He currently lives in the Treme, where he goes by the name, “Uncle Shadow.” These days, he continues to makes his drawings using Bic pens and matboard, even though he has the ability to use any medium.

I met him once at the Ogden Museum. He told me his story mostly in rhyme and told me how art freed him, even when he was in prison. The most amazing thing that he mentioned was that he had forgiven the woman who put him behind bars. He even went to her house to tell her so. Now that he is a free man.

There are so many symbols in this piece, such as open doors, a clock, a church and a bus. I decided it’s not for me to know what each of them mean. This is the lexicon of Mr. Sharlhorne’s path to freedom. Still it resonates with something essential in me. ‘A map to hidden treasure, a code to find the Holy Grail, the order of a shamanic ritual, a secret message of freedom or the inner workings of a man serving undeserved time at Angola.’ Untitled is all of the above if you ask me.