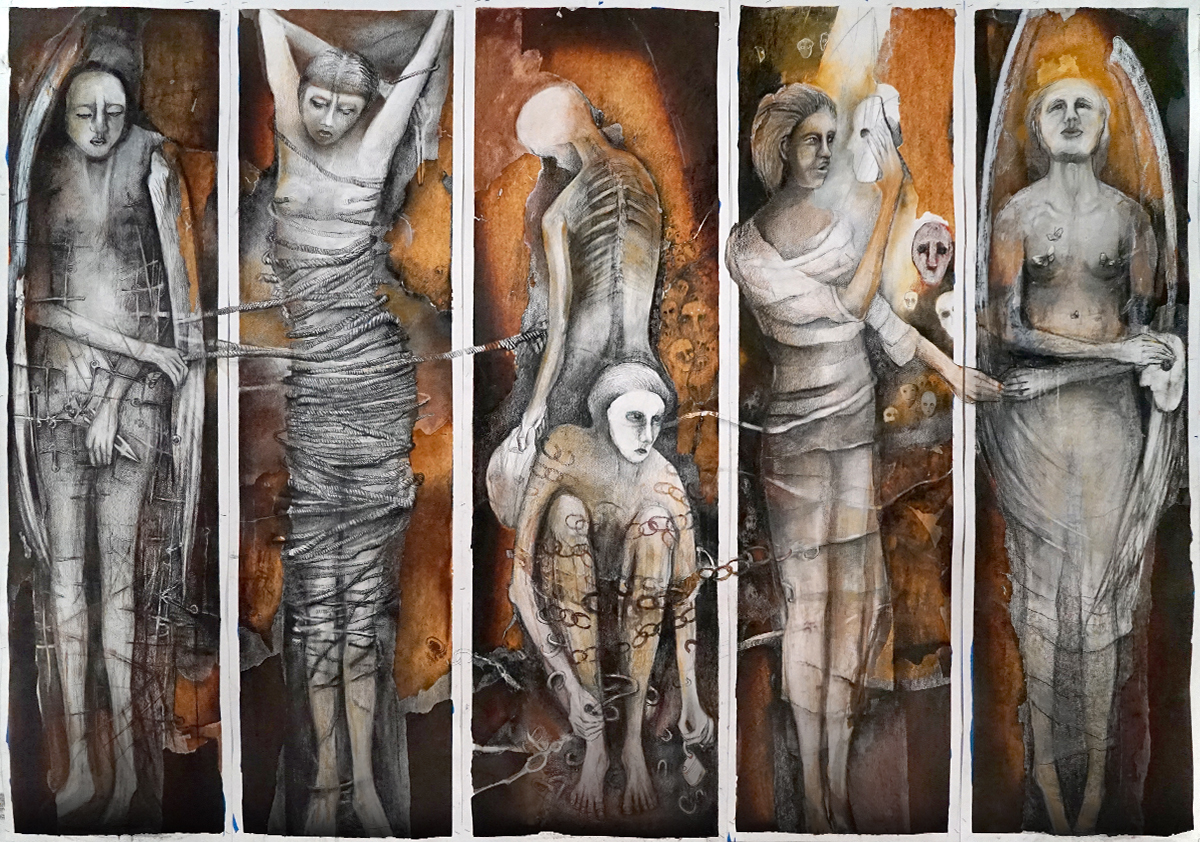 Sharon Kopriva, Breaking Bonds, 2019, Graphite and collage on paper, Collection of the artist

In honor of Women’s History Month, we are highlighting artist, Sharon Kopriva. Sharon’s work is included in the exhibition, Entwined: Ritual Wrapping and Binding in Contemporary Southern Art.

Sharon Kopriva, a Texas native, currently works in Houston, Texas and Hope, Idaho. She earned her M.F.A. in painting from the University of Houston in 1981. Since her inauguration with the Fresh Paint exhibition at the Museum of Fine Arts, Houston in 1985, Sharon has exhibited nationally and internationally. For more than 30 years, Sharon has combined two and three dimensional media, often with fusions of papier-mâché and found objects. Her career has taken her through investigations of pre-Colombian cultures in Peru, examinations of her Catholic faith and inspirations from the spiritual forests of the beautiful Pacific Northwest.

Let’s get to know Sharon Kopriva!

1. What inspires your work included in Entwined?

The five pieces in Entwined are both two and three dimensional and of varied materials, most done between 2015 and 2020, except the little snake painting, which was started around 2008, revisited and completed in 2019. Most of my works are inspired by religion (Italian Catholic), history and social issues.

Earth Mother and Lena Tuber were both completed in 2015 at a time when I was searching for a more organic method of sculpture-making. I think I was inspired by a large spool of manila rope, which helped me recall a technique of rope binding I learned from artist and teacher, Bill Lockhart, at a Texas Tech University summer session in Junction, Texas, in the early 1970s. We built abstracted coil forms. Thirty years later, the main difference was my desire to make objects like these in personage, guiding them into figure forms while leaving some of the more interesting accidental undulations. The end results were vessel tubers, which were inspired by and referenced Earthen and Neolithic headless vessels. I like to think they hold secrets from past worlds in their hollow shells.

Breaking Bonds, 2019, is a large multi-media drawing, mostly graphite. It was directly influenced by the “Know Your Value”, “Me Too” and other women’s movements. This is discussed in more depth in question #4.

Red Haired Witness, 2020, was a personal memorial to the passing of a very close artist friend. Wrapped in a swirl of birds, my friend’s spirit is being carried away. She is a witness. She knows.

Eden’s Serpent was inspired by The Garden of Good and Evil. My little snake may not always be up to worldly good.

2. Are there any specific techniques in binding and wrapping used in your work? What specific mediums do you prefer to use?

The rope binding technique, used on Earth Mother and Lena Tuber, I learned from Bill Lockhart. We developed abstract coiled forms by untwisting the rope enough to slide a core rope through and then letting the rope return to its original position. This method is repeated about every third inch. As one continues around this coiled form, you can build the form the way you would a coil pot. Moving the rope toward the center will decrease the diameter, while moving it away from the center will increase the diameter. Of course, turning this rather abstract procedure into a personage was an exciting challenge, but one worth the effort.

3. Throughout your career, do you feel your work and/or technique has evolved in any way? How and why?

I do not feel any person, anywhere, should ever cease evolving. As an artist, I am constantly developing and learning new techniques, yet unlike the high tech and medical fields, I can always return to a process I have used in the past. For instance, the rope binding procedure used on the tuber rope sculptures in the Entwined exhibition, I had not used since the 1970s. I am working through my life with my art and I am working through my art with my life. Though it may vary in content and technique and sometimes move back and forth, it is all done with the same hand. I am marking my book, chapter by chapter. By the end, it should make complete sense, right?

4. Can you give some insight into the meaning and process behind your piece, Breaking Bonds?

More than any other time in my life, I am aware of women breaking bonds and barriers. Some are overcoming negative physical situations, finding strength from their inner voices. Many others are removing psychological masks that symbolized what society has traditionally chosen for them. Breaking Bonds is about that momentum – women cutting themselves loose from real or invisible fences, untwining, breaking chains and uniting to help each other reconnect to find fulfillment and to revisit their dreams and reach new goals.

I knew I wanted to make a 10 foot drawing and I knew it had to be divided into smaller units so that I could carry it to Japan for an exhibition in the summer of 2019. I wanted five women, each unique and representing a mixture of races and generations. Developing a large drawing gave me great freedom to add, erase and redo multiple times. The theme and content developed with the drawing. In the first three panels, the women wore masks. The woman in the fourth panel is removing hers. Each woman in the first three panels has been given a tool to aid in the removal of her barrier. The woman in the middle panel has unlocked all of her chains. Somewhere in the development of the drawing, lines of rope and chains began to cross through the borders of the margins uniting my women in freedom with the same ropes and chains which had originally bound them. In the fifth panel, my woman is no longer bound.

While working on the drawing, I revisited Picasso’s Les Demoiselles d’ Avignon, 1907, a painting which also deals with five women and transition, though not at all in the same context. Body parts become moving lines and elements in his painting, transforming finally into abstract cubism. It is this fluid form that I wanted to reference in my drawing. Picasso’s five women were from a brothel, and as far as I know, stayed there.

5. What does Women’s History Month mean to you?

Women’s History Month is a great time to look back at accomplishments of women in our generation and women who have lived before us, paving the way, many with no acknowledgment. My book club is reading the book, “A Woman of No Importance” by Sonia Purnell, which is about one of these women. It is also the time to look forward to our future. I do believe many doors have been opened for women… by women. I believe we have to feel our own value (Thank you, Mika) before we can remove things that bind us, real or invisible. My childhood was a lucky one. Seldom was I told I could not do something because I was female. I don’t think I was ever treated differently, but I do remember falling out of a few trees. My father had a boat and an outboard motor shop. I worked there in my teen years after school and during summers. I sold motor parts. No one seemed to mind purchasing parts from a girl. They just wanted to go fishing. If Ginger could do it just as well as Fred, backwards and in high heels, just think what we can do if we ditch those shoes! After all, we really just want to dance, don’t we?

“A Woman of No Importance” by Sonia Purnell

“Knowing Your Value: Women, Money, and Getting What You’re Worth” by Mika Brzezinski