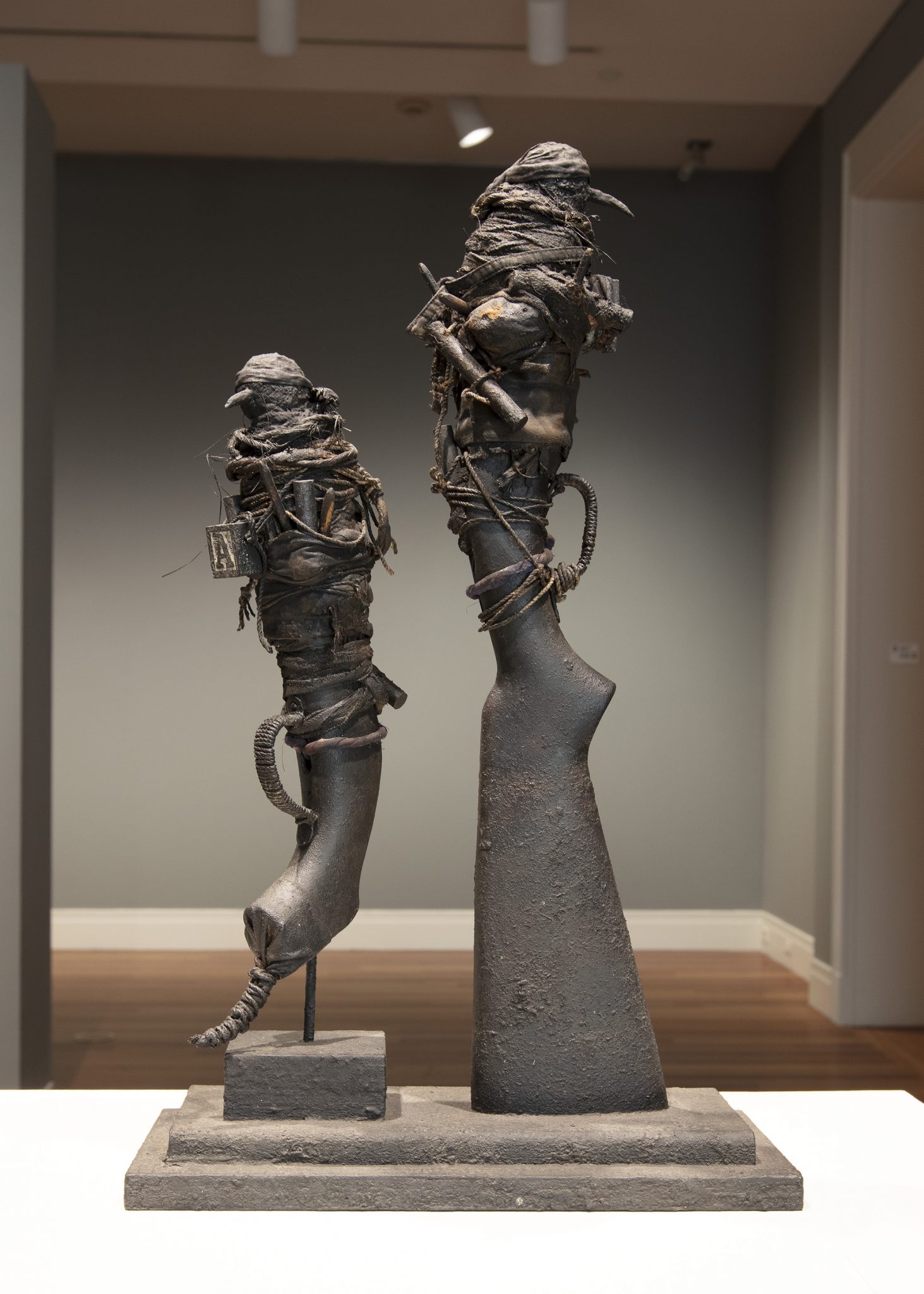 Jeffrey Cook was born in New Orleans in 1961, and was raised in the culturally rich neighborhood of Central City. He attended McDonogh 35 High School before studying under John Scott and Martin Payton at Xavier University. Moving west, he furthered his studies at the San Francisco Art Institute. While in California, he became principle dancer for the Los Angeles Repertory Company, a position that allowed him to perform in Bulgaria, Yugoslavia, Greece, Italy, Hong Kong and Scandinavia, as well as several major stateside cities. His dance career also included a stint as a Solid Gold dancer, and a brief role in the 1984 film “Breakin'” (uncredited).

In the mid-80s, Cook returned to New Orleans, establishing a studio in the neighborhood of his youth, Central City. Cook began to collect debris from the street, the detritus of urban blight and renovation. With a renewed focus on visual art, he created brightly colored paintings and richly textured assemblages, sculptures and collages that spoke to the patina and spirit of his home. He began to incorporate found objects, signs and handmade dolls to comment on the social and physical neglect of a community, combined with a nostalgia for the neighborhood’s former glory and hope for the future.

Visiting French Quarter galleries – including Barrister’s on Royal Street – Cook was exposed for the first time to the rich tradition of African Art. His work began to take on the dark patina and forms of ethnographic objects. Drawing from the beliefs of his New Orleans/African/Caribbean heritage, the history and aesthetics of American/African/African American Art, and the diverse and colorful textures and forms of his neighborhood – Jeffrey Cook created a visual vocabulary uniquely his own. His visual language was coded and full of secrets and hidden meaning. He would often wrap objects, prayers or wishes into ritual bundles within his sculptures. Iconic symbols like the bird form or the prayer flag were transformed to suit his own narrative. The signature of Clementine Hunter became a bird cage, and children’s blocks became signifiers of the past.

Take, for example, the small sculpture that melds the bird form and the gun form. Made as an offering and homage to two friends who died from gun violence, with this work Cook references the wrapped fetish figures of Tanzania and also the head wraps worn in contemporary American culture. He depicts his fallen friends as birds – a symbol that has held power and the magic of protection and support within various African mythologies for centuries. With this piece, he draws from ancient sources and personal experience to create a contemporary ritual sculpture through wrapping and binding meaning and emotion to the object. 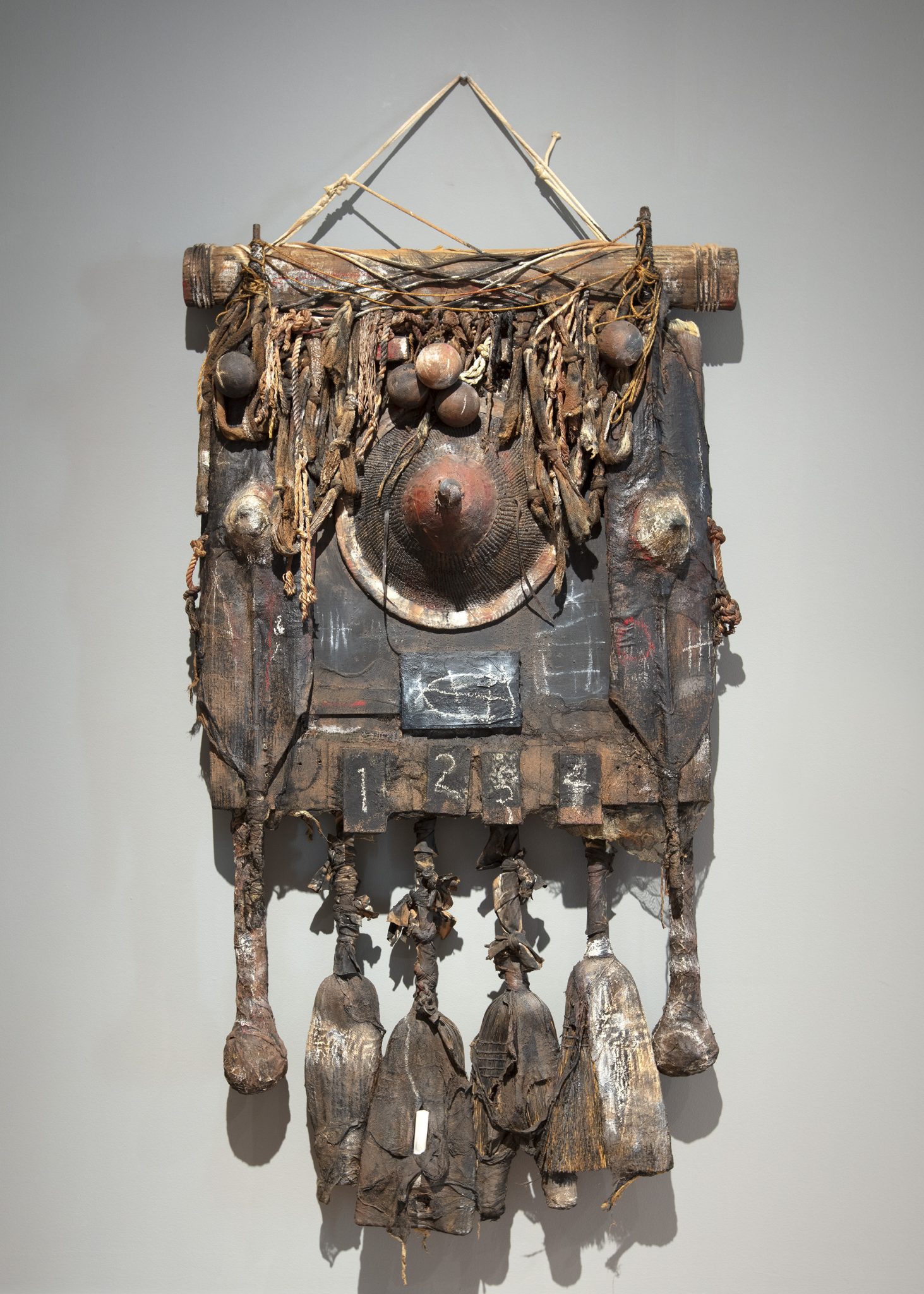 Jeffrey Cook expanded his knowledge of African Art while working as a preparator at New Orleans Museum of Art. Having access to the Museum’s African Art Collection – as well as his friendship with curator Bill Fagely – allowed Cook to closely study particular objects. In the large Untitled (Sacred Emblem), we see Cook making a direct reference to the Ngbe Leopard Society Lodge Emblem held in NOMA’s collection. Ngbe is a male law enforcement society within Ejagham culture in Nigeria. It is still an active part of that society today. A Sacred Emblem is tied to the central pillar of the lodge, and acts as a mnemonic device, as the objects attached have secret meanings known only to the members. One common symbol is the broom in these emblems. The broom is known to represent the ritual cleansing of evil. Ron Bechet of Xavier University describes the ones in Cook’s piece as “brooms that hark to his grandma’s Hoodoo spiritual purification rituals involving brooms and Florida water.” The sculpture also includes a set of oars or paddles flanking the edges. Perhaps these oars signify the Middle Passage bringing enslaved Africans to the Americas. A piece of chalk is embedded in the broom corn of a central broom, and a childlike mark leads to a bird cage formed from the “mark” of Clementine Hunter. In the center of the composition, a large African hat sits like a shield. In this single piece, Cook creates a narrative of his childhood and family history, of the lineage of African American Art in Louisiana, and of its roots in Africa. 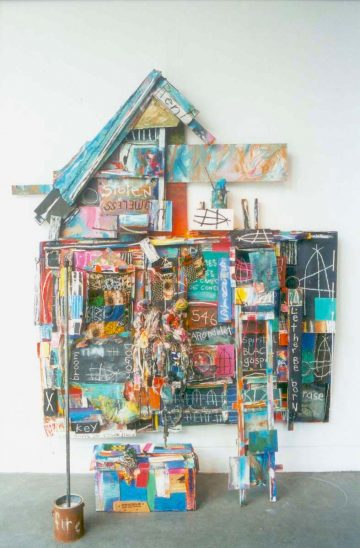 Jeffrey Cook, Makin’ of a Melody, 2002, Mixed media, Gift of the Artist

Jeffrey Cook is an artist who was not only deeply influential on the art world of New Orleans and beyond, but who is also an artist and educator that is closely tied to the history and mission of the Ogden Museum of Southern Art. Prior to the opening of Goldring Hall, Cook was one of the first educators in the Museum’s Artist and Sense of Place residency program. During construction of the Museum’s main building, Jeffrey Cook and Roger Ogden symbolically hammered in the first nail to hang the first painting. During the Museum’s Grand Opening, Cook performed a dance choreographed specifically for that event. One of his works in the Ogden’s permanent collection, Making of a Melody, contains objects from those early years (flyers, announcements, ribbon from Grand Opening) hidden away in the sealed spaces of the sculpture. In this way, Cook’s vision and spirit is forever wrapped around and bound to the Ogden Museum of Southern Art’s history and mission.

Contributed by Bradley Sumrall, Ogden Museum Curator of the Collection.