In celebration of Earth Day, we’re examining Mark Messersmith’s piece Victim of Silence, a representation of the natural world. 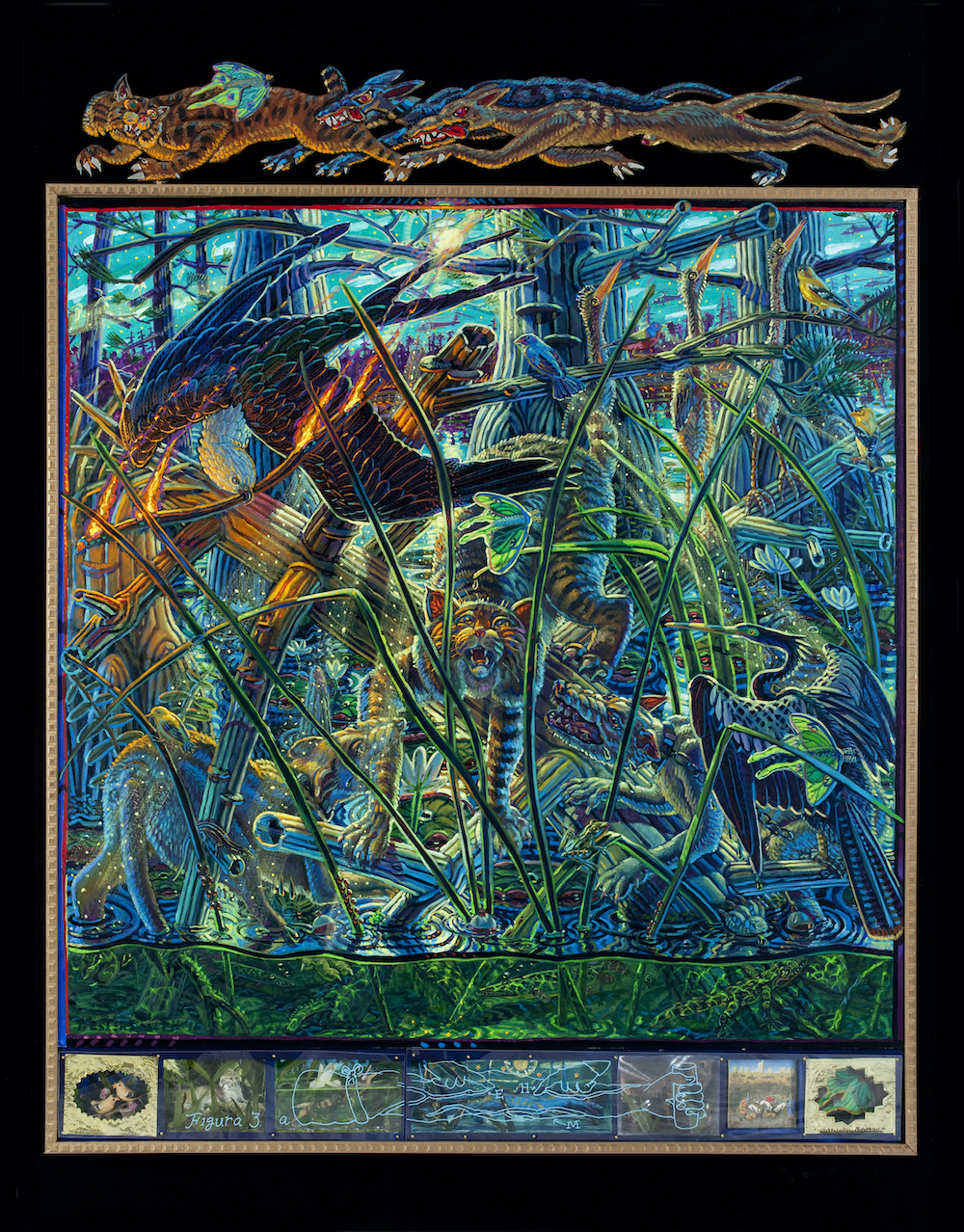 Mark Messersmith, Victim of Silence, 2011, Oil on canvas, Gift of the artist

When Mark Messersmith first moved to Tallahassee, Florida in the mid 1980s, he was immediately struck by the wildness of the surrounding landscape, a wildness gone from much of America. His studio practice immediately turned to an exploration in paint of the tension between this wild, living place and ever-increasing human expansion. Drawing on inspirations ranging from the Pre-Raphaelites, Martin Johnson Heade, Southern folk art and medieval manuscripts, the paintings of Messersmith are dense, radiant and sculptural depictions of the flora and fauna of northern Florida struggling to survive.

With his large sculptural canvases, Messersmith creates a narrative where animals, insects and plants are in constant struggle. The struggle is often with the natural cycles of life and the food chain but more noticeably against the onslaught of human expansion. These canvases are embellished with carved pediments inspired by medieval manuscripts that act to highlight the theme of the narrative. Along the bottom of each canvas, a series of predellas in the tradition of medieval altar pieces serve to expand the narrative. Yet each of these works, like all of Messersmith’s paintings, focus as much on light and color as they do a narrative.

Going out regularly into the wetlands and marshes south of Tallahassee, Messersmith documents natural performances such as the changing light of a day passing in the wild, with his lushly-colored plein air landscapes. This obsession with light and the passage of time is carried back into his studio.

In this painting from the Ogden Museum of Southern Art’s permanent collection, a scene of great violence is played out in a lush cypress swamp, filled with lotus and lichen. In the center of the composition, a bobcat is being attacked by domesticated dogs. Dogs in Messersmith’s painting are stand-ins for humans and their destructive tendencies. In the water are fishing bobbers (plastic remnants of a human presence), and in the sky fly helicopters (a constant reminder of man’s world just outside the forest). A raptor brings fire in his beak to light the scene, and a heron bears witness to the carnage. Around the protagonists, the swamp is filled with life such as songbirds, luna moths, water birds, garfish and alligators.

By placing the carved figures of domesticated dogs as pediment for this painting, the artist sets the theme of this work, which is mankind’s destruction of the natural world through expansion and development of the world’s wild places. By titling the painting Victim of Silence, the artist urges the viewer to make their voices heard in the struggle to maintain the delicate and embattled natural systems of our world.