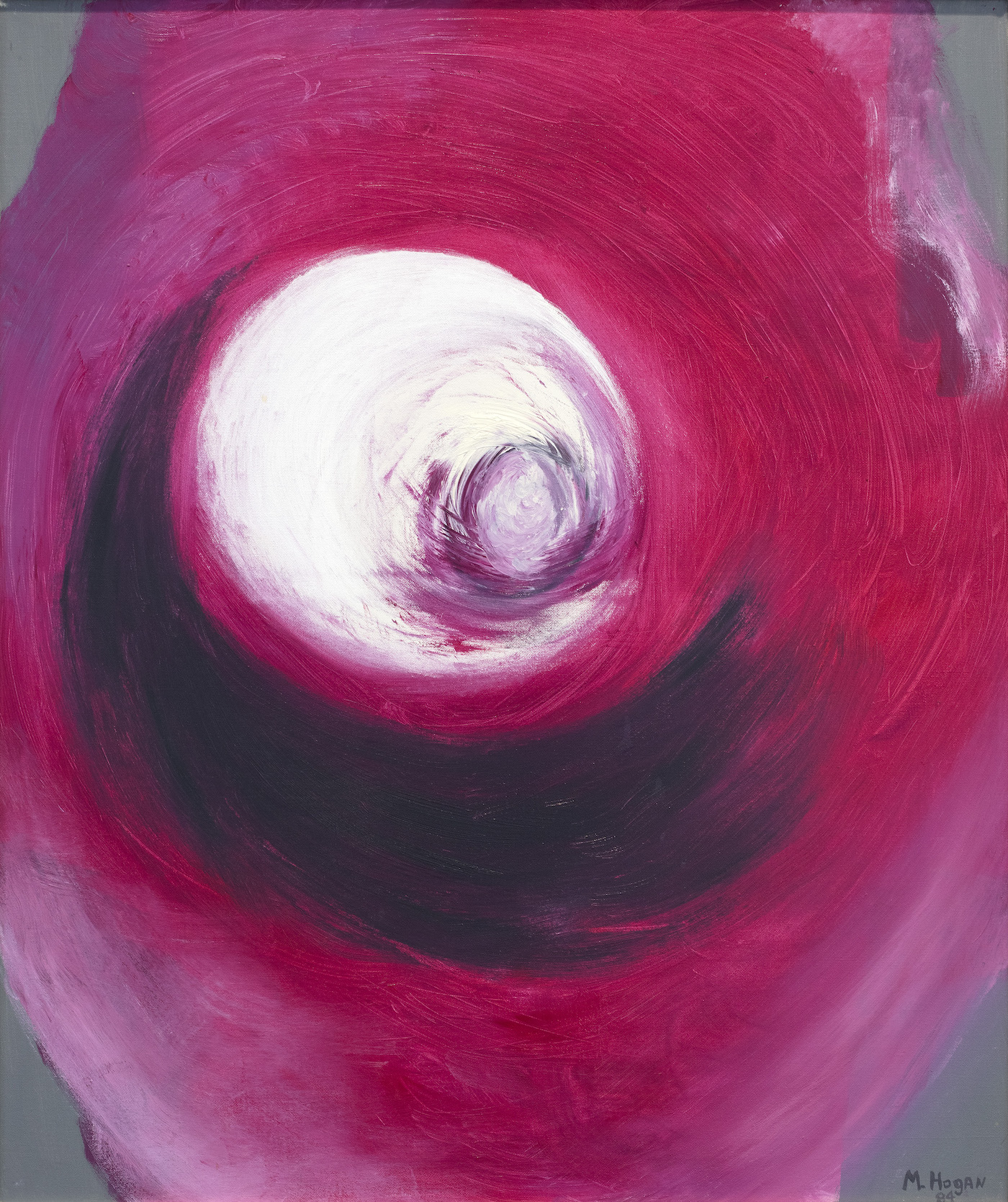 In honor of Black History Month, we are highlighting Turning Wheels by Moses Hogan, an arranger, pianist, conductor, composer and visual artist. Turning Wheels is on view through July 5 in What Music is Within: Black Abstraction from the Permanent Collection.

Moses Hogan was born in New Orleans, Louisiana on March 13, 1957. Moses manifested his musical talent at young age. He anticipated the sound of church bells and guided his uncle Edwin Hogan’s choir by waving his hands as they sang. He was a graduate of the New Orleans Center for Creative Arts (NOCCA), Oberlin Conservatory of Music in Ohio and he also studied at New York’s Juilliard School of Music and Louisiana State University in Baton Rouge. Throughout his life, he created a number of new original arrangements of classic spirituals, and formed several choirs such as the Moses Hogan Singers and the Moses Hogan Chorale. He also served as editor of the “Oxford Book of Spirituals.”

In 1980, he took over his uncle’s choir once he stepped down as director. Inspired, he developed a larger musical composition for the group and a name, New World Ensemble. Moses began recruiting more New Orleans based vocalists as his eagerness for performing spirituals grew. He then formed a new group called the New Orleans Heritage Choir in 1994. In that same year, he made the critical decision to form The Moses Hogan Chorale by combining the two groups. Performances were a great success not only for exposing the vocalists, but for exposing Hogan’s arrangements to choral directors in the audience who would urgently seek copies of his work.

Hogan is considered the world’s greatest arranger of spiritual music. His contemporary settings of spirituals, original compositions and other works have been admired by audiences and commended by critics worldwide. His arrangements are still being used as the foundation for high school, college and university choirs today. In fact, his music performed by the Moses Hogan Chorale impacted a choir director who attended the American Choral Directors Association (ACDA) who stated, “When I looked at the program last night and saw that the choir was only going to be singing Mr. Hogan’s arrangements, I thought to myself, ‘What kind of director brings a choir to an event like this and sings only his arrangements?’…After the performance, I understood why: there’s simply no one else writing music like this!”

Moses Hogan was not established as a visual artist. Painting was done at his leisure. In the late 1990s, he shared his painting with his friend, Roger Ogden. Roger’s response was, “Moses, is there any art form you don’t excel in?” As the Ogden Museum of Southern Art was being formed, Moses Hogan and Roger Ogden donated Turning Wheels to the Museum’s permanent collection.

Curator of the Collection Bradley Sumrall writes, “In Turning Wheels, Moses Hogan explores a symbol in paint that he had already deeply explored in music. Hogan’s arrangement of the spiritual, Ezekial Saw de Wheel, is perhaps his most celebrated work. Ezekial’s Wheel is a symbol that resonated deeply with Africans that had been forced into slavery in America. It was a Christian version of the cosmogram, a core symbol of Kongo culture. Historically, the wheel symbol became a powerful tool for conversion of African slaves to Christianity, and the rituals associated with the cosmogram of Kongo culture were converted to the ring shout of African American spiritual tradition. With this painting, Hogan brings together his music, art, cultural history, complex identity and his belief system. It is a powerful painting from someone not widely known as a visual artist.”

The connection to the title What Music is Within, not only relates to his career as a composer, but his expression as a visual artist as well. It is evident that music came out of him as easily as breathing. He had his own unique talent of expressing abstract ideas and emotions. Those who knew him would debate that he could have succeeded in any medium he chose to pursue.

“My poetry, I think, has become the way of my giving out what music is within me.”

– Countee Cullen, a poet and representative voice of the Harlem Renaissance

Resource: A Tribute to Music Genius Moses Hogan by Walter Bonam in The New Orleans Tribune