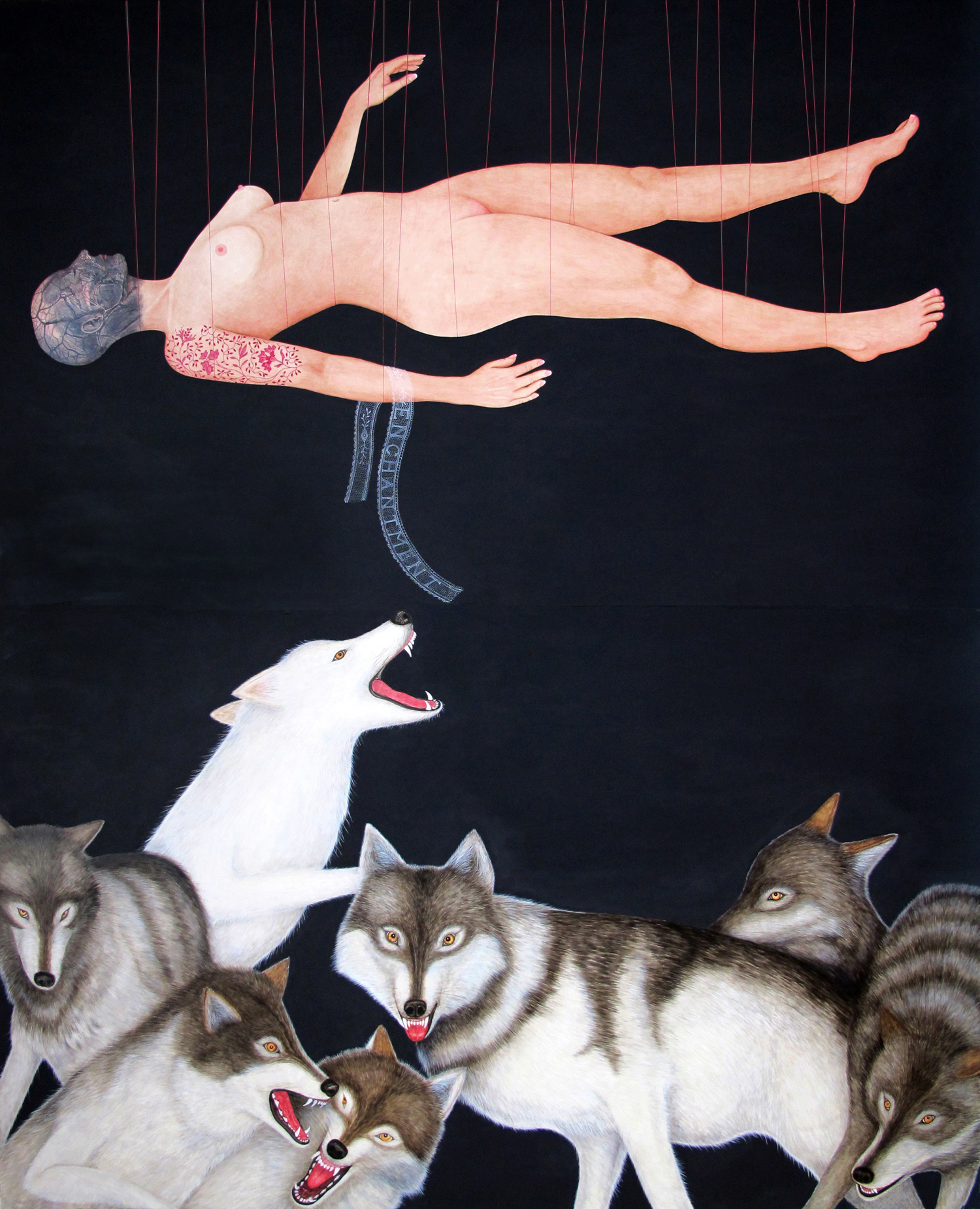 Susan Jamison, Above the Pack, 2010, Egg tempera on panel, Collection of the artist

Susan Jamison is a visual artist based in Roanoke, Virginia. Jamison earned a B.F.A from James Madison University, and a M.F.A in painting from Rhode Island School of Design where she received the Award of Excellence. Her paintings have been featured in three volumes of New American Paintings. She was a recipient of the Lillian Orlowsky and William Freed Foundation Grant for painting in 2014. Her works are held in the collections of the Indianapolis Museum of Art, The Mint Museum, The Eleanor D. Wilson Museum at Hollins University, Longwood Center for the Visual Arts, and numerous corporate and private collections.

The work of Susan Jamison is visionary and intuitive, drawing from her own subconscious world of female archetypes and animals to weave a narrative of ritual and spiritual significance. A multi-disciplinary artist, Jamison utilizes painting, drawing, fiber sculpture and installation to express her vision. Her work is populated with a personal menagerie of creatures, binding metaphor and meaning from various sources – fairy tales, witchcraft, world mythology – to her own story of feminine power and ecological awareness.

Ritual and metaphor begins in her work with the very choice of medium, egg tempura. An ancient medium, egg tempera was used to decorate Egyptian sarcophagi. It was the medium of choice for religious painting from the Fayum mummy portraits and early Syrian synagogue murals through Byzantium and into Medieval and Early Renaissance Europe. By choosing this antiquated and complicated medium, Jamison is signaling that her work is tied to a spiritual tradition in painting. By choosing egg yolk as the binder for her pigments, she begins the ritual of painting with the very alchemy of life.

In the five paintings included in this exhibition, Jamison uses wrapping and binding imagery to convey a range of concepts. Although her work in paint does not involve the actual physical act of wrapping and binding, it powerfully illustrates this ancient practice in all of its ritual power.

In Weaving Ritual, for example, she draws inspiration from Charlotte’s Web – her favorite book as a child – to explore humanity’s connection to nature. In this painting, an orb-weaver spider hangs from a web of red thread. The thread is also connected to a needle, which has connected the spider and the weaving to the fingertips of a woman. Red thread is used in binding and protection rituals throughout the world, including the red thread of fate in Chinese mythology, the kautuka protection thread in Hinduism and the crimson string talisman in Kabbalah. Weaving itself is an act of creation often tied to creation myth, and traditional fiber art is historically the endeavor of women in society. Perhaps the spider in this painting is Grandmother Spider (Hopi, Navajo, Zuni) who, along with the Sun, created the world. Perhaps she is Arachne (Greek) who wove better than the Gods, or Mama Ocllo (Inca) who taught the Incans to weave. Perhaps she is all of these and more, representing the connection between female energy, “women’s work” and the mythology of creation. The artist may have been inspired initially by a simple children’s story, but through her choice of elements – female hands, red thread, needle, web and spider – she brings centuries of narrative allegory, visual metaphor and spiritual symbolism to the painting.