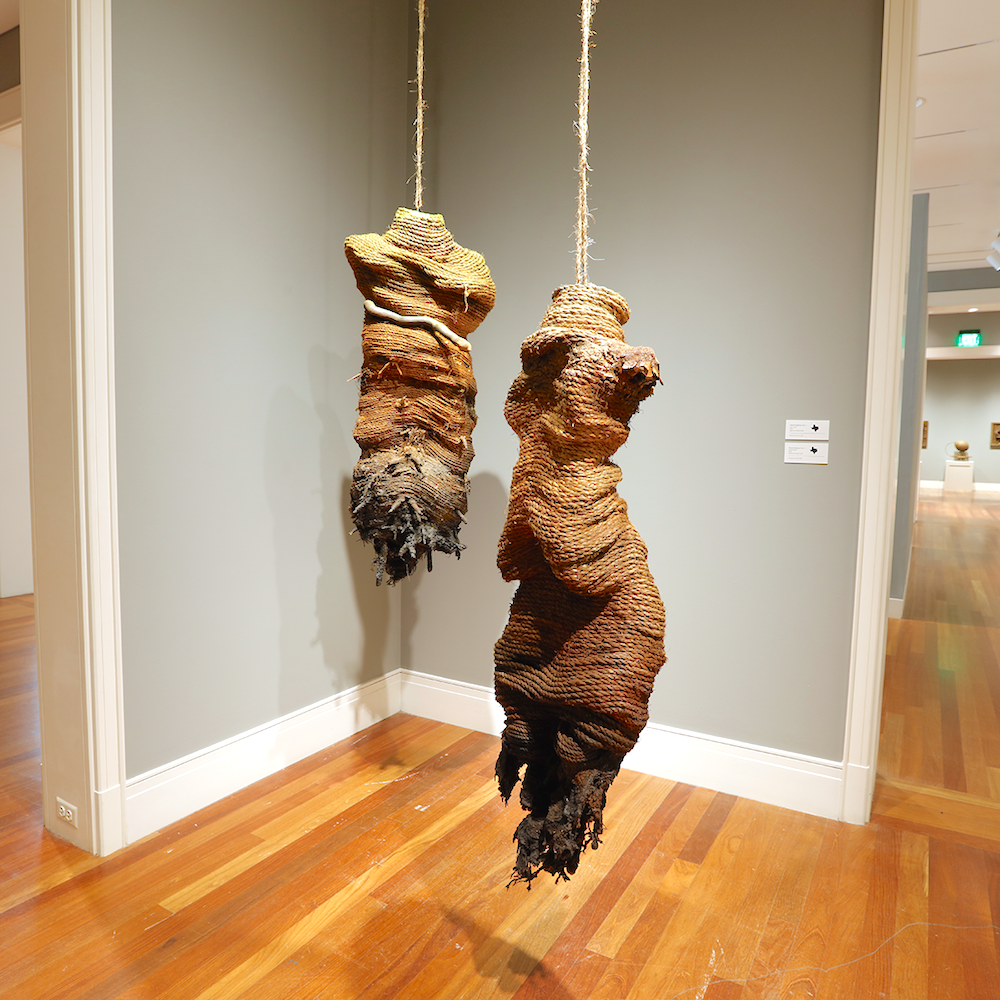 Sharon Kopriva is a multidisciplinary artist who lives and works in Houston, Texas and Hope, Idaho. Known primarily as a painter and sculptor, she also works in installation and printmaking. Drawing from her Italian Catholic upbringing in Houston and her connection to the forests of the Northwest, Kopriva creates work that is both highly personal and universally relevant – often commenting on current environmental, spiritual and sociopolitical issues.

In her most recent studio production, Kopriva’s sculptural work has intentionally made a turn towards abstraction through a series she titled Tubers. Working with rope, she wraps the material around empty space, allowing the rope to guide her hands, binding the fiber together till an abstracted human form emerges. Through the use of simple abstract and iconic forms, Kopriva creates figures that have many access points for interpretation. In Earth Mother, for example, we see the figure of a woman emerge with a snake inferred through the inclusion of a simple piece of driftwood. She is Gaia. She is Eve receiving the knowledge of good and evil in the garden. She is the Aztec mother goddess, Coatlicue (skirt of snakes), who gave birth to the moon, the stars and the god of the sun. She is Pachamama (Earth Mother) with the Inca snake deity (wisdom, knowledge, the underworld) wrapped around her waist. Through the meditative ritual of coiling, wrapping and binding rope around empty space, she creates headless figures that float in the room – speaking to life, death, nature and the spiritual world, and also to the chord that connects it all.

The wrapping ritual and binding practice in her sculptural work has greatly influenced her most recent drawings and paintings, both conceptually and compositionally. In Eden’s Serpent, we again see the biblical serpent represented. The serpent is wrapped around the tree, and its fangs are bared to the viewer. Perhaps, this snake is defending tree of the knowledge of good and evil. Perhaps in this version of the story, we as humans remain in the Garden – without choice and without the ability to destroy Eden.

In Breaking Bonds, Kopriva represents women breaking free of the things that bind them. Inspired by the “Know Your Worth” and “Me Too” movements, Kopriva has depicted a diverse group of women breaking bonds and barriers. Some are escaping physical bondage, while others are removing psychological masks that symbolize restrictions placed upon them by society. The women in this painting are untwining the bindings that hold them back, yet each figure is connected by a chord that binds them all in unity and power.

In Red Headed Witness, Kopriva depicts her late friend, artist Nancy Kienholz, wrapped in a cyclone of white birds. Her gaze is directed at the viewer, calm and knowing, and her fiery hair is floating among the flutter of bird wings. She used the birds “to move a spirit and free it of its bondage to Earth,” she explained. By wrapping the figure in birds, Kopriva is symbolically binding her up towards Heaven. “I was hoping to give her a little momentum,” she explained.

The works of Sharon Kopriva in this exhibition utilize binding motifs in ways both physical and symbolic. Through the use of coiled rope sculptures that are reminiscent of Peruvian basketry, she abstracts the human form through an organic and intuitive process. She engages the primal coil of the snake and the ecstatic murmuration of birds to depict spiritual concerns. She tackles pressing social issues through symbolic binding and breaking of bonds, allowing her figures to bind themselves together in unity while breaking free of the negative situations to which held them back.