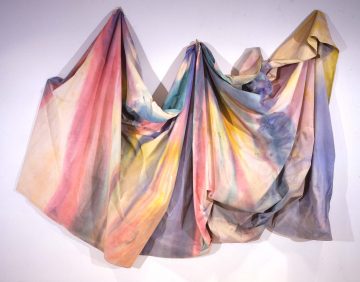 Sam Gilliam is an African American artist that works in color field painting and lyrical abstraction. Gilliam lives and works in Washington D.C. He was a pioneer of Black Abstraction during the 1960s, a time when Abstraction was considered “irrelevant to Black African Life.” Around 1965, he joined the Washington Color School movement which focused on creating paintings in large scale with color fields. Paint was often applied through a pouring process that resulted in a stained effect without brushstrokes. Gilliam is recognized as the first artist to introduce the idea of the unsupported canvas, a painting without stretcher bars. He was also featured as the first African American artist in the 1972 Venice Biennale. In 2017, he was invited back to the Venice Biennale once again. At 84, Gilliam is still creating work in his studio and exhibiting internationally.

The folds, highlights and shadows in Gilliam’s piece Drape Work invoke a lyricism he often observed in the hanging of laundry on a line outside his studio. This movement inspired him to create this color-field painting, which hangs off the traditional frame and merges both painting and sculpture.