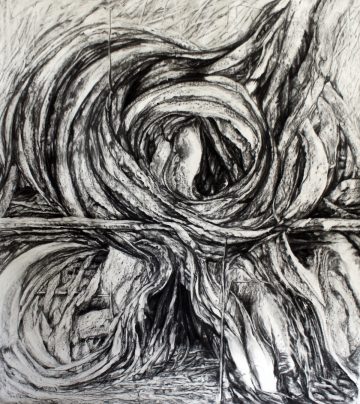 Ron Bechet is an abstract painter from New Orleans and a relative of the early jazz pioneer Sidney Bechet. He began drawing in the fourth grade, studied art at the University of New Orleans and went on to earn a graduate degree from Yale University. He returned to New Orleans for good in 1982 and soon began a career in teaching art, first at Delgado Community College, then at Southern University in New Orleans and, since 1998, at Xavier University.

Bechet’s paintings reflect the inherent abstraction in thought, and he once said, “There are questions I can’t answer, that’s why I paint.” His works explore the interstitial zone between ideas, such as reality and illusion; the boundary where both entities exist or are possible. Trees and nature are a common theme in Bechet’s painting. For many years Bechet shared a studio with the renowned New Orleans sculptor, John T. Scott. Ron Bechet is currently the Victor H. Labat Endowed Professor of the Arts at Xavier University in New Orleans.