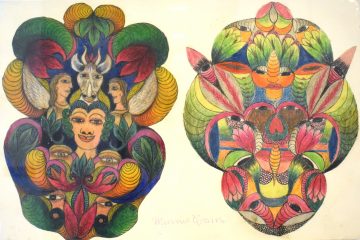 Born in 1892, Minnie Evans spent most of her life in or near Wilmington, North Carolina. In 1916, Evans began working for a wealthy industrialist, Pembroke Jones, as a domestic in the family home. Her husband was also employed by Jones, and the Evans family lived on the Jones family hunting estate. After Pembroke Jones died in 1919, his widow, Sadie, married Henry Walters and moved to Arlie Estate. Evans continued her employment with the new family. After Walters died, Sadie decided to turn Arlie Estate into gardens. The Arlie Gardens would become one of the most celebrated gardens in the South. After Sadie Jones died, the new owners of the Arlie Gardens hired Evans as gatekeeper for the property. She held the position for the rest of her life, collecting admissions from visitors.

In 1935, on Good Friday, Minnie Evans made her first two drawings. After completing the ink-on-paper abstractions, Evans heard a voice that said, “Why don’t you draw or die?” She did not resume her drawings until 1940. Her next works were pencil and crayon. Later works also included oil paint, mixed media and collage. Her work depicted religious or nature scenes. Many of her works were inspired by the plants at the Arlie Gardens. Her compositions were mostly abstractions blending nature with the face of God. Her work is known for highly charged color and meticulous symmetry, and is often compared to Buddhist mandala paintings.

“We talk of heaven, we think everything is going to be white. But I believe we’re going to have the beautiful rainbow colors.” – Minnie Evans