Education: New York University, NY and Cooper Union for the Advancement of Science and Art, NY 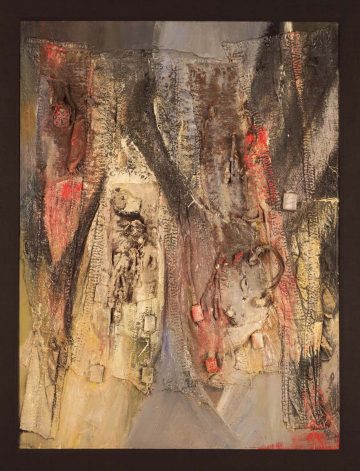 Merton D. Simpson was an Abstract Expressionist painter, collector and art dealer. Stricken with diphtheria as a child, Merton Simpson developed a passion for sketching and drawing, as well as the saxophone. After being recognized in the 1940s by an influential local artist named William Halsley, Simpson took a more serious interest in abstraction.

The first African American to win a fellowship grant from the Charleston Scientific and Cultural Education fund, Merton Simpson left Charleston for New York City in 1949. In 1951 Simpson took a three year commission with the Air Force as a portraitist where he would end up painting Dwight Eisenhower’s portrait. While enrolled at NYU, Simpson came into contact with some of the most prominent African American artists at the time, such as Hale Woodruff, his professor and mentor. He joined the Spiral Group, a Harlem-based artist’s collective focused on the struggle for black freedom, founded by Hale Woodruff, amongst others. Simpson’s paintings took on a significantly more political tone. His acclaimed Confrontations series depicted a clash between police and Harlem residents in 1964. Merton Simpson’s works would go on to be displayed at prestigious New York institutions such as the Metropolitan Museum of Art, the Krasner Gallery and the Guggenheim Museum.

Despite his talent as a painter, Merton Simpson is best known for his esteemed career as an art collector and dealer. He began dealing in African art because he “was so taken with the … forms,” he once recounted in a 1968 interview for the Smithsonian. Opened in 1954, the Merton D. Simpson Gallery of African, Oceanic and Contemporary Art was one of the country’s first galleries owned by an African American. His collection of African tribal art is widely regarded as one of the finest in the world.