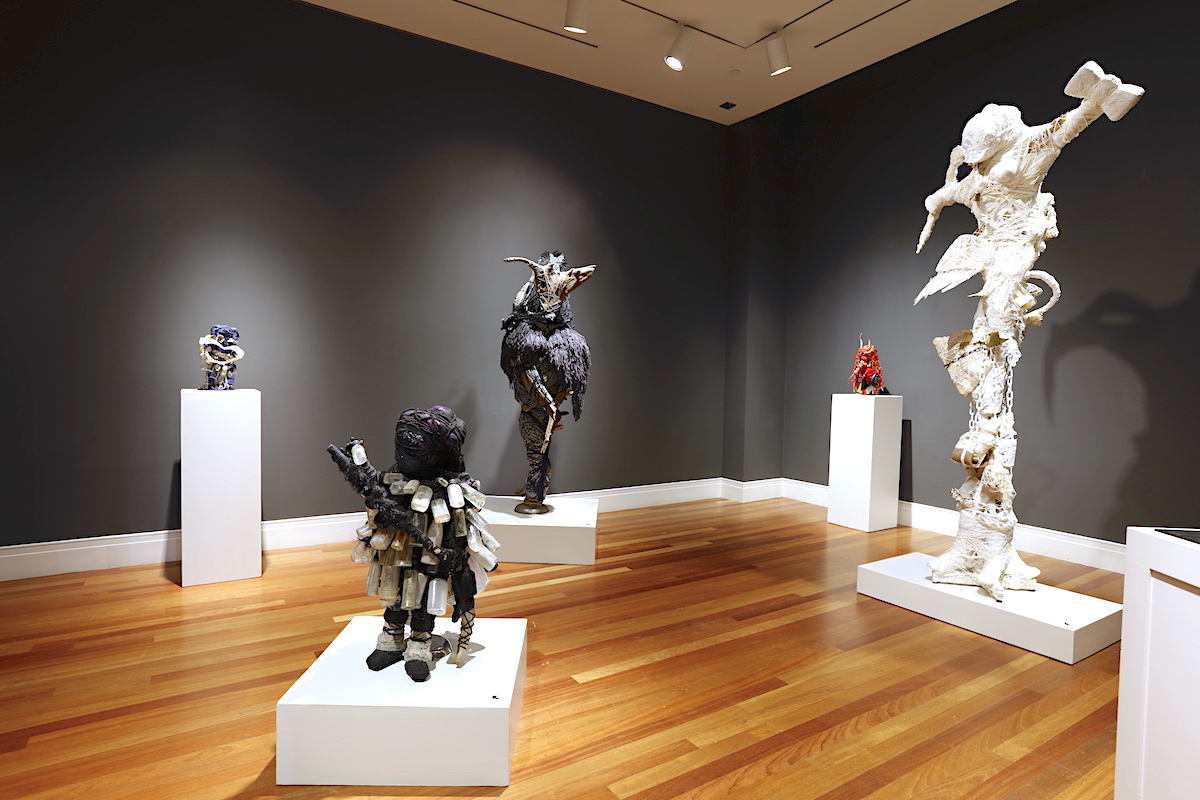 Kristin Meyers is a Calabrian-American interdisciplinary artist who uses drawing, installation, assemblage, and sculpture to explore systems of energy and spirituality. She has exhibited in the U.S. and internationally in spaces including Arte Americas, Xavier University, CAC New Orleans and, of course, the Ogden Museum of Southern Art. She has been awarded residencies at AIR Vallauris, Joan Mitchell Center and Lorenzo Di Medici. Raised in Chicago and New York City, Meyers studied at Parsons School of Design and The School of the Art Institute of Chicago. She has executed public installations in Rome, Italy and Vallauris, France. Currently, she lives and works in New Orleans (for over 25 years), as well as Brookhaven, MS and Miami, FL.

Meyers’ predominant studio practice involves the wrapping and binding of found objects into figurative sculptures. Her practice is intuitive and process-driven. It involves the collecting of materials based on perceived energy – allowing those energies to combine through a technique she calls “fermentation” – and the free-form intuitive process of building abstracted figures that express those energies. Her process often begins by searching for objects based on a concept, emotion or abstracted idea. It can also begin with a single object expressing an energy which she wants to follow and explore. She chooses these objects based on her perception of their energies, looking for evidence of imprints or human engagement. Materials are then collected to support that objective, and are packed together in bundles, sealed and allowed to “ferment.” In the fermentation process, the objects are doing the work. Their energies meld, and they also physically react to one another – creating patinas, changing color, or getting stuck together. In this way, she follows the materials before she follows her hands.

Once enough time has passed that Meyers feels the materials have “gotten to know each other,” she opens the bundles and begins the construction of a figurative form. Her figures are built without armature, and yet they are sturdy and well-balanced. Meyers’ attributes her ability to intuitively create such balanced objects without an internal support structure to her youthful experiences as a dancer and gymnast – understanding the potential and limitations of the human form.

Meyers traces her handwork to familial traditions in Calabria – traditional silk production, woven fence building, and the braiding of both hair and ceremonial bread. She sees her own process of wrapping and binding of objects together as an extension of her great-grandmother’s hand movements as she twisted the silk into thread, of her grandfather’s handwork as he bound sticks together to make garden fences, or of her grandmother’s hands as she braided the children’s hair or braided a traditional Easter bread called Panaro. In this way, she is honoring her ancestral traditions through a very personal and contemporary art practice.

Narrative is a consistent driving force in the work of Kristin Meyers. Each sculptural form is a fully developed character, and figures are often built in series which she calls “families.” Not only is each sculpture a character, but that character tells a story, expressing an idea, emotion or belief. The narrative drive in Meyers’ process is so complete that even the unseen or hidden parts of the figure support the endeavor.

Take for example, Water Tabulator. This sculpture began in Meyers’ concern for the environmental issues around water. Meyers took a kayak to the estuary of the Mississippi River – a place sacred to her, where river meets the sea and fresh and salt waters swirl together. On the hunt for materials, she found a large piece of cypress driftwood. “I knew immediately that I had found his head,” she said. In the driftwood she envisioned a horned face with a wide staring eye. He would become a guardian of the waters in her work. This singular object guided her search for support materials and drove the resulting narrative. Another trip to the Barracks docks in New Orleans produced more driftwood, collected while mourning the death of a friend who was deeply connected to the river and the wetland landscape of the region. An estate sale in Grand Isle produced cypress knees and shrimp nets.

After the objects fermented, Meyers decides to use a spiral building technique inspired by the swirling waters of the estuary. Following the materials and following her own hands, she begins to build the figure. Hidden inside are delicate ceramic eggs, little packets of life like the buried eggs of a turtle. There are barnacles included, and well-worn nets used by people who drew their sustenance from the waters. In the artist’s mind, these energies combine – the eggs, the cypress, the labor of the people, the memory of a friend, her own meditations on the river – to give life to an archetypal guardian of the water. She knows that Earth’s water is a finite resource, and she imagines that every raindrop has been counted. She names the figure Water Tabulator.

Water Tabulator is not unique in her body of work in its depth of narrative. With each work of sculpture, Meyers brings the full force of her passion, intellect and ability. Drawing from a lifetime of research into the spiritual belief systems of various cultures, she attempts to create iconic figures that express universal concerns. With her hands, she explores her own inner world and the world around her, binding meaning to objects and building narrative through form.