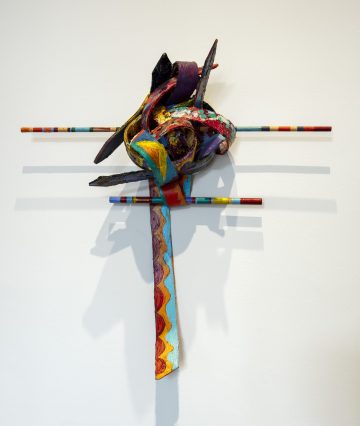 Kevin Cole is an Arkansas-born, Atlanta-based art professor and multimedia artist. A very prolific artist, Cole has produced dozens of public art commissions and thousands of smaller pieces. He was commissioned by Coca Cola to create a fifteen story tall mural for the 1996 Olympic Games in Atlanta, Georgia. Cole’s colorful mixed media pieces share a common curvilinear theme to explore black oppression and marginalization in the Southern United States. The necktie, one of the distinguishing features throughout Cole’s portfolio, represents the ongoing struggle for voting rights and its accompanying history of lynchings. To enforce extralegal voter suppression in Postbellum Arkansas, the Ku Klux Klan targeted black voters on their way to the polls. Wearing their Sunday best, which was a reflection of the pride inherent in having a political voice, many African American voters in Arkansas were hung by their own neckties in public lynchings. The endlessly looping structure reflects the repetitive pattern time echoes; social progress, for example, is not linear. The intrinsically melancholic aspect to Cole’s work is belied by its fluorescent color. African textiles inspire many of Cole’s patterns and colors, reflecting the universality of human behavior.