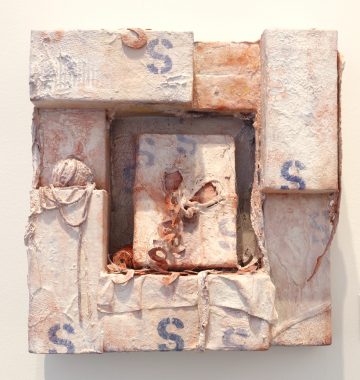 Notable for his found-object sculptures, Jeffrey Cook was a New Orleans born artist who focused on nurturing a sense of space. After graduating from Xavier University, where he studied under the legendary artist John T. Scott, Cook became a professional dancer and traveled the world. Returning to New Orleans in the mid ’80s, Cook established a studio in Central City and began to tell the tale of the neighborhood’s rise and fall with its debris and forgotten artifacts. Cook fused disparate, unrelated objects together to produce a sculpture completely distinct from its individual parts, yet obviously borne from them. Some of Cook’s assemblages resemble a human or other recognizable form while others are more indefinite. His work inherently represents certain spaces as much as the street or buildings would; they are of the place.

Following Hurricane Katrina, Cook artistically documented the city’s lowest moment through its refuse. A rusty bicycle that Cook found after the storm would become one of his most famous and enduring works. Through the Ogden Museum’s Artists and Sense of Place program, Cook became an artist-in-residence at Guste Elementary where he used photography to turn buildings and streetscapes into works of art. Cook taught the students that beauty is everywhere, and the artist’s job is to expose it.