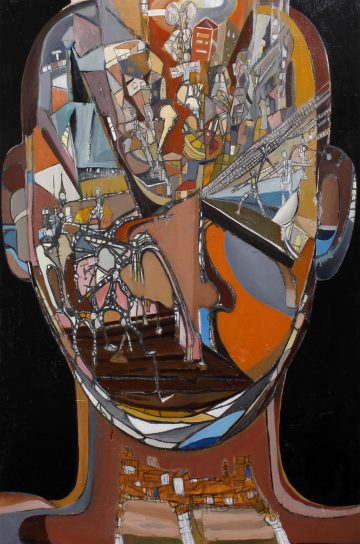 Horton Humble, A Sort of Homecoming, 2017
Oil, acrylic and pencil on board

Horton Humble is a native of New Orleans, growing up primarily in the Sixth Ward, which is popularly known today as the Faubourg Tremé. Humble was immersed at an early age in the rich cultural traditions of the city. As a young man, Humble’s artistic focus was writing, and in 2003 he left for Chicago to continue his literary studies. Around the same time, he began painting and drawing. Following the flooding of New Orleans after Hurricane Katrina, Humble returned home to help rebuild. Debris, a series of paintings on wood collected from the wreckage, was exhibited in 2007. This premiere exhibition was centered on themes of loss and water as powerful forces.

In 2008, Humble embarked on a one-year journey through Africa. Transit Urban, a series of twelve paintings using traditional African fabrics was executed along the way. Depicting the energy of the people, land and culture, each piece was drafted on site and finished during further travels across Europe and the U.S., especially in Lisbon and Chicago. Enchanted by the old mestizo city of Lisbon, he returned to live in 2012. Over the next three years, he created The Lisbon Series. In Lisbon, Humble began working in clay for the first time. His discovery of a new medium and process had a huge impact upon his painting, both opening and focusing his compositions at the same time.

After a productive period in Portugal, Humble again returned home. In the wake of Katrina, the visual art scene of his hometown had matured into a vibrant and active international community. In 2015, Humble co-founded the Level Artist Collective. His work moved more toward figuration, and his narrative became more informed by the social issues facing New Orleans and the U.S.. In 2017, Humble was a resident artist at the Joan Mitchell Center in New Orleans and in the summer of the same year, he created his first public sculpture, The Guardian, a monumental steel sculpture commissioned by The Helis Foundation for the Poydras Corridor Sculpture Exhibition. Humble currently divides his time between Lisbon and New Orleans.

Horton Humble was the subject of a solo exhibition at the Ohr-O’Keefe Museum, Mississippi in 2016, and has been included in Prizm Art Fair: Art Basel Miami, the Atlanta Contemporary Biennial, Luciano´s Benetton Imago Mundi Collection in Italy, as well as exhibitions in galleries and university museums across the city of New Orleans.