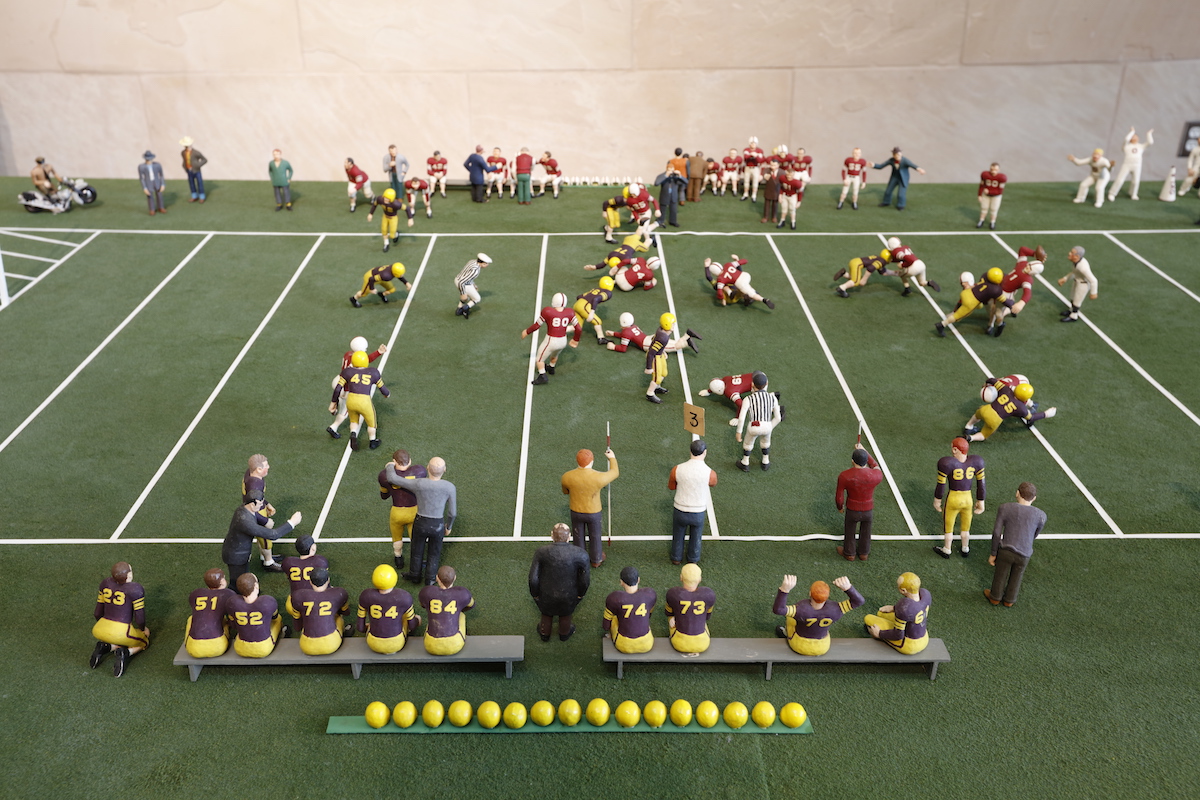 Included in the Ogden Museum of Southern Art’s permanent collection is this sculpture titled LSU vs. Oklahoma, 1950. This mixed media sculpture consists of 96 intricately carved figurines in balsa wood, spread over a 5’x8’ football field. The piece is a creation of Bennie Day, a resident of Baton Rouge, Louisiana who worked as a draftsman for Esso Laboratories. He was a lifelong LSU fan, attending games as a small boy with his father. His passion for LSU athletics continued throughout his adult years until his death in 1995.

The 1950 Sugar Bowl, played in Tulane Stadium on January 2nd, pitted Oklahoma against a football squad labeled the “Cinderella Team” – namely LSU. LSU had lost a few games that season, but had beaten three conference champions. Tulane was the Southeastern Conference Champion, but LSU beat them in their last regular season game.

In the piece, LSU tackle Ray Collins has Oklahoma Sooner quarterback Darrell Royal in a bear hug. Included in the moment in time, gracing the sidelines, are the LSU and Oklahoma football teams, coaches, referees, cheerleaders, a man taking a swig from a beer bottle, a peanut vendor, a motorcycle cop, the “chain gang” and a man in a business suit clutching the hand of a small boy. Football equipment dots the sidelines as well, including helmets, benches, cheerleaders’ megaphones, a water bucket and goalposts. “Mike the Tiger” stands in his cage near the LSU cheerleaders. An injured player is being carried to the locker room in the arms of his two teammates.

LSU vs. Oklahoma, 1950, took Day over three years to complete, putting in about ten hours of work into each wooden miniature.

In an interview in 1988, Day said, “What I was trying to capture was life … like if you snapped a photograph … I used to say if you weren’t in Tiger Stadium on Saturday night, you weren’t with it.”

LSU vs. Oklahoma, 1950 is a part of the Ogden Museum of Southern Art’s permanent collection, a gift to the Museum from the Day family.