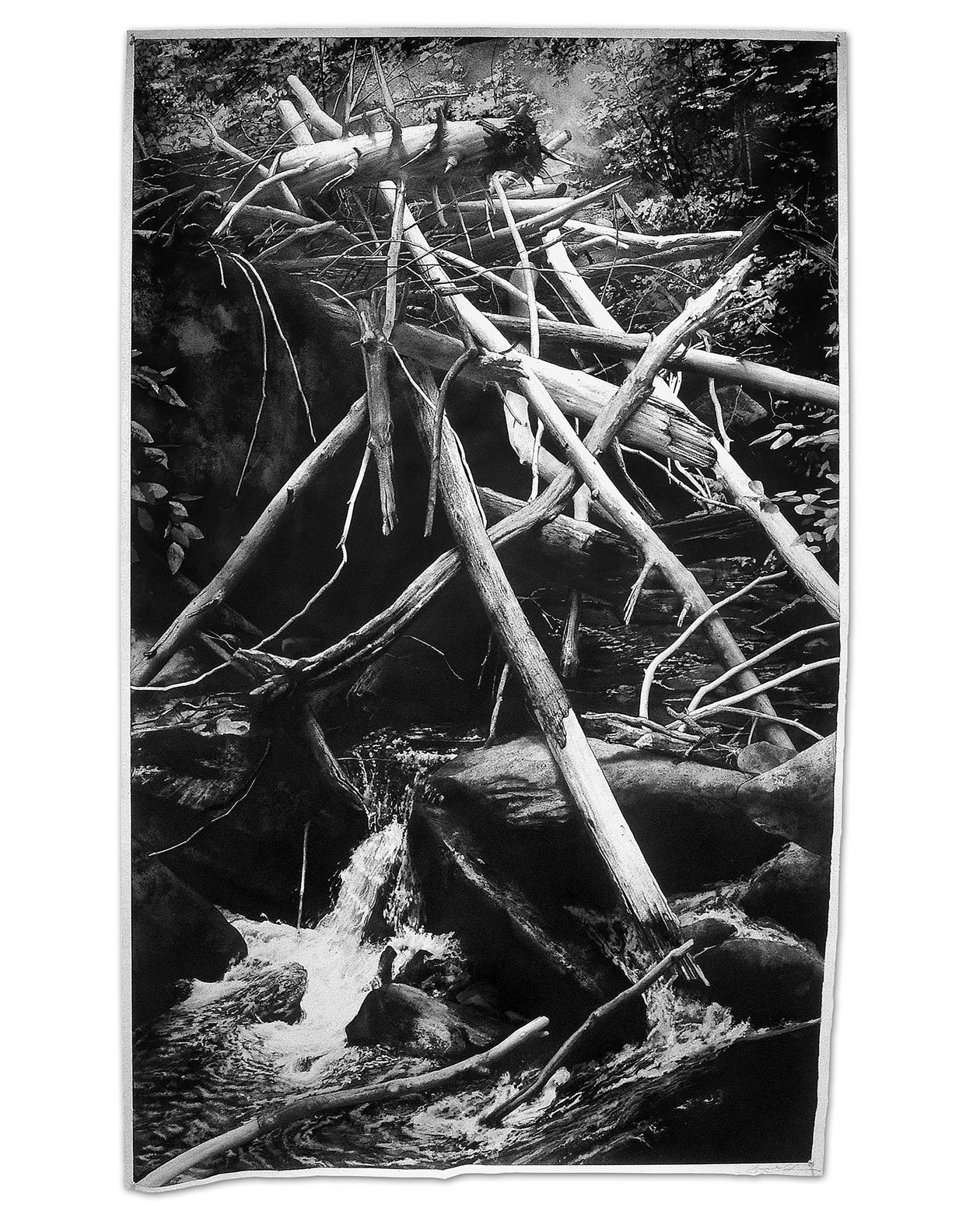 Gregory B. Saunders is one of the most accomplished artists working today in the medium of powdered graphite. A master of contemporary realism, Saunders maintains a holistic studio practice in Pensacola, Florida that joins his primary medium of powdered graphite with painting, writing, carving and assemblage to explore themes related to landscape, the human figure, personal narrative and regional identity.

Born in 1952 in Cold Spring, Kentucky, Saunders was raised in what he describes as “a shockingly small house with no running water” on a small isolated farm. The sixth of eight children born to an Irish Appalachian father and mother of Ukrainian heritage – Saunders’ childhood was both difficult and glorious. When not in school, Saunders spent his days hunting, fishing, gathering wild foods and farming a small garden with his family. Showing an early interest in art, Saunders began taking art classes in high school after the family moved to Newport, Kentucky in 1965. He entered Morehead State University on scholarship, graduating in 1974 with a Bachelor of Fine Arts. The day after graduation, he was sharpening a pencil when the graphite dust spilled onto a sheet of paper. Rubbing it into the paper with his fingers, a lifelong relationship with the medium was born.

Gregory B. Saunders’ process in powdered graphite was developed through years of experimentation and innovation. It is a process both additive and reductive, and involves drawing, brushing, masking, mapping, scraping and sanding. Every composition begins with a contour drawing, and is developed through many hours of trapping graphite powder between layers of acrylic spray to create complicated values in grayscale. He uses a filet knife to cut the paper for each drawing, creating irregular edges that often inform the final composition. Scale is a conscious conceptual decision – creating large works that can’t be regarded as preparatory drawings for another medium, but must be viewed on equal footing with paintings and sculpture.

After leaving Kentucky for Detroit in 1974, Saunders spent time living in Memphis, Nashville, Cincinnati and Greenville, South Carolina before settling in Pensacola in 1988. Everything about the landscape of Northern Florida was different than his home of Kentucky. He viewed this new environment of the Gulf Coast as exotic, and it became the primary subject of his mature work. An avid fisherman since childhood, fishing throughout the Gulf South and Caribbean is a major part of the artist’s life – and many of his landscapes memorialize fishing trips. Yet whether his works depict the dunes of the Emerald Coast or the bayous of South Louisiana, they are depicted through the hands of a Kentucky transplant, an artist who physically left Appalachia, but never spiritually.

The human figure is also a major element in the work of Gregory B. Saunders, from simple portraiture of friends and family to the allegorical works of his Siren Series. Often, his graphite portraits are incorporated into beautifully crafted sculptural constructions. These may include wood carvings and found objects. Many works are supported by short stories or poems. He maintains an abstract sculptural practice that he describes as “more drawing than my drawings.” Even his house is filled with cabinets, tables and architectural details created by the artist. Taken together, these works of various media represent a holistic practice that blurs the line between art and life. In the world of Gregory B. Saunders, art is life.

Leaving Appalachia: The Art of Gregory B. Saunders is the first major museum survey of the artist’s career, bringing forth rarely-seen works from private and public collections to show the depth and breadth of the artist’s practice. This exhibition illustrates a life spent in contemplation of process and place. It is a meditation on personal narrative and regional identity. These works tell the story of an artist who chose art as a way of life, who believes in the power of visual storytelling and who seeks to understand the world around him through drawing. “These works are more than just marks on paper,” he explains. “This is my life laid bare.”

Mention graphite drawing and one usually thinks of pencil lines on paper where values are achieved by varying line weight and darkness. However, I have created a way to trap layers of powdered graphite between layers of acrylic spray enabling me to develop images with a broad range of values based on mass rather than line. It is this value range and surface that give my work its photographic quality.

My pieces begin as extremely detailed contour drawings based on an image relating to a specific series. It is crucial that this contour drawing be precisely rendered, as during the drawing process much of the image will be covered with masking material for protective purposes.

Once the detailed contour drawing is completed, any area to be kept pure white is then protected with masking. This includes the irregular edges which form the borders of my drawings. These edges are important as they have both a conceptual and compositional tie to the image within.

Having protected all the white areas, I now select a single shape within the composition; This may be as simple as a single limb or rock, or as complex as a human face or cloud formation. Using tape and paper masks, I isolate this shape from the surrounding composition to protect the contour image from graphite dust and acrylic overspray. My hands, rags, plastic bags and brushes are now employed to apply the powdered graphite to the paper, fixing it into place with layers of acrylic spray. To achieve a variety of textures I will work back into the confined shape with handmade scrapers, steel wool and lacquer thinner refining the surface and implied texture as I go. Once the desired surface has been achieved, the exposed shape is sealed under a final coat of acrylic, covered with a protective mask and I move on to the next shape. The entire piece is thus created, one segment at a time, like a hidden jigsaw puzzle.

When all of the shapes have been filled in the masks are removed revealing the final image. Any last minute adjustments to value and surface are now added. With the image complete all that remains is removing the protective edges. This last step is a very exciting one, usually calling for a celebratory bourbon, for only now do I get to see the piece in its completed form.

My finished drawings are the result of a long and laborious process. There have been pieces where I have spent as much as fifteen hours masking a single complex shape. But this elaborate masking system allows me the freedom to be very expressive within the confines of any given shape. My works are not an intuitive response to the image, but rather an assemblage of specific shapes and values to create a unified whole.

Gregory B. Saunders is a visual artist whose work has been exhibited internationally and is in the collection of several museums including Ogden Museum of Art, New Orleans Museum of Art, and The Goddard Center. Working in powdered graphite on rag paper, Saunders creates large drawings with photo-like clarity and detail. These drawings are done in a series and exhibited along with his sculptures, which are created in an abstract vein as a counterpoint to the graphite work.

In addition to his extensive exhibition record, Greg has created original art for Pensacola Opera’s season programs, designed a set for Loveland Opera Theater, as well exhibitions for The Country Music Hall of Fame. Greg currently lives in Pensacola, Florida, where teaches drawing at the University of West Florida.