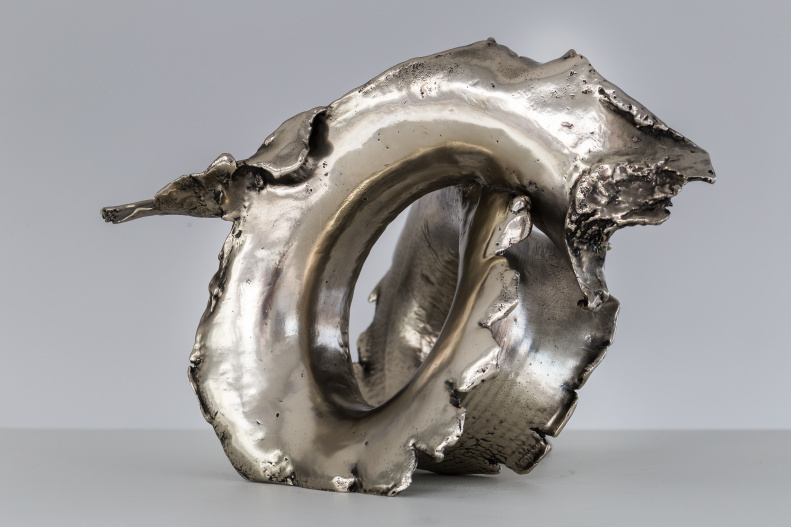 Since the 1960s, Lynda Benglis has employed a variety of materials including beeswax, latex, vaporized metals and ceramic to explore the physicality of form. She has worked as a sculptor, painter and filmmaker in pursuit of a codified duality, seeking to expose the process of creation in its realization of finality. Her work is fluid, yet inert; organic, yet fabricated; sensual, yet rigid. The work invokes a corporeal reckoning within the viewer, exposing the preconceived constructs that exist within us.

Benglis’s ELEPHANT NECKLACE series is a body of hand-wrought, glazed ceramic curls that the artist correlates with the blown-out tires of tractor trailer transports strewn on the sides of countless American highways. “ELEPHANT NECKLACES are artifacts that I imagine as extrusions of life,” she says. “They could be described as fragments from mammoths’ trunks of an ancient time. Or perhaps they resemble strange umbilical cords cut after the expulsion from the Garden of Eden.” The series evokes the biological remnants of a mysterious past with the tactile familiarity of a modern freeway. We perceive the work in stasis while it exudes movement, as we comprehend ourselves as single bodies while our infinite cells flow and change. This duality permeates the ELEPHANT NECKLACE series in its suspension of fluidity, immediateness of an imagined origin and elegance in hewn form.

Lynda Benglis was born in Lake Charles, Louisiana in 1941. She earned a B.F.A. in 1964 from Newcomb College in New Orleans, where she studied ceramics and painting, and later went on to study painting at the Brooklyn Museum Art School. Benglis resides in New York, Santa Fe and Ahmedabad, India. She is the recipient of a Guggenheim Fellowship and two National Endowment for the Arts grants, among other commendations. Benglis’s work is in extensive public collections, including the Guggenheim, New York; Los Angeles County Museum of Art; Museum of Modern Art, New York; the National Gallery of Victoria, Melbourne, Australia; San Francisco Museum of Modern Art; Walker Art Center, Minneapolis; and the Whitney Museum of American Art.