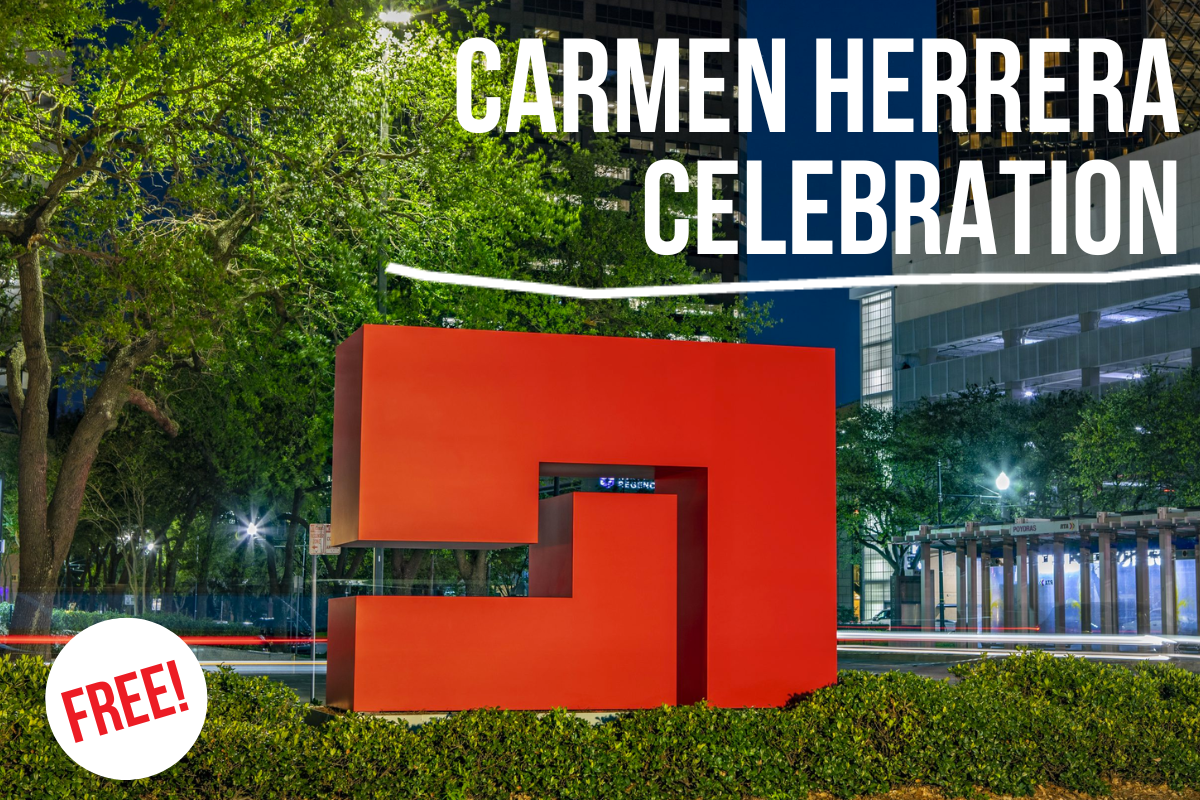 The evening will feature a special screening of “THE 100 YEARS SHOW,” and a celebration of the recent acquisition of Carmen Herrera’s Untitled Estructura (Red) located on Poydras Street and Loyola Avenue, a part of the Poydras Corridor Sculpture Exhibition presented by The Helis Foundation.

The FREE event will also include live music by Matthew Shilling Latin Jazz Quartet presented in collaboration with Cuba NOLA Arts Collective, mojitos for purchase and food for purchase from Que Pasta!

Free to attend, but advanced registration is requested.  Event will take place at Ogden Museum of  Southern Art at 925 Camp Street.

Cuban-American Carmen Herrera was a pioneering abstract painter in the ’40s and ’50s, but only recently found the recognition that eluded her for most of her career. Born in Havana, Cuba in 1915, she moved between France and Cuba throughout the 1930s and 1940s before settling in New York in 1954. Her work is in numerous public and private collections including Museum of Modern Art, NY; Whitney Museum of American Art, NY; Metropolitan Museum of Art, NY; Hirschhorn Museum, Washington DC; Smithsonian American Art Museum, Washington DC; Walker Art Center, MN; Museum of Fine Arts Boston, MA; Crystal Bridges Museum of Art, AR; Tate Collection, London.

Core to Carmen Herrera’s work is a drive for formal simplicity and a striking sense of colour. Herrera began the sketches and preparations for her Estructuras (Structures) in the late 1960s, around the same time that key Minimalism sculptors including Carl Andre, Donald Judd and Barnett Newman were early in their exploration of the medium. Of the shift from painting to sculpture Herrera has noted: “It became clear to me that the linear elements in my work required a hard surface to integrate structurally the ‘hard edges’.” These works marked an important moment in Herrera’s career, wherein the forms move from drawing, to painting, to sculpture, and her meticulous sharp edges are physically manifested. Her first major exhibition of outdoor sculptures took place in City Hall Park, New York, NY, organized by Public Art Fund in 2019 and traveled to Buffalo Bayou Park, Houston in 2020.

Poydras Corridor Sculpture Exhibition, presented by The Helis Foundation is the South’s leading rotating public sculpture exhibition. The Helis Foundation, Ogden Museum of Southern Art, and The City of New Orleans Department of Parks and Parkways work together to bring interesting and inspiring sculptures to the residents and visitors of New Orleans. Poydras Corridor Sculpture Exhibition has installed over 40 sculptures by artists of local and international acclaim on Poydras Street between Convention Center Boulevard and South Galvez.

Matthew Shilling was born in Denver Colorado where he took an interest in jazz saxophone at a young age. He continued to study at the University of North Texas and under Ron Miles in Denver. He then moved to Barcelona Spain where he played with acclaimed international musicians developing a love for jazz fusion including with Brazilian, African and Cuban music and musicians. After returning to the States he was quickly called to New Orleans where he soon took to the stage with Kermit Ruffins, Delfeayo Marsalis, Bill Summers, Alexey Martí (opening for Chucho Valdez) and many many others, all while being invited to complete his Master’s degree in Jazz Studies at The University of New Orleans. Shilling is continually learning from a wide variety of genres and, of course, New Orleans traditional music. Shilling will present music with international artists in his Cuban-American Latin Jazz band.

The Library of Congress, National Archives and Records Administration, National Endowment for the Humanities, National Gallery of Art, National Park Service, Smithsonian Institution and United States Holocaust Memorial Museum join in paying tribute to the generations of Hispanic Americans who have positively influenced and enriched our nation and society. It runs from September 15 through October 15.

This special event is made possible with support from The Helis Foundation⁣.