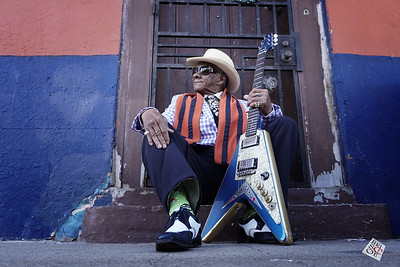 Born in McComb, Mississippi in 1940, Fread E. Martin grew up playing alongside his blues guitar picking father Jessie James Martin, then rode the rails to New Orleans during the early 1950s where he crossed paths with itinerant South Louisiana blues men such as “Polka-Dot” Slim and “Boogie” Bill Webb, whose unique country-cum-urban styles would influence his own. Honing his guitar chops at notorious joints like the Bucket of Blood (which he later immortalized in song), he jammed and gigged with Bo Diddley and John Lee Hooker, and also played bass for Freddie King during one of the guitarist’s stints in New Orleans. People began comparing the two musicians’ styles, hence Martin’s nom-de-plume. While well-vested in a variety of styles, nowadays, Little Freddie sounds a lot more like his cousin Lightnin’ Hopkins – albeit after a three day corn liquor bender. Nevertheless, the King sobriquet is fitting, as Freddie is undeniably the monarch of the Crescent City Blues scene.