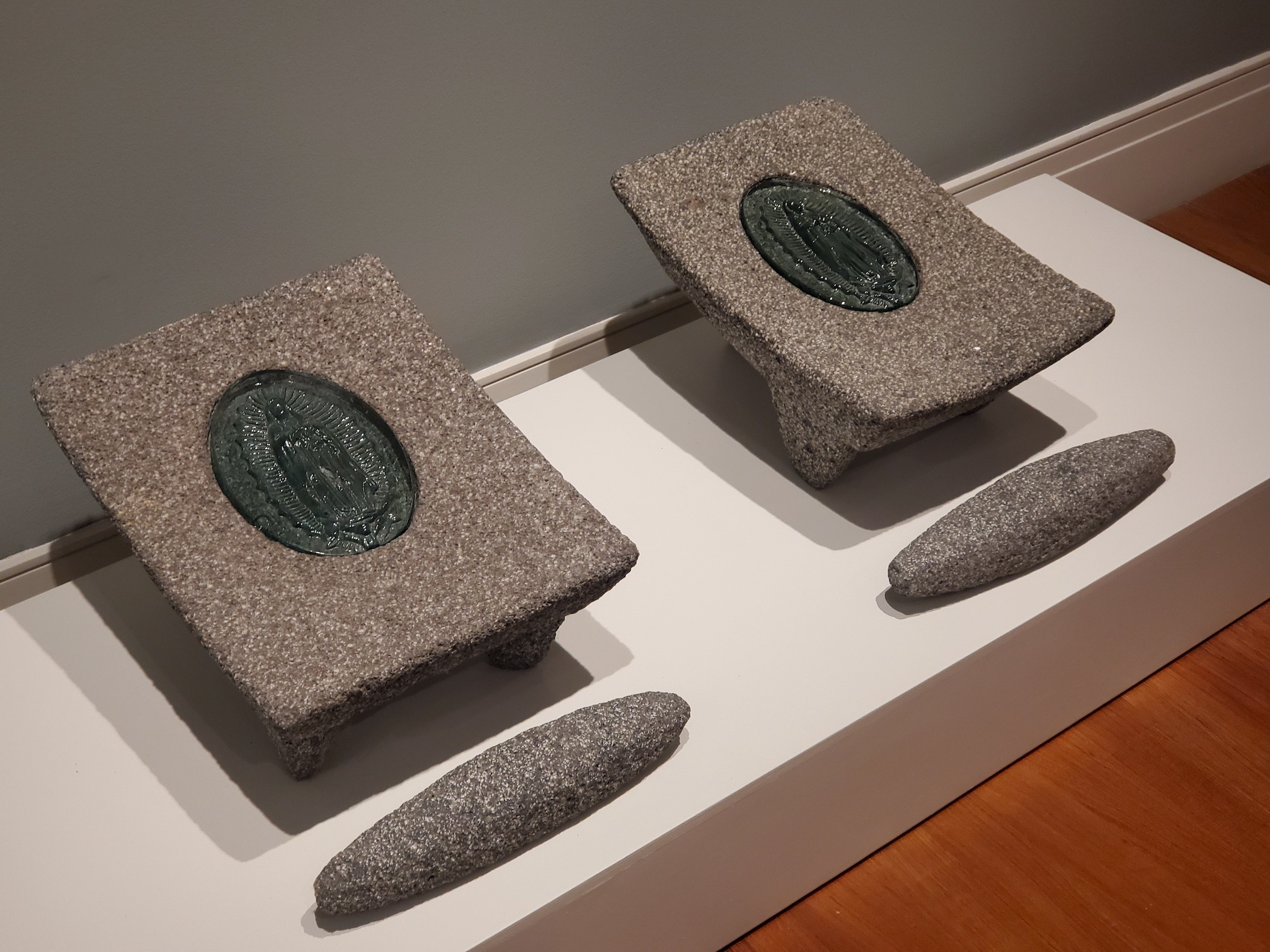 Visit the O Blog Thursday at noon to watch a Curated Conversation with Entwined artist, Susan Plum, and Curator of the Collection, Bradley Sumrall.

Susan Plum is a multidisciplinary artist currently living and working in Houston, Texas – the city of her birth. Born in 1944, Plum was raised in Mexico City. Painting was the primary medium of her early practice, and she was heavily influenced by Magical Realism and Surrealism in Mexican Art. Plum attended the University of Arizona, Tucson (1963); the University of the Americas, Mexico City (1965); and the Pilchuck Glass School, Stanwood, Washington (1986-87, 1994). She has taught at the Pilchuck Glass School and the Penland School of Crafts, North Carolina. She has studied with shamans in Mexico, and a Pundit in South India, deepening her personal expression and understanding of ritual. She creates bodies of work that reflect her environment which include: cosmology, quantum physics, indigenous beliefs of co-existing with nature, and humanitarian concerns. She believes that art can be a vehicle for healing, transformation and social activism.

Luz y Solidaridad is a sculptural installation that addresses the disappearance and murder of young women near the US border around Juarez – a femicide that some estimate to be in the thousands since 1993. Fueled by the perceived lack of inaction by authorities and inspired by a community of mothers who have lost their daughters, Plum created Luz y Solidaridad (Light and Solidarity) – a sculptural installation that is often connected to a ritual cleansing performance.

This iteration of Luz y Solidaridad consists of three symbolic elements: the escoba (broom), the nudo (knot), and the metate (grinding stone). The broom is traditionally a feminine symbol, one that is tied both symbolically and literally to the act of cleansing. Throughout the world, there are rituals that revolve around the broom. “In Burma, women come to the temples dressed in beautiful traditional saris, carrying small traditional brooms in order to sweep the day’s “energy” away at sunset. In the morning temples are opened up to the public, fresh and “cleansed” of the previous day’s energy,” explains Plum. “In Mexico, there is a daily ritual of sweeping outside one’s home in order to cleanse and begin the day. In this piece, the hanging brooms are tied in a knot to symbolize both the cutting off or blocking of the feminine as well as to remind us of the cosmic knot or Buddhist knot.” Plum uses the binding of the broom fibers and the knot to illustrate both blockage and connectivity.

With the metates, she also symbolically uses the object to illustrate both the erasure of the past with connectivity to the present. “These metates speak to the lineage of the Virgin of Guadalupe,” she explains. “Because before Guadalupe, there was the Toltec, Tonāntzin; the Aztec, Coatlicue; and the Mayan, IxChel. She had a long and geographically extensive lineage as the goddess before they made her the Virgin of Guadalupe. The metate which also dates back to the Pre-Columbian era, was used for grinding corn, peppers, etc. I placed this beautiful image of the Virgin of Guadalupe, (cast in glass) into the center of the metates to honor the ancient origins of the Goddess. I drew on the ancient and spiritual roots of Mexico in creating all the work for the installation.”

Although this work is firmly tied to the humanitarian crisis in Ciudad de Juarez, Plum’s work on this subject made her aware of a global crisis of violence against women. This work now stands to bring healing and awareness to this critical issue facing women worldwide.

About Entwined: Ritual Wrapping and Binding in Contemporary Southern Art

“I follow my hands, and they often reveal the answers to the questions that I am asking myself while I explore the material I am working with.” – Sonya Yong James

This exhibition explores how wrapping and binding are used in the work of eleven contemporary artists from the American South. It also explores the motivations, inspirations, and meaning behind the acts of wrapping and binding objects through the varied perspectives of this diverse group.

The act of wrapping objects and binding things together is as ancient as mankind itself. Weaving is at least 12,000 years old (recent discoveries suggest possibly 27,000), and the world’s oldest sewing needle (made of bird bone possibly by Denisovans) dates back to approximately 50,000 years ago. While it is an ancient and very human act, perhaps the inspiration arose from observing nature. Spiders bind filaments together to form a web, and wrap their prey in silk. Vines wrap and cling for support and movement. Birds build nests and bagworms build homes through binding objects together. Each and every one of us begins life bound within the womb, one life entwined with another. Perhaps that is part of the primal urge to wrap objects: to protect them, hide them, contain them. Wrapping can be a preservative endeavor, like the mummy’s quest for immortality. It can be a violent act, like the coil of the snake or the chains of human bondage. It can be an act of solidarity and devotion, as with the hand-fasting rituals of marriage. Every wrapped package or bound bundle contains a secret – a hidden thing, the unknown – and activates the very human emotions of curiosity or fear.

From Native American sacred medicine bundles to the Jewish laying of tefillin, wrapping and binding have been used as a symbolic device by humans throughout history. Both the ritual act and the act of creating art are ways of putting concrete reality to abstract ideas. Drawing inspiration from the traditions of various cultures – Haitian Voudou, Appalachian broom-making, Calabrian silk production, Peruvian rope coiling, Congo Nkisi – the contemporary artists in this exhibition engage wrapping and binding as both symbolic aesthetic device, and often as a ritual practice within their work.

Each artist in this exhibition approaches the simple acts of wrapping and binding from a unique perspective. Some are involved in the haptic absorption of repetitive handwork – a sort of ritual meditation on texture and rhythm. Others are exploring the symbolic power of the physical act – weaving narratives through form, image and materials. This exhibition contains a feast of texture and a vast range of materials – clay, fabric, rope, egg tempera, driftwood, loofah, antler, bone, wire, coffee, ashes, teeth, yarn, wool, chalk and a plethora of found objects. Through wrapping, painting, weaving, coiling, drawing, or knotting, each artist binds their own unique and thoroughly contemporary vision to an ancient, universal and very human practice.

This exhibition is curated by Bradley Sumrall, Ogden Museum Curator of the Collection.