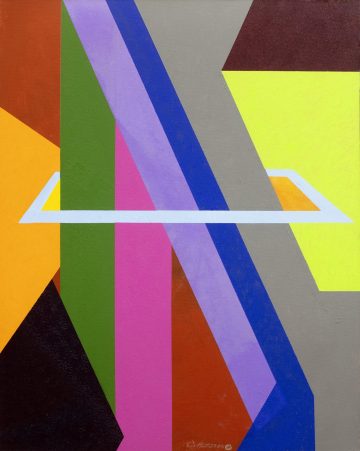 Eugene Martin is a visual artist best known for his imaginative, complex mixed media collages, pen and ink drawings and paintings. Eugene was born in Washington, D.C. in 1938. His father was a traveling jazz musician and after Eugene’s mother died in 1942, he and his brother were placed in foster care. As a child, Eugene ran away on several occasions and at age six was placed in reform school. He spent the remainder of his childhood on a farm in Clarksburg, Maryland with his foster parents. Wile there, he drew realistic portraits and nature scenes, and played upright bass, thunder bass and slide trombone in the local rhythm and blues band The Nu-tones. Upon graduation from high school, he briefly joined the Navy.

Martin enrolled in the prestigious Corcoran School of Art from 1960 to 1963. Despite having studied the European masters at a traditional art school, Martin became a full-time professional artist who eschewed traditional styles or categorizations as a true individualist. The stereotypical “starving artist”; Martin spent most of the 1960s and ‘70s in and out of homelessness and various group homes in Washington, D.C.

Eugene Martin’s work is derived from both cultural and personal references, incorporating a gentle humor into his introspective works. The organic forms and geometric shapes within his art are often whimsical allusions to animal, machine and structural imagery. His vibrant abstract works are filled with distinctive hues, contrasting broad strokes of intense color with finely worked areas of pastel shades. Martin’s work has often been described as “beyond category.” In 1996, Eugene Martin and his wife, Suzanne Redericq, moved to Lafayette, Louisiana where he continued to create art until his death. Eugene’s works of art can be found in numerous private art collections throughout the world and in many permanent collections of many prominent museums.