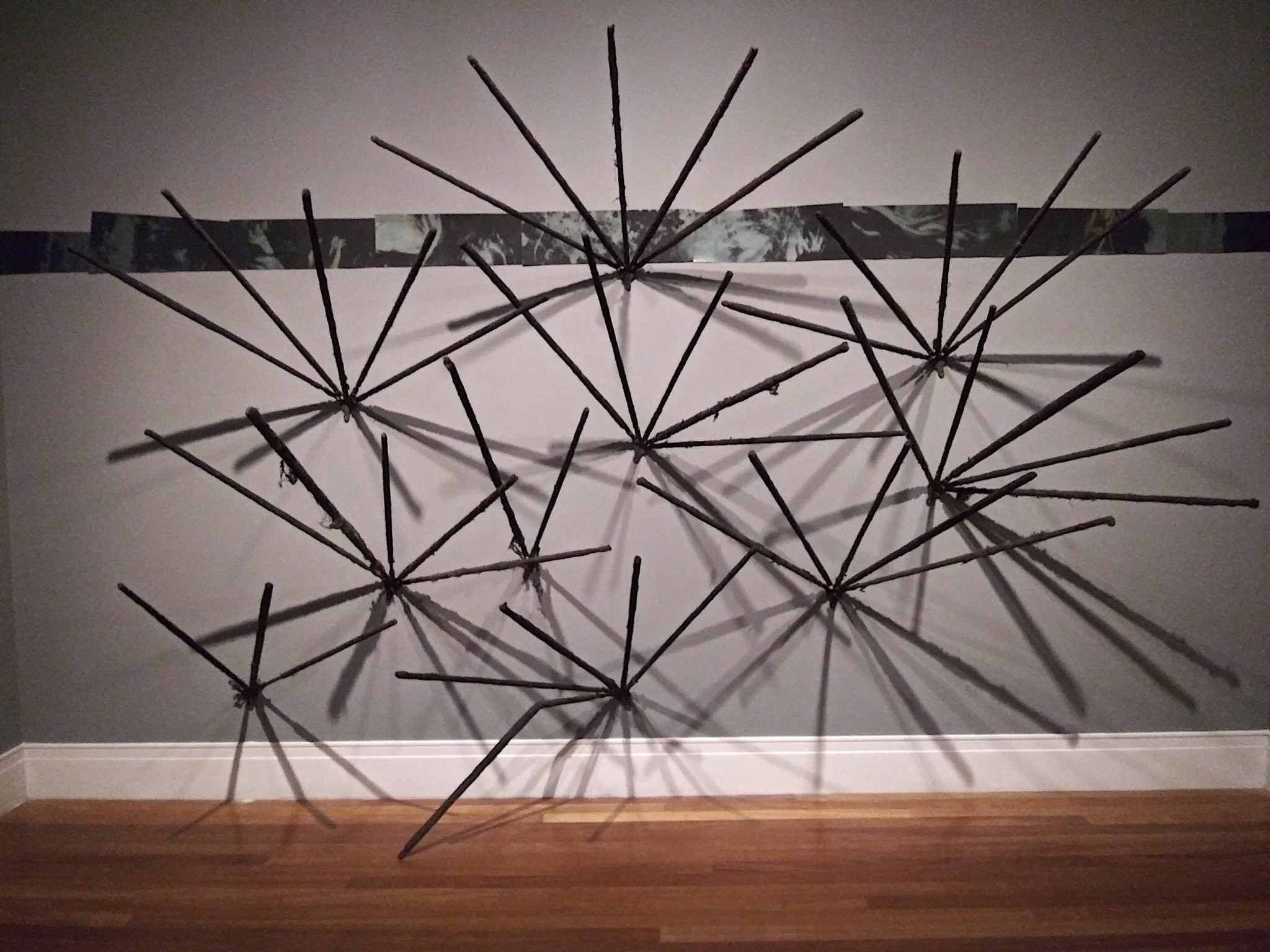 The assemblage and installation art of Elizabeth Shannon often involves giving new life and context to old objects or materials. A project’s goal defines the materials she uses, and an object’s history is often what attracts her. In Re-Seeking Horizons, she is also giving new life and context to a previous incarnation. The stick elements in this exhibition were first created in the early-1980s for a fiber arts project. She often reuses components of earlier works in new installations. In this iteration, she has added a horizon made from discarded strips of inked metal photogravure plates from the studio of Josephine Sacabo, as well as a small found black bird figure, to create new levels of narrative and composition within the work.

With Re-Seeking Horizons, Shannon has created an immersive abstracted environment, conjuring the palmetto-filled landscape of South Louisiana. The palmetto-like forms arise from antique cast iron flag holders found in her former studio, remnants of the space’s previous industrial life. Wooden dowels are wrapped and bound with painted cotton mill ends to create the abstracted fronds. The resulting surface conjures the fragility of organic life and the texture of a bandage covering a wound. A few sticks have red paint exposed, presenting as blood beneath the surface. The original installation, as well as this one, explores the fragility of our ecosystem globally, and humankinds effect on those natural systems. With this work, Shannon is addressing human stewardship of the natural environment.

The new elements of this exhibition serve a twofold purpose. With the addition of the found black bird figure, Shannon is referencing the 1968 Paul McCartney song, which used a blackbird as a symbol of empowerment and solidarity with the Civil Rights Movement. By including this symbol in the context of this installation, Shannon is engaging in the dialogue around environmental racism, highlighting the negative effects of environmental injustices within a racialized context. Through the addition of a horizon line, Shannon has injected her own optimism and hope for the future. “I am looking upon the horizon for a sign of resilience – needing to be ever hopeful, enlightened. I recall the words of Henry David Thoreau in his 1854 classic, Walden, or Life in the Woods. ‘We need the tonic of the wilderness. We can never get enough of nature.’”

Elizabeth Shannon is a mixed-media and installation artist who has been active in the New Orleans art dialogue for over 50 years. Born in 1948 in Morgan City, Louisiana, Shannon grew up on the Atchafalaya River. Surrounded by the wild and lush beauty of the Wetlands, Shannon was witness to the vital activity of the seafood and oil industries. Her work often addresses the codependent relationship between local industry and the ecosystem. Much of her practice engages the medium of assemblage and installation utilizing found objects to comment on social, ecological, political and philosophical concerns.

In 1966, Shannon was accepted into a program which allowed her to study at New Orleans three Catholic institutions: St. Mary’s Dominican College, Loyola University and Xavier University. In 1969, she engaged in an Independent Study program at the University of the Americas in Mexico City. She graduated in 1970 from the Catholic Consortium program with a Bachelor of Arts in Art and Philosophy, having studied under influential artists such as Angela Gregory, Sue Ferguson Gussow and John T. Scott. Her work has been exhibited widely throughout the United States, and is in numerous private and public collections, including Ogden Museum of Southern Art, New Orleans Museum of Art, and The Frederick R. Weisman Art Foundation in Los Angeles.