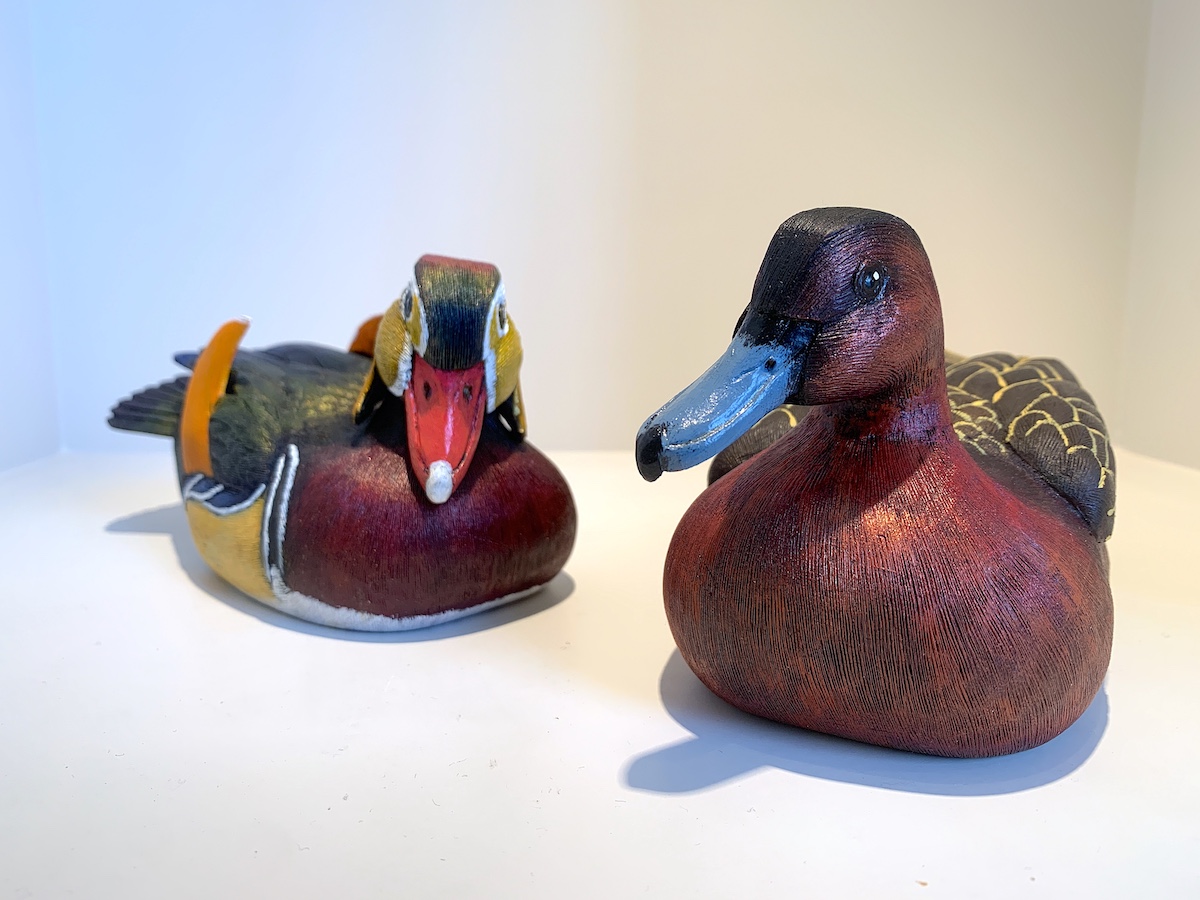 South Louisiana-native woodcarver John Parfait carves a variety of wildfowl and small animals using swamp tupelo found in coastal Louisiana. Best known for his carvings of mallards and wood ducks, John has used his own unique woodcarving process since he began carving more than 40 years ago. His woodwork has been purchased by collectors from around the world, and some of his earliest pieces are on display in the Smithsonian Museum of the American Indian in Washington, D.C.

John uses his own stencils and a variety of carving tools to cut and shape the swamp tupelo to form. After sanding the wood to a smooth surface, John typically uses a soldering iron to create grooves in the wood, in order to give the carving a more lifelike appearance. His artistic skills and natural love of painting are revealed in the acrylic paint detail of each piece he creates.

John began experimenting with wood carving in 1975. He realized quickly that he knew next to nothing about woodcarving. In a moment of discouragement, he tossed his first pieces of woodwork in a fire. He quickly had a change of heart. After seeing the carvings partially burned, he pulled them out of the fire and said, “I can’t give up.”

In 1977, John, along with his cousin and fellow Houma woodcarver Roy Parfait, enrolled in his first woodcarving workshop in his hometown, Dulac, Louisiana. The workshop, conducted by acclaimed woodcarver Bill Crowe of the Eastern Band of the Cherokee Nation, laid the foundation for both John and Roy’s understanding of the craft. John’s interest would be further bolstered in a woodcarving workshop featuring Cherokee woodcarver and famed Hollywood set-builder Goingback (G.B.) Chiltolskey in 1979. The knowledge John gained from these two artists helped develop the process he would use on all of woodwork.

Over the years, John’s carvings have been carried by art galleries in the Smoky Mountain towns of Helen, Georgia, Gatlinburg, Tennessee and Cherokee, North Carolina. He has also taught woodcarving workshops and sold his carvings at craft shows throughout Louisiana, including the New Orleans Jazz & Heritage Festival.

In addition to painting his carvings, John enjoys painting depictions of Native American life on canvas. He is a member of the United Houma Nation, Louisiana’s largest Native American tribe. John participated in the development of the tribe’s modern charter in the 1970s and later served as a tribal council member. He and his wife Virginia recently relocated to New Orleans from Nashville, Tennessee, where they lived for 24 years. Together, they have seven children, eight grandchildren and one great-grandchild.