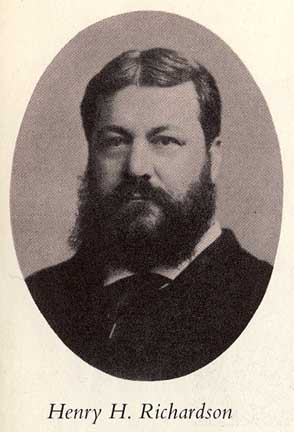 The idea of the Patrick F. Taylor Library, originally titled the Howard Memorial Library, was conceived of by Charles T. Howard, president of the Louisiana State Lottery Company in the late 19th century. Before an unexpected death in 1885, he supposedly had conversations with esteemed American architect Henry Hobson Richardson about the library’s potential design and construction. Richardson fell fatally ill a year later. Shortly prior to his death, however, he submitted a design in a competition for the commission of the Hoyt Library in East Saginaw, Michigan. Though his design was not chosen for this midwestern public library, it did indeed become the foundation of the Howard Memorial Library. Such is the beginning of this long and winding history.

After the architect’s death in 1886, Charles Howard’s daughter purchased land for the building and the construction of the significantly expanded design for the Howard Library, nearly doubling the size of the Hoyt Library, was supervised by Richardson’s successor firm, Shepley, Rutan and Coolidge.

Norcross Brothers, associated with many of Richardson’s major public projects, including Trinity Church, constructed the building in 1887 and 1888. It was reported to have been built upon 350 pilings, driven to a depth of 55 feet. Ongoing progress was closely monitored by New Orleans residents, and citizens learned when a librarian was hired from the Astor Library in New York and books were purchased in New York. A series of finishing exterior details began in December of 1888, when John Evans of the firm Evans and Toombs, of Boston, arrived with his workers to carve the designs in the stones of the library. One of the most intricately carved elements was the seal of the City of New Orleans, located over the entry door. The copper-colored marvel was described in The Library Journal in 1888:

The handsome building… was designed by the late H.H. Richardson, of Boston, a native of New Orleans. The exterior is of brown stone from the Kibbe Quarry, Massachusetts, and the room of Akron red tiles. The entrance opens into a delivery room 19 ft 8 in x 30 ft; on the right is the book room 75 x 40 ft, containing twelve alcoves… Crossing an anteroom 12 ft wide to the left of the entrance, one enters the circular reading room – 41 ft 4 in inside diameter, paneled to the height of 14 ft with quartered white oak… The contract price of the building was $98,000, without the furniture, which will raise the amount to $100,000.

Following an invitational private ceremony on the evening of March 4, 1889, the Howard Memorial Library opened to the public the next day, on Mardi Gras Day, 1889. It opened as a Louisiana reference library, with a collection of 9,000 volumes. The dedication of this building also signaled the birth of the Louisiana Historical Association (LHA), a historical society of confederate veterans who were to oversee and expand a collection of confederate relics and archives.

Howard Memorial Library’s collections, however, continuously increased, and around 1939 the Library’s collections were transferred to Tulane University. During the 1940s, the building was used during the war as a storage site for “Bundles for Britain,” then suffered extensive damage from a fire, before it was converted to a radio station operated by The Times Picayune. In the following decades, its Great Hall was gutted for office spaces, and its remaining woodwork and interior stonework was painted when a law firm assumed use of the structure.

In 1988, as the Library’s 100th anniversary approached, its reversal was halted and an important period of restoration was launched when Patrick F. Taylor and Phyllis Taylor purchased the building. They commissioned the New Orleans firm of Barron and Toups to plan and supervise the Library’s restoration. Inside, the Reading Room was restored, including the stripping and refinishing of all painted wooden surfaces, along with the related stripping of paint and the reinstallation of the fireplace in the Rotunda. All exterior stone surfaces and interior ceilings were restored and repaired. The Library was rededicated as the Patrick F. Taylor Library on June 21, 1989.

The firm Barron and Toups was retained to design a complete museum complex, including the Library’s remaining restoration and conversion to use as a museum structure. In 2002 and 2003, as construction of the related Stephen Goldring Hall evolved nearby, restoration advanced on the Taylor Library and on its annex, the Clementine Hunter Educational Wing. On August 23, 2003, Stephen Goldring Hall, phase one of Ogden Museum of Southern Art, was dedicated in a major public ceremony.

With the completion of the Taylor Library’s exterior and structural restoration, and the construction of the Clementine Hunter Education Wing, both in 2003, project funding was advanced by the awarding of a grant from the National Endowment for the Humanities in 2004. A final Library campaign was planned and prepared to launch when Hurricane Katrina hit New Orleans and the Gulf Coast on August 29, 2005. After surviving the initial stages of hurricane recovery and cultural rebuilding activities, Ogden Museum of Southern Art initiated a series of previews of the Patrick F. Taylor Library, from March 15-19, 2007.

Currently the Library is used for various events hosted by the Ogden Museum of Southern Art, such as the annual O What A Night! Gala. Occasional performances from the Museum’s weekly entertainment series, Ogden After Hours, are hosted in the space, and the Library is available to be rented as a venue space to the public.

President of the Louisiana State Lottery Company Charles T. Howard, to whom the Howard Memorial Library is eventually dedicated, dies.

Henry Hobson Richardson dies, having already submitted a design to a competition for the design of the Hoyt Public Library in East Saginaw, Michigan. His design is rejected and becomes the foundation for the Howard Memorial Library.

Howard’s daughter, Annie Turner Howard, purchases a lot for the Howard Memorial Library. Richardson’s successor firm, Shepley, Rutan and Coolidge, complete the plans for the building. Norcross Brothers, associated with many of Richardson’s major public projects, including Trinity Church, are hired to construct the library.

The Howard Memorial Library opens to the public primarily as a Louisiana reference library on Mardi Gras day. The Louisiana Historical Association (LHA), originally composed of a group of Confederate veterans dedicated to preserving relics, collections and documents from the American Civil War, forms, and Charles T. Howard’s son, Frank T. Howard, is elected president. Due to a lack of space for the LHA’s growing collection, Howard purchases a property adjacent to the library on Camp St., which is named the Howard Memorial Hall or the Howard Annex. (Today, the building is referred to as the Confederate Memorial Hall Museum.)

The LHA holds dedication ceremonies for the newly constructed Howard Memorial Hall on the anniversary of the 1815 Battle of New Orleans.

The Howard Memorial Library is given to the British War Relief Services and repurposed for World War II efforts. A part of the building is destroyed in a fire and is eventually repaired.

The Howard Memorial Library Association sells the building to the Times-Picayune Publishing Company and is converted into a radio station headquarters.

Nearing the centennial of the Howard Memorial Library, Patrick F. Taylor and Phyllis Taylor purchase the building. They commission the New Orleans firm  Barron and Toups to plan and supervise the Library’s restoration.

The library is rededicated as the Patrick F. Taylor Library in June.